Yesterday the signing of the Abrahamic Agreements, at the White House, between Israel, the Emirates and Bahrain - the first between Israel and an Arab state since 94, when it established diplomatic relations with Jordan.&nbsp; 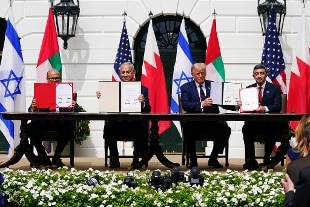 16 September 2020 Yesterday historic signing of agreements for the normalization of diplomatic relations between Israel and the United Arab Emirates and between Israel and Bahrain in Washington. "The terrorists want to hinder peace," said Israeli Prime Minister Netanyahu after the launch of rockets from Gaza to Israel and intercepted by the Israeli anti-missile defense system. While Palestinian President Abu Mazen says: "No peace without the end of the occupation".

The agreements of Abraham

The so-called Abrahamic agreements in exchange for the suspension of the annexation of the West Bank, were signed under the aegis of President Donald Trump, who co-signed them and presented himself as the peacemaker of the Middle East less than two months after the Election Day. With a ceremony at the White House, to which over 700 guests were invited, Trump wanted to celebrate what he called "the dawn of a new Middle East", a day that "no one thought was possible" and that "changes the course of history ".

Same tones from Israeli Prime Minister Benjamin Netanyahu, who spoke of "a new dawn of peace". "I know the price of war," Netanyahu said, citing former prime minister Yitzhak Rabin during the signing of the Oslo accords in 1993, now "we can end the Arab-Israeli conflict once and for all". Although the three countries have never been directly in conflict, the Emirati foreign minister said he wanted to "extend a hand of peace and receive a hand of peace", while his Bahraini counterpart has more explicitly called for a peace agreement. Israeli-Palestinian.

Netanyahu: "They will not be able to stop the peace"

"They want to prevent the peace", but "they will not succeed". This is what Israeli Prime Minister Benjamin Netanyahu said after the launch of rockets from the Gaza Strip against Israel while the agreements between the United Arab Emirates and Bahrain were signed with Israel in Washington. "I am not surprised - Netanyahu said on leaving Washington - by the fact that Palestinian terrorists fired rockets at Israel at the very moment of this historic ceremony".

The Abrahamic Agreements signed yesterday at the White House for the normalization of relations between Israel, Bahrain and the United Arab Emirates are "important for limiting Iran's influence in the Middle East". This is what the head of the Israeli military intelligence research division, General Dror Shalom claims, quoted from the Ynet site.

"Israel is perceived as strong by its enemies and is able to discourage them thanks to its high-quality intelligence, Air Force capabilities and proactive approach," said Shalom.

"Agreements with the Gulf states and all military operations are an important pillar to restrict Iran's influence across the Middle East and further impede its goal of obtaining nuclear weapons."

Abu Mazen: "No peace without the end of the occupation"

The office of Palestinian President Mahmoud Abbas makes it known that no peace in the Middle East is possible without an Israeli-Palestinian agreement. This is the first response to the agreements for the normalization of relations between Israel and the United Arab Emirates and between Israel and Bahrain, signed today in Washington. "The leadership - reports the Palestinian news agency Wafa - has warned, once again, that no peace, security or stability will be achieved for anyone in the region without ending the occupation and without the Palestinian people obtaining their full rights. as established or by resolutions of international legitimacy ".

Iran: Bahrain and the Emirates "responsible" for "consequences"

Bahrain and the United Arab Emirates will be the only ones "responsible" for the "serious consequences" of their agreement to normalize relations with Israel: Iranian President Hassan Rohani said today. "How could you join Israel? And then you want to give them bases in the region? You will be responsible for all the serious consequences that will ensue," Rohani explained during a speech broadcast on local television.

The Iranian president, who did not name Bahrain and the Emirates, made his remarks in the Council of Ministers the day after the signing in Washington of the normalization agreements between Israel and these two Arab Gulf states, under the leadership of the American president , Donald Trump. In his speech, the AFP explains, Rohani attacked "some states in the region" whose "leaders understand nothing of religion and ignore their debt [...] to the Palestinian nation".

On Twitter, Israeli forces (IDF) confirm that among the targets hit are a military compound and a site for the manufacture of weapons and explosives. At least eight rockets were intercepted by the Iron Dome system. One fell in the city of Ashdod, where - reports Ynet - three people were injured.

The army confirmed the reaction of Israel, whose combat planes and helicopters hit "an arms and explosives factory", "a rocket launching station" and an "underground infrastructure" of the Islamist movement.