Hamdan bin Mohammed: Dubai has a high-quality infrastructure that is strengthened by an integrated transportation system

His Highness Sheikh Hamdan bin Mohammed bin Rashid Al Maktoum, Crown Prince of Dubai and Chairman of the Executive Council, confirmed that the Dubai Metro is one of the success stories that Dubai has achieved thanks to the sound vision of His Highness Sheikh Mohammed bin Rashid Al Maktoum, Vice President and Prime Minister and Ruler of Dubai, which Don't just meet 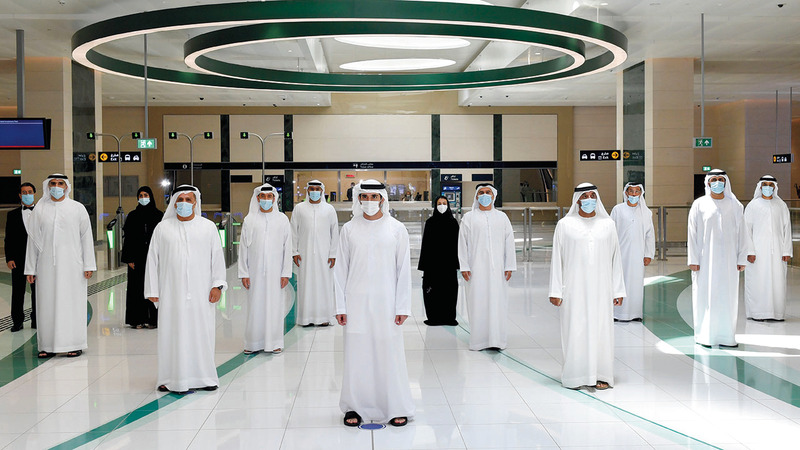 Hamdan bin Mohammed: Dubai has a high-quality infrastructure that is strengthened by an integrated transportation system

His Highness Sheikh Hamdan bin Mohammed bin Rashid Al Maktoum, Crown Prince of Dubai and Chairman of the Executive Council, confirmed that the Dubai Metro is one of the success stories that Dubai has achieved thanks to the sound vision of His Highness Sheikh Mohammed bin Rashid Al Maktoum, Vice President and Prime Minister and Ruler of Dubai, which Not only does it satisfy all the requirements of the urban growth of the city, it also goes beyond that to expand the implementation of the specific projects necessary to maintain Dubai's position among the fastest growing and developed cities in the world, and that thanks to this forward-looking vision for the future, Dubai has a high-level infrastructure supported by a transportation system. An integrated company that adopts the highest standards of safety and operational efficiency in the world.

His Highness added, during a visit to the "Route 2020" of the Dubai Metro, that “the Dubai metro is today the backbone of the public transport system that connects the various vital areas in the emirate, and one of the most important projects of the integrated mass transport system, with what it provides in terms of easy and comfortable movement for residents, in addition to His role in supporting economic activities in the emirate, in addition to his significant positive impact in preserving the environment, as it contributes to reducing carbon emissions.

His Highness indicated that the statistics show that Dubai residents depend on the metro as their preferred means of transportation, which confirms its strategic value as a vital project that supports the comprehensive development trends in the emirate, since the metro has transported since its opening in September 2009 about one billion and 560 thousand passengers, through 2.6 million trips, at a rate of commitment Global flight schedules are at 99.7%.

His Highness Sheikh Hamdan bin Mohammed bin Rashid Al Maktoum said in a tweet on “Twitter”: “We learned from His Highness Sheikh Mohammed bin Rashid Al Maktoum not to allow changes to transform the course of our goals .. The current global circumstance has not kept us from continuing to prepare to receive our guests among the best. It happened in the history of the oldest and largest international exhibitions, with the efforts of a team we are proud of for their achievements.

His Highness inspected the "route 2020" of the Dubai Metro, which extends from Jebel Ali station on the Red Line to the Expo 2020 station, with a length of 15 kilometers and includes seven stations, at a cost of 11 billion dirhams.

On his arrival at the "Jebel Ali" station of the Dubai Metro, His Highness was received by the Director General and Chairman of the Board of Directors at the Roads and Transport Authority Mattar Mohammed Al Tayer, where His Highness listened to an explanation about the 2020 route, which was implemented within the framework of the strategic vision of His Highness Sheikh Mohammed bin Rashid Al Maktoum. Vice President and Prime Minister of the State and Ruler of Dubai, in developing world-class infrastructure and services that meet the requirements of the continuous growth of Dubai's future city.

The length of the track is 15 kilometers, of which 11.8 kilometers above ground level and 3.2 kilometers below ground level, and includes seven stations, including an exchange station with the red line, an iconic station at the Expo site, three elevated stations, and two underground stations, and the track serves areas It has a high population density estimated at more than 270,000 people, and includes parks, Discovery Gardens, Al Furjan, Jumeirah Golf Estates, Dubai Investment Park, as well as the Expo site.

His Highness inspected the "Jebel Ali" station, which is a reciprocal station between the Red Line and the 2020 route, similar to the design of the current metro stations, in order to preserve the identity and shape of the stations on Sheikh Zayed Road. Its area is 8,800 square meters, its length is 150 meters, and its capacity is estimated at 17,000 passengers. An hour during peak times, about 320,000 passengers per day, and the station includes four train platforms, four bus stops, 17 taxi stands, seven stops for people of determination, and eight shops for commercial investment of 388 square meters.

After that, His Highness, the Crown Prince of Dubai, and his companions boarded the new Dubai Metro train, which has undergone some additions and modifications regarding the interior design of metro cars.

His Highness stopped at the Dubai Investment Park station, which is the second tunnel station on the track, and His Highness toured the station, which has an area of ​​27,000 square meters and a length of 226 meters, with a capacity of 13899 passengers per hour during peak times, and about 250 thousand passengers per day. The station includes two docks to board trains, four bus stops, 20 taxi stands, two stops for people of determination, and it also includes eight commercial investment shops of 315 square meters.

Then, for His Highness, a souvenir photo was taken with the directors of departments and divisions at the Railways Corporation.

After that, the Dubai Metro set off towards the "Expo" station, which is distinguished by its unique design in the form of airplane wings, to reflect the launch of the future city of Dubai towards innovation. His Highness the Crown Prince of Dubai and his companions looked at the sides of the station, which has a total area of ​​18 thousand and 800 square meters, and its length is 119 meters. Its capacity is 29,000 passengers per hour during peak times, and about 522,000 passengers per day, and the station includes three train platforms, six bus stops, 20 taxi stands, and four parking lots for people of determination, as well as nine commercial investment shops with an area of ​​264 square meters. The station has eight ticket machines (Kiosk) to buy and fill in Nol cards, and the station is linked from the eastern side with the Expo and COEX Expo, while it is linked from the western side with the mall and urban complex, and taking into account in its design integration with the public transport system, where stops are allocated for buses and vehicles The fare.

At the end of the visit, His Highness Sheikh Hamdan bin Mohammed bin Rashid Al Maktoum met a number of engineers at the Rail Agency who oversaw the implementation of Route 2020, where His Highness expressed his pride in the efforts and tender of the nation’s youth, who showed great skills in the completion of the project according to the approved timetable. Despite the challenges posed by the Coronavirus pandemic, His Highness took a souvenir photo with the citizen's working team.

Mohammed bin Rashid's vision is not only satisfied with meeting the requirements of urban growth, but goes beyond expanding the implementation of specific projects.

Dubai Metro is one of the emirate’s success stories and one of the most important “mass transit” projects, which provides comfortable mobility for residents.

We learned from Mohammed bin Rashid not to allow changes to transform our goals.

Kilometers along the "Route 2020" and includes seven stations, including "reciprocity" with the red line.

The Dubai Metro Route 2020 provides safe and easy transportation for visitors to the Expo, which will be hosted in Dubai on October 1, 2021 until December 31, 2022, and the regions of Dubai alike, and it will be a vital and strategic artery connecting various areas of Dubai with Al Maktoum International Airport in the future, and the capacity of the track is estimated at about 46 thousand passengers per hour in both directions (23 thousand passengers one way per hour).

According to the studies prepared by the authority, it is expected that the number of route 2020 users will reach about 125 thousand passengers per day in 2021, increasing to about 275 thousand riders per day by the year 2030, as studies have shown that about 24 thousand visitors per day use the Expo station to reach The site of the exhibition, and this number represents approximately 18% of the total number of daily visitors expected to the Expo.

The external designs of the stations of Route 2020 carried an architectural pattern distinct from the designs of the stations that were implemented along the red and green metro line, where the design included four different styles, namely: The iconic station within the Expo site, which was designed in the form of plane wings to reflect the launch of the future city of Dubai towards Innovation, and the reciprocal station linking Route 2020 and the Red Line of the Dubai Metro at Jebel Ali Station, which is similar to the design of the current metro stations, and the other two types of overhead and underground stations, which were taken into account when designing a greater capacity than the existing stations on the red line, and adding design touches that simulate Simplicity, modernity and sustainability requirements.

The interior designs of the stations came with a contemporary character and flowing lines derived from the four elements of nature, namely: air, earth, fire and water, in addition to the design of the Dubai of the future. The design of the stations was also taken into account and the integration with the public transport system was taken into account, where stops were allocated for buses and taxis, and parking spaces for loading And drop off passengers.