96 thousand new cases of "Corona" in India ... and France is about to announce "difficult decisions"

Yesterday, India recorded 96,551 new cases of "Corona" in a record daily jump, and while a medical survey showed that 6.4 million people in India may have contracted the virus by early May, France is preparing to announce new "difficult decisions", in an attempt to put an end to the escalation. The outbreak of the new Corona virus on its soil 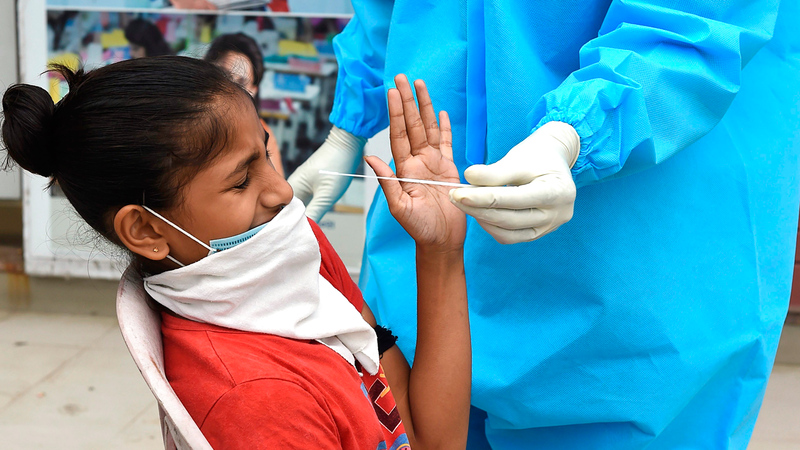 96 thousand new cases of "Corona" in India ... and France is about to announce "difficult decisions"

An Indian nurse takes a Corona swab for a boy in Ahmedabad, the largest city in Gujarat.

Yesterday, India recorded 96,551 new cases of "Corona" in a record daily jump, and while a medical survey showed that 6.4 million people in India may have contracted the virus by early May, France is preparing to announce new "difficult decisions", in an attempt to put an end to the escalation. The outbreak of the new Corona virus on its soil, after recording a record number of daily infections with the virus.

This comes at a time when the number of "Corona" cases around the world has exceeded the 28 million mark.

In detail, the Indian Ministry of Health data showed that the country recorded, yesterday, a record jump in new cases of Coronavirus, which reached 96,551 infections, bringing the total cases to 4.5 million.

The infection is spreading in India at a faster rate than anywhere in the world, and the only country most affected by it is the United States.

Death cases remained relatively low in the country, but it is an upward trend, as more than 1000 deaths have been recorded every day, for 10 days.

And a survey that included testing the antibodies to the Corona virus, in a random sample of India's population, showed that about 6.4 million people may have contracted the disease, by early May, according to the country's highest medical research body.

The Indian Council of Medical Research revealed that the results of the first national survey of serology indicate that 0.73% of adults in India were exposed to infection with the Coronavirus, i.e. a total of 6.4 million infections by early May 2020.

In Paris, the French government is offering new measures to confront a situation described as "very worrying", due to the outbreak of Corona.

The head of the Scientific Council, which advises the authorities, said this week that the government "will have to take a number of difficult decisions" within "eight to nine days, maximum."

French President Emmanuel Macron replied that "no panic will ever be surrendered."

The French health authorities recorded the highest daily increase in coronavirus infections, since the start of the pandemic.

The French News Agency quoted the Ministry of Health on Thursday night that 9,843 new cases of the virus were recorded, during the past 24 hours.

Many doctors fear intensive care units will be overwhelmed with patients in the fall, as was the case in March.

The United States and Brazil are still at the forefront of the countries that recorded the largest number of deaths (191727 in the United States, 129,522 in Brazil, as of Thursday evening).

And 28 million injuries have been recorded in the world to date, according to official figures for countries.

According to Johns Hopkins University, the total number of injuries reached 28,47,828 yesterday, while the deaths reached 907,377 cases, while more than 18 million people recovered from the disease around the world.

The number of cases of Coronavirus has exceeded the eight million mark in Latin America, the region with the largest number of infections in the world, although there are indications that the virus is now spreading more slowly in some countries.

In Spain, daily infections with the Coronavirus have increased by the most since mid-April, as the country struggles to control new outbreaks of the disease, according to Bloomberg News.

According to the Ministry of Health data, the country recorded 4708 new cases during the past 24 hours, compared to 4,137 recorded the day before yesterday.

This was the highest number of infections since mid-April, but it is still well below the levels of about 8,000 that were witnessed during the peak of the crisis in the spring.

The government said that 241 deaths were recorded in the past seven days due to Corona.

And in Germany, many intend to hold new demonstrations, today, in many cities to protest the government's measures to combat the Corona virus.

The city administration of Wiesbaden, in the central German state of Hesse, said that the protest campaign will be attended by about 3,000 people.

In Hanover, about 1,600 exhibitions will take part in government instructions on dealing with the virus.

In Munich, the organizers said that no demonstration was planned there, as the city’s administrative court upheld its administration’s decision to place the demonstration that was planned to be held on the Teresa lawns in the city under strict conditions for its holding, restricting the number of participants to only 1,000 people.

The authorities refused to hold a march through the city as well.

652 new cases of "Corona" were recorded ... and 8 deaths among Palestinians.