The Belgian imposes himself with strength in a sprint on a slight slope. Fourth Sagan, no Italians in the top ten. The general classification remains unchanged: Alaphilippe remains yellow jersey. Now the uphill arrival to Mont Aigoual 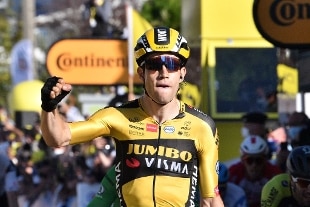 02 September 2020Wins one of the fittest men of this particular cycling season.

After Strade Bianche, Milan-Sanremo and a stage in the Giro del Dauphinato, Wout van Aert wins the fifth stage of the Tour de France with a sprint of strength.

At the finish in Privas, the Belgian burned Dutchman Cees Bol and Irishman Sam Bennett, who preceded Slovakian Peter Sagan.

No Italians in the top ten, Giacomo Nizzolo eleventh.

This is the result of the fraction from Gap to Privas, for 183 kilometers.

In the general classification of the

nothing changes, with the French Julian Alaphilippe who keeps the yellow jersey with a 4 "advantage over the British Samuel Yates and 7" over the Slovenian Primož Roglic, winner of the previous stage.

At 11 ”the other Slovenian Matej Pogacar, second in Orcières-Merlette.

At 13 ”the French Guillaume Martin.

At 17 ”the winner of the 2019 Tour, the Colombian Egan Bernal, together with the Dutchman Tom Dumoulin, and the other Colombians Nairo Quintana, Esteban Chaves and Miguel Angel Lopes.

A stage for sprinters with only two fourth category mountain Grand Prix and a slightly uphill finish, with the last section on a 4% gradient.

After the first arrival uphill at the 1,825 meters of Orcières-Merlette, the group takes a day of relaxation, with no escapes at the start, also discouraged by the side wind that recommends staying "indoors".

Nothing happens until the -9 km, when the men of Ineos - Bernal's team - stretch the group with a decisive acceleration.

In the final 6 km uphill, the sprinter teams battle it out to get their sprinters in the best conditions to face the sprint.

Sixth stage from Le Teil to the 1,560 meters of Mont Aigoual, with the Grand Prix of the first category mountain of the Col de la Lusette (1,351 meters) 13.5 km from the finish.

The overall length of the hamlet is 191 km.