During July 2019, Avaaz activist, Alfia Zeweb, confirmed in a video call with Facebook employees in India that about 180 posts, posted by users in the country, violate the rules of hate speech on Facebook. In the midst of the hour-long conversation, the most senior Facebook official got up 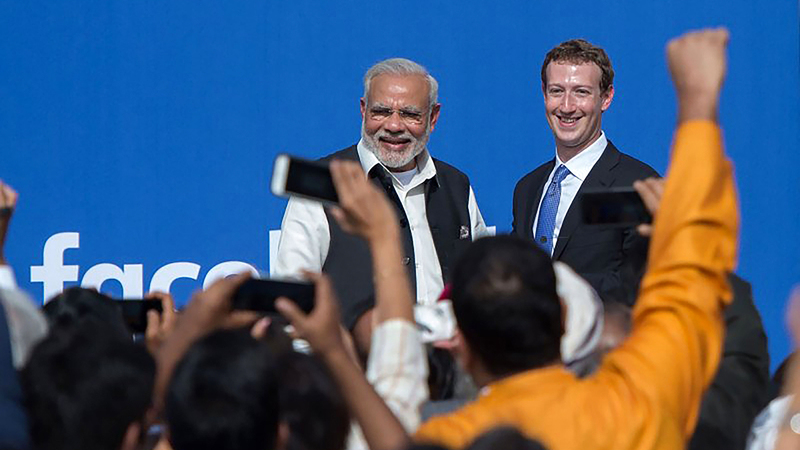 For fear of losing a popular market in India

During July 2019, Avaaz activist, Alfia Zeweb, confirmed in a video call with Facebook employees in India that about 180 posts, posted by users in the country, violate the rules of hate speech on Facebook.

In the midst of the hour-long conversation, India's top Facebook official, Shivnath Thukral, got up and walked out of the room with the pretext that he had more important things to do.

Among the posts is a controversial one sent by the Assam state legislator for the nationalist Bharatiya Janata Party, Shelditia Dev, the party led by Prime Minister Narendra Modi.

On this platform, this legislator published a news report about a girl who was allegedly drugged and raped by a Muslim man, and added in his own comment: “This is how Bangladeshi Muslims targeted our authentic people in 2019.”

But instead of removing this post, Facebook allowed it to remain on the Internet for more than a year, until Time magazine called Facebook, on August 21, asking why it had been kept without deletion.

Facebook’s response came as follows: “We discussed this matter when it was first reported to us (Avaaz). Our records confirm that it is a violation of hate speech, but we failed to remove it upon initial review, and that was a mistake on our part."

He acts on his own

Thukral was the director of public policy for Facebook in India and South Asia at the time, and part of his job was to pressure the Indian government on such matters, but he also acted on his own when users notified him of hate posts from politicians. Former Time employees tell.

Facebook admits that Thucral cut short his meeting with Zweb and left, claiming that he had not initially planned to stay with him for all that time at that meeting, and that he had only joined together to introduce Zoeb, whom he had known before during their work together on a previous job.

"Facebook" said, in a statement issued, that Thucral did not leave the meeting, because the issues raised were not important, as some parties claimed, noting that the company had taken measures regarding 70 of the 180 participants presented during the meeting.

The social media giant is under increasing scrutiny over how to implement hate speech policies when the accused are members of Modi's ruling party.

Activists say that some Facebook policy officials are very close to the BJP, and activists accuse Facebook of putting its relationship with the government first, while its stated mission is to remove hate speech from its platform, secondly, especially when the speech is emanating from politicians from the party. the ruler.

For example, Thukral worked with the party leadership during the 2014 BJP election campaign, according to documents reviewed by Time magazine.

Facebook's managing director in India, Ajit Mohan, denied allegations that Facebook showed a clear bias towards the BJP, and wrote in his post, published on August 21, titled: "We are open, transparent and impartial." : “Despite the diverse political affiliations and backgrounds, our employees perform their duties and interpret our policies in a fair and non-partisan manner, and decisions regarding escalation of content are not made unilaterally and by one person only;

Instead, it is subject to opinions by different teams and specialties within the company.

And "Facebook" published a special blog, after the Wall Street Journal, citing current and former Facebook employees, reported on August 14 that the company's chief policy officer in India, Anki Das, objected when Facebook employees wanted The others classify a politician from the BJP as a "dangerous person", and prevent him from using the platform, after he called for the shooting of Muslim immigrants.

Facebook says that Das's intervention was not the only reason for not banning Singh, and that the company has not yet decided whether the ban is necessary.

India is the largest marketplace for Facebook, with 328 million people using this social media platform.

About 400 million Indians also use the "WhatsApp" messaging service of Facebook, and this number represents a large portion of the 503 million Internet users.

The platforms have grown in importance in Indian politics;

After the 2014 elections, Das published an opinion piece saying that Modi won, because he used the same way he used Facebook in his election campaign.

However, Facebook and WhatsApp are also being used to spread hate speech and disinformation, which previously incited deadly attacks against minorities amid growing social tensions across India, despite the company's efforts to suppress this information.

In February, a video clip of a political speech from the BJP, Kapil Mishra, was uploaded to Facebook in which he told the police that unless they expel the mostly Muslim protesters occupying a road in Delhi, his supporters would do the same.

Within hours, violent riots broke out.

"WhatsApp" with intent to kill

Whatsapp was used, too, with the intent to kill in India, for example, by Hindus, who attacked Muslims and Dalits, accusing them of killing cows, a sacred animal in Hinduism.

As a result, at least 44 people, most of them Muslims, died at the hands of these militants between May 2015 and December 2018, according to Human Rights Watch.

Many of the murders committed by Hindus take place after rumors spread on WhatsApp. Videos of extrajudicial executions are often shared, and victims are also beaten.

Time magazine learned that, in an attempt to assess its role in spreading hate speech and incitement to violence, Facebook has commissioned an independent report on the impact of this speech on human rights in India.

The report is being prepared by the American law firm Folly Huag, which will include interviews with senior Facebook employees and members of civil society in India, according to three people familiar with the matter, and an email message reviewed by Time magazine.

A similar report on Myanmar, released in 2018, detailed Facebook's failures to address the hate speech that contributed to the genocide of the Rohingya there the previous year.

But the activists, who spent years monitoring and reporting on hate speech by Hindu nationalists, told Time magazine that they believed Facebook was reluctant to post posts by BJP members and supporters because it did not want to fight battles with the government that controls the largest market. For the company.

Analysts and former employees say the way the company is organized exacerbates the problem, because the same people responsible for managing the relationship with the government also contribute to making decisions about whether or not politicians should be punished for hate speech.

“The main problem with Facebook is that only one body of the company is responsible for the policy of the rules of order and the satisfaction of governments,” Alex Stamos, former chief security officer at Facebook, tweeted in May.

The heads of local politics are usually chosen from the ruling political party, and they are rarely chosen from ethnic, religious or disadvantaged sects, and this makes the decision, of course, in the interest of the powerful.

Some activists are so frustrated with the Facebook policy team in India that they are starting to go beyond it completely in reporting hate speech.

After Thukral withdrew during the meeting, Avaaz decided to report the hate speech directly to Facebook headquarters in Menlo Park, California.

"We found that Facebook's position in India is completely volatile, harsh and uninterested," says Zoyab, who has since left Avaaz.

Another group, who regularly reported on hate speech against minorities on Facebook in India, and asked not to be named, out of fear for the safety of its employees, said it has been doing the same since 2018. In a statement, Facebook acknowledged that some groups are doing so. It regularly monitors hate speech in India, and is in contact with the main Facebook headquarters. However, the statement emphasized that this will not change the criteria by which posts are judged as violating the company's rules.

The disclosure of these facts caused a political scandal in India, where opposition politicians called for an official investigation into "Facebook", because of its favoritism for Modi's party.

The news caused conflict within the company, too. In an open internal message, Facebook employees called on executives to denounce "anti-Muslim intolerance", and to do more to ensure that the rules for inciting hate speech were consistently applied across the platform, as reported. Reuters.

The letter claims that there are no Muslim employees on Facebook's India policy team.

Some activists are so frustrated with the Facebook policy team in India that they are starting to go beyond it completely in reporting hate speech.

The problem with Facebook is that one party in the company is responsible for the policy of the rules of order and the satisfaction of governments.

The heads of local politics are usually chosen from the ruling party, and are rarely drawn from ethnic, religious, or disadvantaged sects.

Whatsapp was used, too, with the intent to kill in India, for example, by Hindus, who attacked Muslims and Dalits, accusing them of killing cows, a sacred animal in Hinduism.