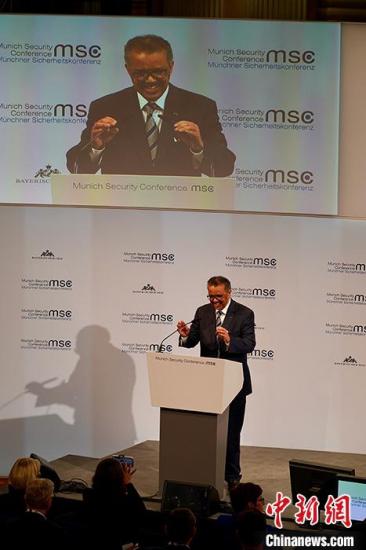 China News Service, May 7 (Xinhua) According to real-time statistics from Johns Hopkins University in the United States, as of 18:32 on May 7, Beijing time, there were more than 3.76 million cases of new coronavirus infections worldwide and more than 264,000 deaths . WHO agrees that France may have a new crown case in December last year; US Secretary of State Pompeo said in a modified manner that the new crown virus could not be confirmed from the Wuhan laboratory; the number of deaths in the UK exceeded 30,000; the number of newly confirmed cases in Russia reached a record high in a single day; Some countries in Africa and the Middle East have gradually relaxed control measures.

WHO calls for increased investment in basic health care

World Health Organization Director General Tan Desai said on the 6th that the world ’s annual expenditure on health is about 7.5 trillion US dollars, accounting for about 10% of global GDP, but the best investment is to promote health at the level of basic health care And prevent disease. He said: "If we learn anything from the new crown epidemic, it is that investing in health now will save lives in the future."

On the same day, Maria Van Kerkhofer, the technical lead of the WHO emergency health project, responded to the question that “new cases of crowns have appeared in France in December last year”, saying it is possible. They look forward to more countries going back to sample cases to obtain more comprehensive information.

On May 6, local time, in Washington, DC, workers wore masks to clean up and kill in the Capitol.

The data on the 6th showed that the number of newly diagnosed cases in Latin America exceeded 298,000. Among them, the single-day increase in the number of confirmed cases and deaths in Brazil, the most severe epidemic, reached a new high. As of the same date, a total of 125,218 cases were diagnosed in Brazil, with a total of 8,536 deaths. The Brazilian Ministry of Health stated that it is considering recommending "closing cities" in some severely affected areas.

As of 6th local time, there were 30,076 deaths from the new crown in the UK, making it the first country in Europe to have more than 30,000 deaths. British Prime Minister Johnson returned to Parliament after an interval of 6 weeks. He said that the government will announce the adjustment plan for epidemic prevention measures as early as May 10.

The Russian Epidemic Prevention Command issued a message on the 7th that in the past 24 hours, the number of new coronavirus infections in the country was 11,231, a record high, and the cumulative number of infections reached 177,160. Russian Health Minister Murashko believes that, given the current increase in the number of cases per day, it is too early to talk about the epidemic platform period.

In addition, Italy has cured a total of 93,245 new crown patients on the 6th, and the number of cured patients exceeded the number of existing patients for the first time. According to the latest data from Spain, the cumulative number of confirmed cases in the country has reached 221,447, and the national emergency will be extended to 0:00 on May 24.

On April 9, local time, employees of a company in Seoul, South Korea, were having meals. The company set up glass covers in the buffet area to ensure the safety of employees ’meals.

New cases in Singapore are still dominated by foreign workers

According to the report of the Central Ministry of Epidemic Prevention of the Republic of Korea on the 7th, as of 0:00 on the same day, South Korea added 4 more confirmed cases than the previous day, and a total of 10,810 cases were confirmed. Among the new cases, one case was initially classified as a community infection, which occurred in Gyeonggi Province. This is a confirmed case again after multiple days in the local area.

As of 12:00 noon on the 7th, Singapore had 741 newly diagnosed cases of new crowns, with a total of 20939 cases diagnosed and 20 deaths. The new cases are still dominated by foreign workers living in dormitory areas. The Singapore Armed Forces Barracks has reconstructed 6 rehabilitation and isolation facilities that can accommodate 5,200 people.

Under the global epidemic, many people in all walks of life persist in their jobs in order to protect people's daily lives. The picture shows the staff of the Turkish water delivery station.

According to the statistics of the African Center for Disease Control and Prevention, on the 6th, a total of 50,206 newly diagnosed cases in the African region, a total of 1967 deaths, and a total of 17,021 cases were cured.

South Africa is still the most severely affected country in Africa, with a total of 7808 cases diagnosed and 153 deaths. South African epidemiology expert Harry Moultrie (Harry Moultrie) said on the 7th that in the next few months, the number of confirmed cases in South Africa may increase rapidly, and the country's medical system will be under great pressure.

Although the epidemic continues to spread, African countries such as Uganda, Benin and Mauritania have gradually loosened control and started to resume production.

As of the 6th, the cumulative number of confirmed cases of new crowns in the Middle East has exceeded 350,000. Many countries have gradually relaxed the prevention and control measures when the epidemic situation has stabilized.

According to the latest news from the Ministry of Health of Iran, a total of 103,135 new crown cases have been diagnosed in Iran, of which 82,744 have recovered and 6,486 have died. The Iranian Ministry of Health announced on the 6th that although the epidemic is still spreading, it has slowed down overall. At present, Iran has divided various regions into different risk areas, and various industries and industries have started to resume work in an orderly and hierarchical manner under the guidance of the government.

Turkish Health Minister Koca said on the 6th that the epidemic in Turkey has been brought under control and the first stage of the fight against the epidemic has been completed, and is now entering the second stage of a "controlled social life". People must observe two basic principles: wear masks when going out and maintain social distance. At present, a total of 131,744 new crown cases have been diagnosed in Turkey.