Violations of the Houthi coup militias of the Arab Alliance to Support Legitimacy in Yemen continued to cease fire despite their extension for an additional month, as escalating fronts in the capital, Sanaa, witnessed escalating confrontations and military operations, along with continued fighting on the White and Dhali fronts, while 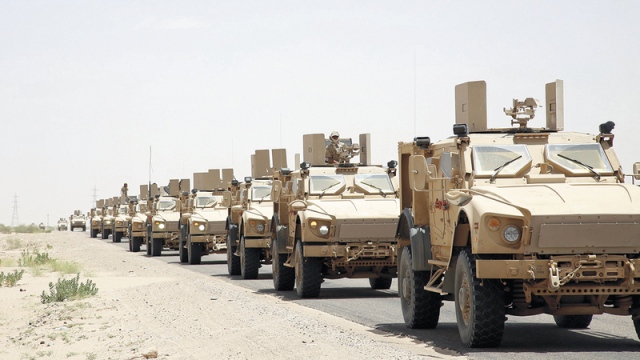 Violations of the Houthi coup militia of the Arab Alliance to Support Legitimacy in Yemen continued to cease fire despite its extension for an additional month, as escalating fronts in the capital, Sanaa, witnessed escalating confrontations and military operations, as well as continued fighting on the White and Dali fronts, while continuing their violations of the armistice in Hudaydah, which revealed Sources about withdrawing the UN observers against the background of the Corona pandemic.

In the details, the battles and military operations continued in the fronts surrounding the Yemeni capital, Sana'a, on the impact of violations of the Houthi coup militia militia to the ceasefire initiative announced by the Arab coalition and Yemeni legitimacy on the eighth of this April, and was extended the day before yesterday for an additional month.

Field sources confirmed that the army forces thwarted attacks and infiltration attempts by the Houthi militia on various fronts, most notably in Nahham Sanaa, the narcotic in Sarwah Marib, and other on the Jawf fronts, which are all fronts that surround the capital from the eastern and northern sides.

The sources confirmed the killing of the leaders of the Houthi militias, Hussein Marah, the leader of the Steel sector, and Najd al-Ataq in Nahham, and the Houthi leader Khalil Makram, leader of the Houthi groups in the Al-Jawf Junction Front during the past two days, along with more than 101 Houthis, including prominent leaders who fell during the fighting in the vicinity of the capital.

The commander of the Sarwah Front in the ranks of the Yemeni army, Brigadier Ahmed Abu Asbaa, confirmed in press statements the collapse of the militia fronts in the fronts of the capital.

Brigadier General Abu Asba said that the army and tribesmen thwarted a plan and militia attack in southern Sarwah, after careful monitoring throughout the past period of their movements in the region until the moment of their offensive, stressing the elimination of three Houthi battalions that had been preparing for this battle for two months.

He pointed out that the army and the tribes have been fighting battles with the militias for 100 days in the vicinity of the capital without stopping, despite the announcement by the coalition and the army to stop the fire on April 8, but the militias reject the armistice and continue their military operations on all fronts.

Military sources have confirmed the death of 741 Houthis on the fronts of Sana'a, Al-Jawf and Naham, including 67 leaders from the first rank, and 46 from the leaders of the Hussein Brigades, al-Mut, al-Haydari, and Hanshan al-Thiqa, all of them are sectarian battalions among the militias.

In Al-Jawf, the army forces backed by the tribes managed to liberate Jabal al-Ja`sha, east of al-Hazm, the provincial capital, on Friday evening.

In Al-Bayda, military sources in the Brigades and Southern Giants Brigade forces confirmed that they were able to control the highest summit in the Thurra Front in the district of Makeras, which includes the military militia's operations and communications room.

It stated that the joint and the giants launched a three-pronged attack on Houthi communities concentrated in the hill and central sites, and took full control of them.

The sources pointed out that the importance of controlling the highest mountain of Tharra lies in securing the villages and areas of the Lauder and the locations of the joint forces' concentration from repeated and indiscriminate shelling launched by the Houthi militia on a daily basis.

The joint forces and the giants confirmed the death of 17 Houthis, including a field leader, during the confrontations that took place between the two sides on Friday evening and yesterday morning at the fronts of Maceras, and led to the liberation of the highest summit in a fortune after having controlled it over the past five years.

In al-Dhalea, the battles resumed between the joint and southern forces on one side and the militias on the other side in the northern and western fronts of the Qataba district, near the Al-Hashah district between the Al-Dhalea and Ibb governorates.

Military sources in Al-Dhale'e indicated that many of the dead and wounded were among the Houthis, and their members were unable to withdraw their bodies from the reefs of the area.

In Al Hudaydah on the western coast of Yemen, informed sources revealed that the United Nations was withdrawing its monitors from the ceasefire monitoring committees, against the backdrop of emergency variables linked to the emerging Corona virus pandemic.

The sources pointed out that the internationalist General Abhijit Goha had held meetings during the past days with the Houthi leaders, with the aim of reviving the Stockholm Agreement for Hodeidah, but it failed. Unless since December 2018.

Meanwhile, the militias continued their violations of the armistice in the West Coast, and yesterday morning, they shelled several locations in the sector south of the district of Al-Tahita, concentrated in the mountainous areas and Al-Faza, using mortar shells and machine-gun fire extensively. Militias also targeted the city of Hays, south of Al Hudaydah, with machine and medium weapons, intensively, as the days of the holy month of Ramadan entered, and a number of farms were attacked.

741 Houthis were killed on the fronts of Sana'a, Al-Jawf and Naham, including 67 first-class leaders.

The Yemeni army fails attacks and infiltration attempts by militias on the Nahham, Marib, and Al-Jawf fronts.