Kamikaze drones will replenish the arsenal of the Russian tracked combat robot Marker. This was announced by the deputy head of the Foundation for Advanced Research Vitaly Davydov. Shooting tests of a crewless car should be held this year. Kamikaze drones are adopted by many countries of the world, including Russia. This type of military equipment is equipped with a warhead that explodes when it comes into contact with or in close proximity to it. According to experts, kamikaze drones are necessary for the Russian army to fight terrorists, and will also allow them to overcome enemy air defense systems. 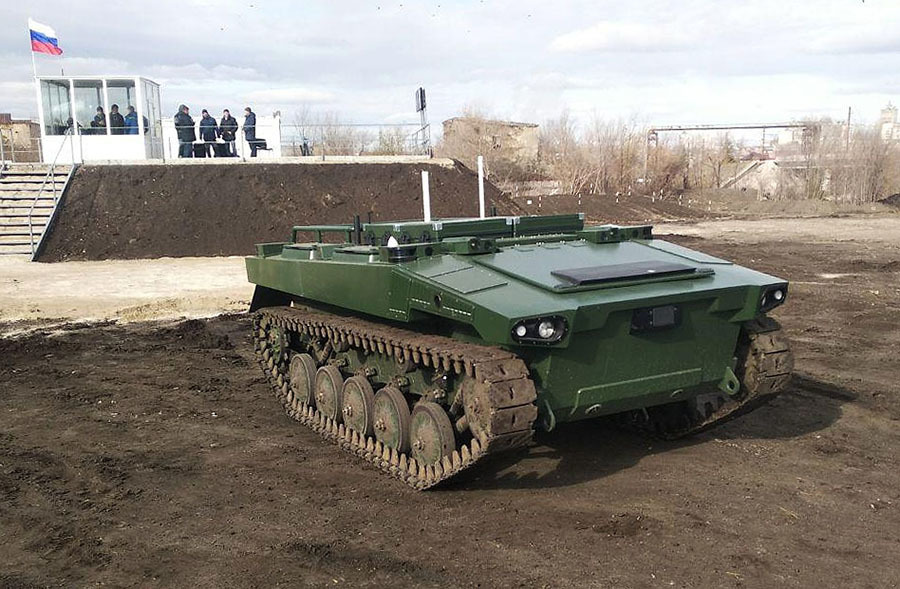 The Russian crawler robotic complex Marker will be equipped with kamikaze drones and reconnaissance drones. This was told by the Deputy General Director of the Foundation for Advanced Research (FPI) Vitaly Davydov.

“It is planned to equip the Marker with unmanned aerial vehicles that provide both reconnaissance and destruction of enemy targets,” Davydov said in an interview with RIA Novosti.

As explained by the top manager, we are talking about the so-called barrage of ammunition, working on the principle of a firewall. The bottom line is that an UAV filled with explosives detonates as soon as it reaches the target. This method of defeating the enemy was previously known. It was used in the Navy: crewless kamikaze ships loaded with flammable or explosive substances were called firewalls.

The Marker project is being implemented by the Android Technology Research and Production Association (Moscow) together with the FPI. Work began in March 2018, after a year and a half, engineers created two prototypes equipped with a unified payload module and a UAV cassette launch module. Each drone "can perform tasks both as part of a group and individually," the FPI says.

For the first time, Marker models were publicly presented in October last year at the Magnitogorsk test site of robotic systems and complexes, where their undercarriage was tested. The design of the robot allows you to install two modules of weapons or devices on the tracked platform, depending on the intended tasks.

The developers expect that their offspring will be able to serve as a link between ground crewless systems, unmanned aircraft and special forces. In 2020, Marker’s firing trials are planned, moreover, "offline, using various types of payloads."

The leading military powers began actively acquiring kamikaze drones from the 2000s. Israel is considered the leader in this area, and its armaments include the Harpy, Harop, Green Dragon Orbiter 1K and Hero UAV firewalls. They are designed to destroy manpower, engineering structures, surface and land equipment.

Also from foreign countries, the United States, China, Iran, Turkey, the United Kingdom, Poland, Ukraine and other countries announced the development of kamikaze drones. Despite this, information about the combat use of this weapon is extremely stingy. The media reported only a few cases.

So, according to the Armenian side, in early April 2016, during the escalation of the Karabakh conflict, the Azerbaijani Armed Forces used Harop percussion devices purchased in Israel.

The site of the developer of this UAV Israel Aerospace Industries reports that the drone is launched from ground launchers and is controlled by the operator. The serviceman directs the drone to the target, focusing on external sources of target designation or on the data of the video camera with which the device is equipped. If necessary, the operator can cancel the attack and Harop will continue to fly normally.

It is also possible that on September 14, 2019, during the attack on the Saudi Aramco refinery in Saudi Arabia, kamikaze drones were also used. In a commentary on RT, military analyst Yuri Lyamin noted that Riyadh has not officially voiced the fact that the enemy used such ammunition, however, according to him, the expert community has no doubt about this.

“The attack of drones on Saudi Aramco, including the Kamikaze UAV, demonstrated the high combat potential that is contained in this seemingly simple weapon. Such devices can be used en masse, thereby disorienting the air defense system, ”Lyamin said.

As explained by RT professor of the Academy of Military Sciences Vadim Kozyulin, kamikaze drones can be launched from a catapult or a special launch container that can be installed on land and offshore platforms.

“A suicide drone is a type of reconnaissance-strike UAV type. The difference is that the kamikaze apparatus is equipped with a warhead and "dies" in case of combat use. This is a hybrid of a cruise missile and a drone familiar to us, ”said Kozyulin.

According to the expert, the power of the explosive in a kamikaze drone, as a rule, is several kilograms, the range is tens of kilometers. An explosion occurs when in contact with a target or on approaching it.

The main advantage of an air fire over a cruise missile is its cheapness and ease of use. At the same time, a kamikaze UAV has less damaging power, range and speed, said Kozyulin.

“In my opinion, such devices are convenient to use when conducting tactical reconnaissance in local conflicts and when carrying out anti-terrorist operations. A kamikaze drone operator can immediately destroy a target after it is detected. But against a high-tech enemy equipped with electronic countermeasures, it will be problematic to effectively use such a drone, ”says Kozyulin.

The first mention of the development of domestic kamikaze drones leaked to the media in 2016. In particular, it was reported that one of the light Russian drones would be modified under the munition. Currently, the general public knows two types of Russian air firewalls - both were developed at the ZALA AERO company (Izhevsk), which is part of the Kalashnikov concern.

Last February, at an international defense exhibition in Abu Dhabi IDEX-2019, the company demonstrated the KUB-UAV strike drone model, designed to hit “remote ground targets.” The length of the apparatus is 1.2 m, the payload mass is 3 kg. As the developer clarifies, UAV tests have already been completed.

“The shock unmanned complex (KUB-UAV. - RT ) delivers a special load according to the coordinates of the target, which are set manually or according to the image from the target guidance load. The advantages of the system include: high accuracy, hidden start-up, silent operation, ease of use, ”says ZALA AERO.

This air-borne firearm has a non-standard drone shape that resembles a cruise missile in outline. The device is made according to the longitudinal biplane with two sets of X-shaped planes. Another feature is its pre-contact fuse (detonation occurs before contact with the target).

The ZALA Lancet-3 weight is 12 kg, the payload weight is 3 kg, the radius of damage is up to 40 km, and the speed range is 80–110 km / h. The drone is equipped with coordinate and combined guidance systems, as well as a television communication channel that transmits an image of the target.

In the video presentation of the developer, “ZALA Lancet-3” is presented as “an intelligent multi-tasking weapon that can independently find and destroy a target”.

Yuri Lyamin believes that kamikaze drones will expand the arsenal of the Russian army in low-intensity conflicts, during anti-terrorist operations and to overcome enemy air defense. According to him, today airborne firefighters from a rather primitive type of weapon are being transformed into a high-precision weapon.

“The popularity of kamikaze drones in the world is constantly growing, and therefore it is very important that the Russian Armed Forces have a variety of types of these weapons, including large-sized ones with a jet engine. Their use will allow without loss to carry out some military operations, and if necessary to overcome the air defense, ”concluded Lyamin.