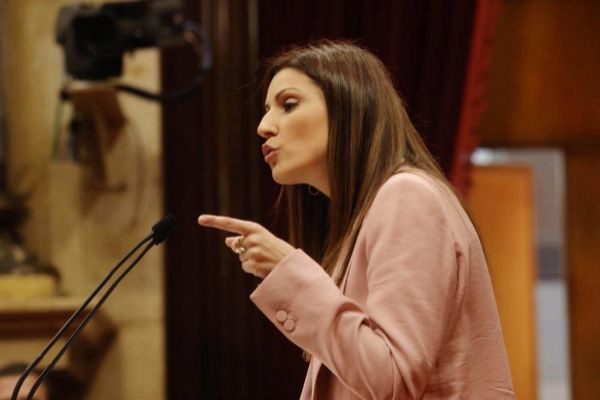 Citizens has turned his motion of censure against Quim Torra into a direct attack on socialism for his refusal to support the expulsion of the president of the Generalitat from the post after he expressed his support for the CDRs who entered prison by order of the National Court accused of preparing terrorist acts to respond to the 1-O ruling.

"The Democrats cannot stand alongside those who support violence and the bankruptcy of coexistence. We would expect the vote of all constitutionalists in this Parliament," said the spokesman for the orange formation, Carlos Carrizosa, while his candidate for the The Presidency of the Generaliat waited for its turn of intervention from the bench and its antencer, Inés Arrimadas, and the leader of his party, Albert Rivera, watched from the guest box the progress of his maneuver of attrition to socialism at the gates of the elections General 1O-N.

"Is it really not enough, Mr. Sanchez?" Carrizosa asked himself before pointing to Torra as "the ultimate champion of the coup to democracy" and the instigator of "civil disobedience" to react to the Supreme Court ruling.

Roldán has taken over to vindicate the "firmness" of his party "in defense of freedom" and has considered that constitutionalism "has the obligation to recover the spirit of October 8, 2017, when he joined" against the breaking of the constitutional order consummated with the holding of the illegal referendum of 1-O.

The deputy of Citizens has asked to support her motion to put "the first stone of a Catalonia without process " because "the safety of all Catalans is at stake" and knock down a president who "jelly and protects the violent".

This afternoon the debate will be resumed in the Parliament and a motion will be put to the vote without any chance of prospering, since only the four deputies of the PP have pledged to support it. The PSC will refrain and the commons plan to vote against the expulsion of Torra with the three separatist parties, that is, JxCat, ERC and the CUP. Thus, the Citizens initiative will only obtain 40 of the 68 votes necessary to expel Torra.

Today's is the fourth motion of censure that is presented in the Parliament and the third that is voted. The first was presented by the PSUC in 1982 against Jordi Pujol, with Josep Benet as candidate for the Presidency. He only got 21 votes in favor, 53 abstentions and 56 against.

Pujol suffered his second motion of censure in 2001 with Pasqual Maragall as a candidate. Nor did it prosper on that occasion: 55 votes in favor 68 against and 12 abstentions. In 2005 it was Maragall who suffered another motion of censure. It was presented by the then leader of the PP Josep Piqué, but he did not vote when the popular leader found that he had no chance of prospering.

Politics The Parliament encourages the CoR and calls for rebellion

CataloniaThe link between Quim Torra and the CDR: the "targeted" family in the radical group News/Politics 2020-05-17T00:28:13.377Z
The controversy over the aparthotel further increases the tension between Ayuso and Aguado News/Politics 2020-08-07T08:25:37.482Z
The Catalan independence movement defies the Constitutional again with a full censorship of the monarchy