The Swedish smuggling candy is sold in the middle of Copenhagen

Tons of sweets that are suspected to have been purchased black have been sold to Danish customers in Copenhagen. Danish authorities have, with increased intensity, resorted to the candy stores in the hunt for contraband candy from Sweden. 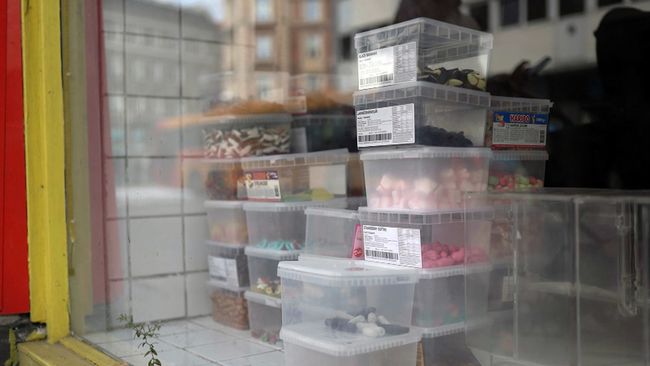 It is the first Friday in June 2017. Then Danish inspectors carry out a raid on eight candy stores in the Copenhagen area. At the same time, food inspectors in Malmö are targeting five wholesalers.

The raid, which was named Tors Hammare, became the start of the Danish-Swedish collaboration against the candy cheat.

- What we found during Tors Hammare were deficiencies in how businesses can track their food, probably because they were traded black. At the same time, we were able to compare invoices and documents in both Sweden and Denmark, says Arvid Nordland, unit manager at the environmental administration in Malmö.

And the problems that were discovered led to food controllers on both sides of the strait intensifying the controls.

This has led to the discovery and stopping of up to a hundred tonnes of old and counterfeit sweets in Malmö.

Confiscated sweets in Malmö. Photo: SVT The final destination of the candy is Danish candy stores

But the raid also led Danish authorities on track to the Danish customers - and millions of kronor in lost tax revenue.

- We can note that Danish smaller businesses drive to Malmö and fetch sweets, and so they do not pay fees and have no traceability of the goods, says Michael Rosenmark, head of the Food Board's travel team.

Photo: Fredrik Svenningsson 68 tons of candy in the candy store could not be traced

A smaller candy store in central Copenhagen was one of the eight stores that were visited by the Danish food control during the raid. Then the owner could not show from where he bought 68 tons of sweets and chocolate.

These were sweets that had been sold to Danish customers for eight months and corresponded to 72 percent of purchases and sales during that period.

The authorities suspected that it was about black trade. Therefore, the police were also notified.

And similar deficiencies were found in all eight stores. Tons of candy sold to unknowing customers where there are no invoices showing where the candy was purchased or when it was purchased.

- We see that there are smaller businesses that just want to make a little more money. But we also see that criminal gangs are behind this, says Mikael Rosenheim.

Cheating with VAT and sugar fees means that the Danish state can be deceived by the equivalent of SEK 46,000 per tonne of sweets.

Photo: Fredrik Svenningsson "We buy our candy from Malmö"

The candy store later went bankrupt and was taken over by another owner. When SVT visits the store it has changed its name but is in the same premises. The new owners have had no problems with food control.

But Malmö's role as a candy center for Danish stores seems to continue to be important in the future.

When we ask where the new owners buy their candy, the answer comes quickly:

- We buy our candy from Malmö.