Mansouri from space: I promise you good things 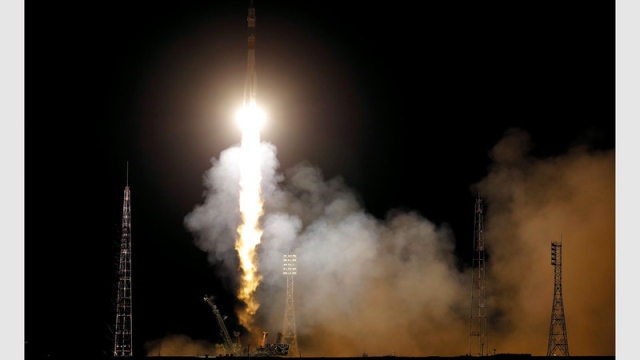 The first Emirati astronaut, Hazza Al Mansouri, entered the International Space Station after the success of the Russian spacecraft «Soyuz MS15» in access to the International Space Station and docking, and spoke during a direct contact with his family from within the station: «I send my greetings and greetings to leaders "The ambition of the late Sheikh Zayed bin Sultan Al Nahyan, may God rest his soul, embraces the stars now," he said.

Al-Mansouri said in an audio recording, upon his arrival at the International Space Station, midnight last night: «Peace be upon you .. Thank God, we arrived the station .. And I thank you, things are good .. Nice view of the earth from this place, and I can see part of the Earth from Here .. God protect you .. And salute the people of the UAE all ».

The Mohammed bin Rashid Space Center announced the success of the Russian spacecraft «Soyuz MS15» in the arrival and docking of the International Space Station, after its launch from the Baikonur space station in Kazakhstan, carrying the first Emirati astronaut, Hazza Al Mansouri, in the historic achievement of the UAE is the first Practical steps in the discovery of space and access to the field of science and research.

Hazza Al Mansoori, who was on board the Soyuz MV, was transferred to the center on a live broadcast from his Dubai headquarters. S15, to the International Space Station, in the first manned mission in the UAE, amid the follow-up and anticipation of a group of engineers at the Center for Earth Observation Station in Moscow, belonging to the Russian Space Agency «Roskosmos», and the NASA Earth Station «NASA» in Houston, as well as At the main ground station of the center in Dubai and around the world.

The live broadcast of the launch witnessed large crowds of citizens and residents of the Exhibition Center in Abu Dhabi, and Mohammed bin Rashid Space Center in Dubai, amid the feelings of happiness and pride for the success of the launch.

Two and a half hours before the launch, the astronauts boarded a Soyuz rocket in preparation for the completion of preventive measures (breathing system in the vehicle), in addition to conducting system tests, equipping the vehicle and communicating with the relevant team at the ground station. The astronauts started their helmets, where the control system of the captain of the spacecraft began operating, the launch switch was introduced, and 60 seconds before the launch, the external power of the spacecraft broke off, and the internal energy was turned on.

35 seconds ago, automatic launches began, and the launch order was issued on the 12th pre-launch, with a Soyuz rocket set off at 05:57 pm UAE time.

During the launch, the Soyuz rocket propulsion was provided by the four side motors, while igniting the rocket's central fuel, or the basic mass, to provide additional thrust. The rocket then began maneuvers to get the right direction to the desired orbit. The crew had an acceleration of up to 1.5 G.After two minutes of flight time, the rocket reached a height of 40 km.At this stage, the lifeboat at the top of the rocket was abandoned.A few seconds later, the four engines stopped burning after the fuel ran out. Aspects of the rocket and finish the stage First meet.

As Hazza al-Mansouri appeared on television from the Baikonur station in Kazakhstan, the hall was shaken with applause, and before he launched into the space he played in the hall of the National Peace, and the audience began to chant it loudly, until the moment of the launch came amid cheers and Zagard and applause from the followers of the event.

Following the launch of the launch, Sheikha Al Maskari, Chief Executive Officer of Innovation at the Emirates Space Agency, expressed her happiness and pride in the presence of an Emirati astronaut, stressing that this success is the result of continuous years of efforts that have put the UAE in the ranks of space countries.

"The arrival of Hazza Al Mansouri to the International Space Station is only a starting point for the emergence of dozens of astronauts in the near future," Al Maskari told Emirates Today. "The Emirates Space Program is based on sustainability and aims to create qualified cadres to become one of the best." Experts, scientists and pioneers in the field of space », stressing that the state has ambitions and financial, scientific and human potential to qualify for this.

For details on the three stages from the moment of launch, please click on this link.

“My friend, shave!” Said Emirati astronaut Sultan al-Neyadi in a tweet on Twitter. I am sure that as ambitious as Zayed, there is no better thing to carry, and when you aim your lens to take a picture of our homeland again, it will not be the lens of your phone, but it will be his lens from the International Space Station, so be careful to share your journey moment by moment, because our hearts with you and our eyes are You .. God protect you, Hazza ».

Sister Astronaut: Hazza represents a generation that does not know the impossible

The sister of the UAE astronaut Hazza Al Mansouri, Shamsa Al Mansouri, expressed her happiness with the arrival of her brother in space to become the first Emirati to land on the International Space Station, stressing that the achievement made her brother the focus of the world, and has become a role model for the youth of his homeland and all Arabs.

“I am proud to be the sister of Hazza Al Mansouri, who became one of the sons of the country who realized the dream of the founding father,” she told Emirates Today on the sidelines of the live broadcast of Hazza Al Mansouri's launch into space. The late Sheikh Zayed bin Sultan Al Nahyan;

"Hazza represents a generation of citizens who do not know the difficulties or impossible, and face all the challenges for their homeland and their leadership, and therefore I do not worry about him, and I know that he is as much as he was assigned, and will return from his trip to benefit the country experiences and knowledge."

The main hall of the Abu Dhabi Exhibition Center was attended by hundreds of citizens, including officials, senior youth, school and university students, about two hours before the launch of Hazza Al Mansouri into space. While he was greeted by a citizen in an astronaut's uniform and taken with them. 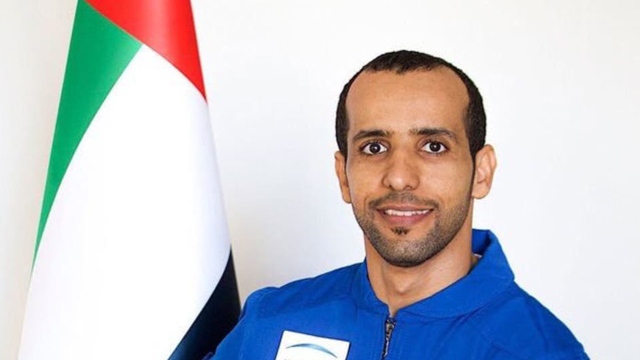 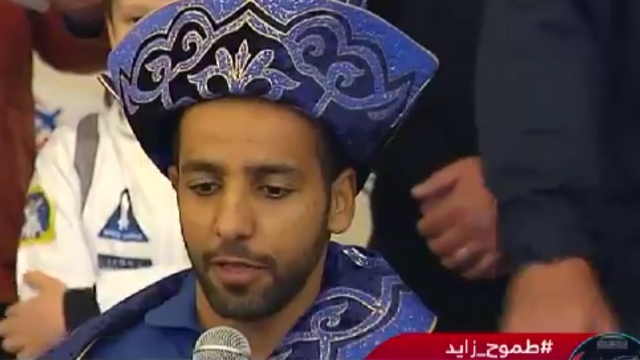 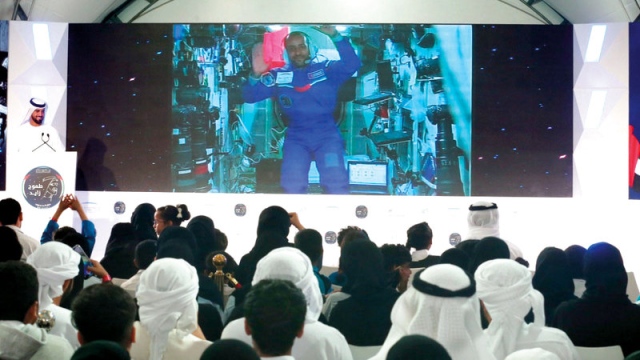 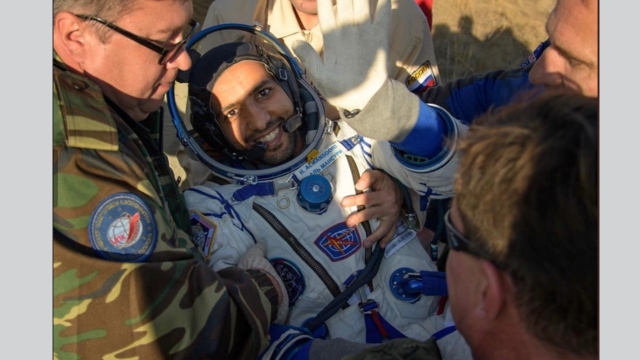 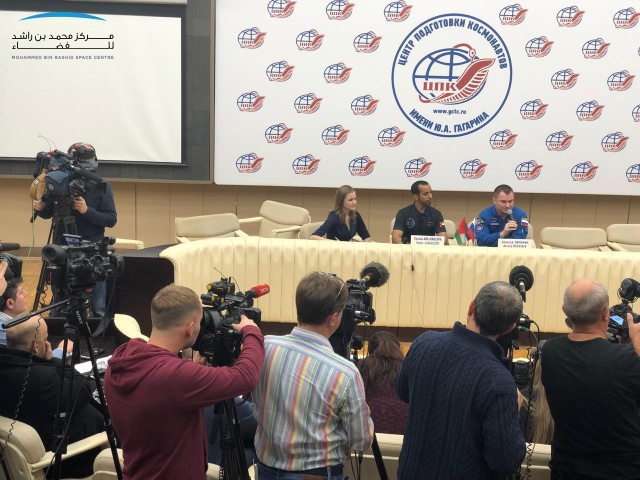 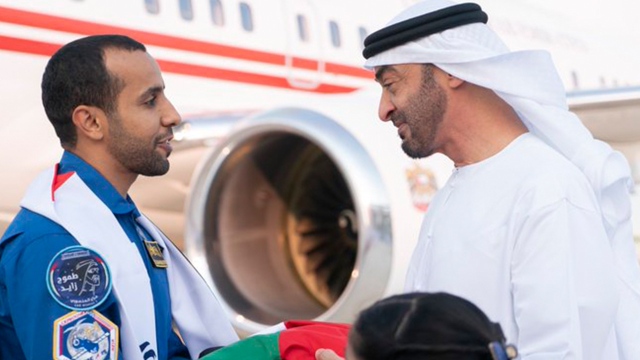 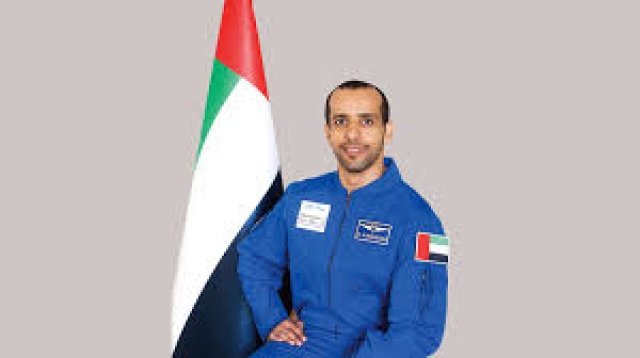 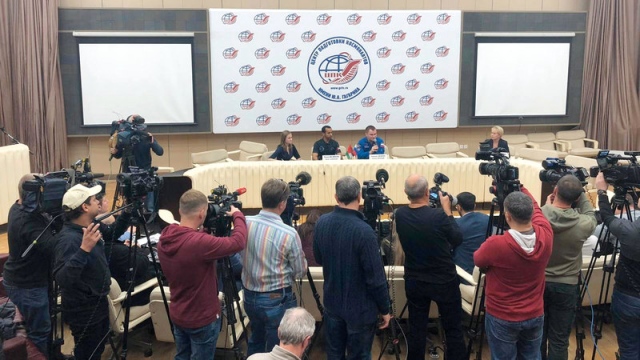 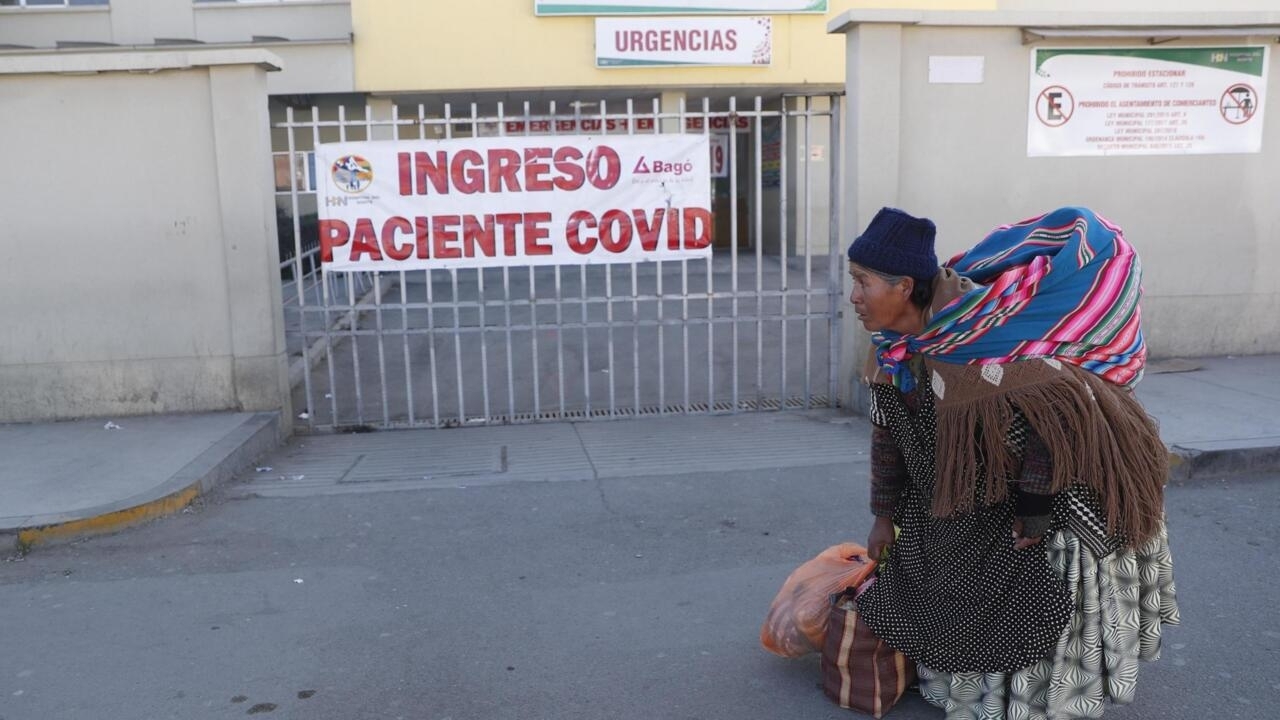 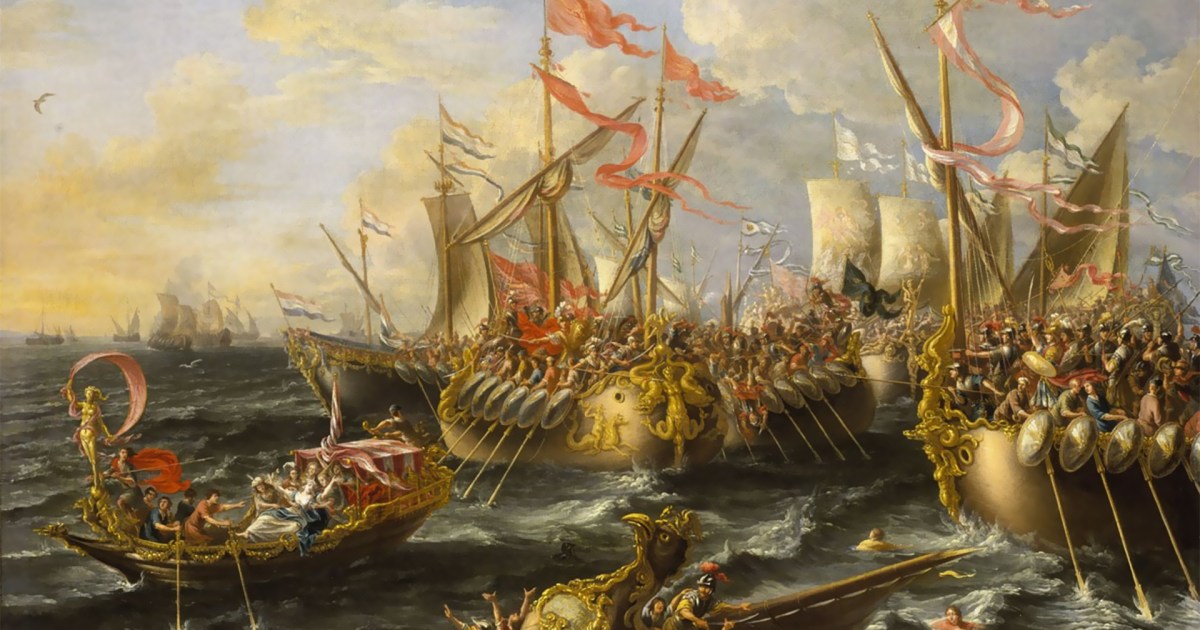 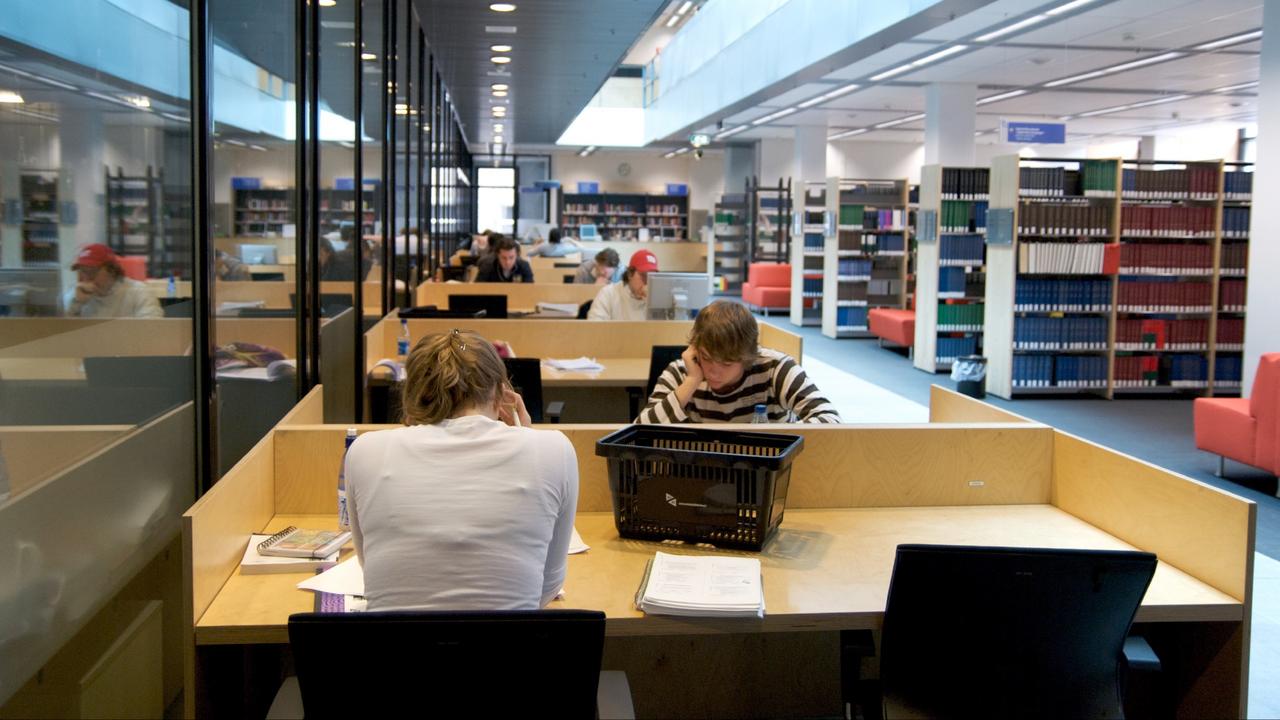 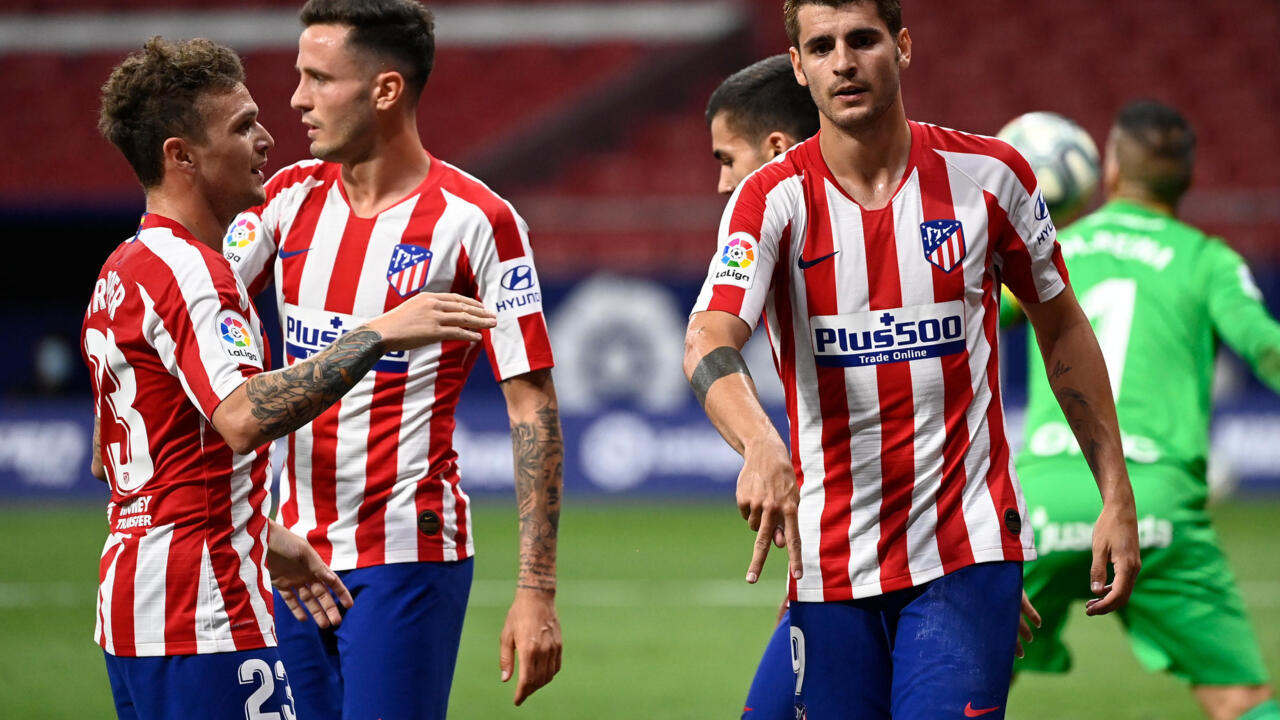