Will Iraq become the next powder keg in the region?

WASHINGTON (Reuters) - Israel's air strikes on military bases of pro-Iranian Popular Mobilization factions in Iraq portend a major war in the region, the US center of Stratfor warned on Tuesday.

The Center noted that there are reasons that may make Iraq the next barrel of gunpowder in the region, pointing out that Israel has a strong military motivation to bomb such sites as long as Iran seeks to transfer some of its weapons to Iraq after the successive strikes on its equipment in Syria.

The Center justified in a lengthy analytical article that Israel launched these attacks in order to prevent these reinforcements from being a reliable deterrent in a new theater of operations other than the Lebanese front in which Tel Aviv confronts Hezbollah fighters.

It should be noted that explosions have rocked inside four bases used by the Popular Mobilization during the past weeks, the latest on Sunday, and targeted its headquarters in the city of Al-Qaim, Anbar province, near the Iraqi-Syrian border; Air Force, where a US force is stationed north of Baghdad.

In addition to the military motive, there is a political motive behind the strikes, according to the Center, the aspiration of the ruling Likud bloc to win the general elections to be held on September 17.

Serious repercussions
But the Center warns again that Israel's expansion of its military operations will have serious repercussions on Iraq, the United States, Iran and Israel itself, because it will transfer the fighting to Iraqi territory; which will raise internal political problems that may affect Baghdad's foreign relations.

The site expects that such a scenario, if realized, will lead to the unification of Iraqis of all kinds of political spectrum to pressure Prime Minister Adel Abdul Mahdi to prevent Israeli violations of Iraqi national sovereignty.

Such pressure will exacerbate the volatility and turmoil in the Iraqi political system, creating problems for Baghdad with two capitals it does not want to get away from - Washington and Tehran.

Some circles in Iraq will, in this case, seek to punish the United States, as long as they cannot reciprocate directly against Israel, and this would confuse the US security relationship with that Arab state, potentially exposing US-linked companies and interests to retaliatory operations. Anti-Washington and Israeli forces inside Iraq.

Retaliatory operations will not be limited to US targets in Iraq alone, but will also extend to other countries, such as Saudi Arabia, the United Arab Emirates and Bahrain, which seek closer rapprochement with Israel.

If Iraqi anger against Israel rages to the point of launching attacks on US troops or materiel, any US retaliation could drag Iran into a proxy conflict and lead to a broader war between the United States and Iran.

On the other hand, Israel's success in expanding its operations to Iraq would make it bolder in implementing its anti-Iranian strategy, especially since it currently enjoys strong support from the White House.

Israel may consider "firmer" action against Iran in areas far beyond Iraq. One option may be to conduct intelligence operations in Yemen, where the Houthis have become part of Iran's strategy in the region.

Will Iraq become the next powder keg in the region?

Germany: Use in powder keg Iraq 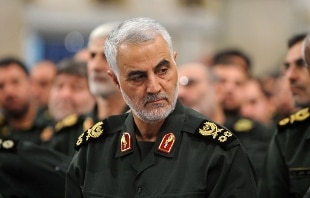 Iraq, an appeal for calm from China: "To the USA especially"

Zarif: USA turned the Persian Gulf into a powder keg Netanyahu seeks votes: "I will annex the Jordan Valley"