Half a million government employees in an "unprecedented" strike paralyzes Tunisia

About 650,000 Tunisian government employees entered a general strike today, and thousands gathered in major protests after the government refused to raise wages, a move that could exacerbate tension in Tunisia amid threats from lenders to stop financing the Tunisian economy. 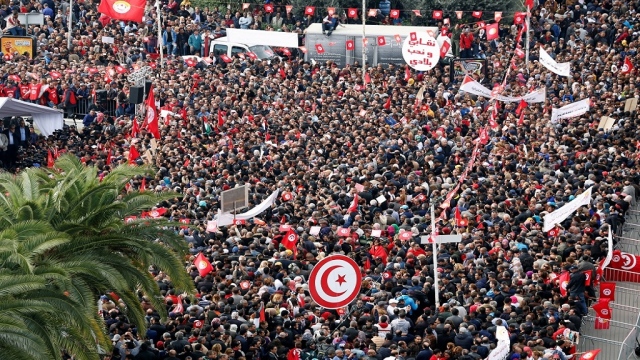 About 650,000 Tunisian government employees entered a general strike today, and thousands gathered in major protests after the government refused to raise wages, a move that could exacerbate tension in Tunisia amid threats from lenders to stop financing the Tunisian economy.

The escalation is a real test of Prime Minister Yusuf's ability to manage a strong battle and whether he can go ahead with stalled economic reforms amid a severe political and economic crisis.

Thousands gathered in front of the parliament's headquarters in the capital and chanted slogans calling for the departure of the government of the witness, demanding higher wages, banners reading "dignity strike" and "right and not privilege".

In several cities such as Sfax, Kasserine, Sidi Bouzid, Gabes and Nabeul, thousands also gathered in protest against the government's decision to freeze wages.

Schools and universities were shut down and public hospital workers were injured as well as ministries. Some services have maintained the minimum level of business conduct in the largest union recapitalization in recent years led by the powerful Labor Union, which has about one million members.

For its part, the Tunisian General Union of Labor said it had officially decided to organize a general strike in the government job sector after closing the door of negotiations with the government led by Yousef al-Shahed and protesting its "evasion of the implementation of its commitments, the increase in wages of employees and its inability to address the deterioration of the purchasing power of citizens Inflation, in addition to being subject to the dictates of the International Monetary Fund ».

The strike will also involve government officials working in ministries, central and regional administrations, and institutions subject to the provisions of the General Basic Law on Public Service.

The announcement of the strike comes as the government faces strong pressure from international donors to cut spending, freeze wages and cut back on subsidies to reduce budget deficits and curb debt.

The government is under strong pressure from international lenders, especially the International Monetary Fund (IMF), which is urging it to freeze wages as part of public sector reforms aimed at curbing the budget deficit.