After many misfortunes, because what is life but winning screens against the video game of destiny, four friends venture to share a flat in Barcelona. And up to here, it... 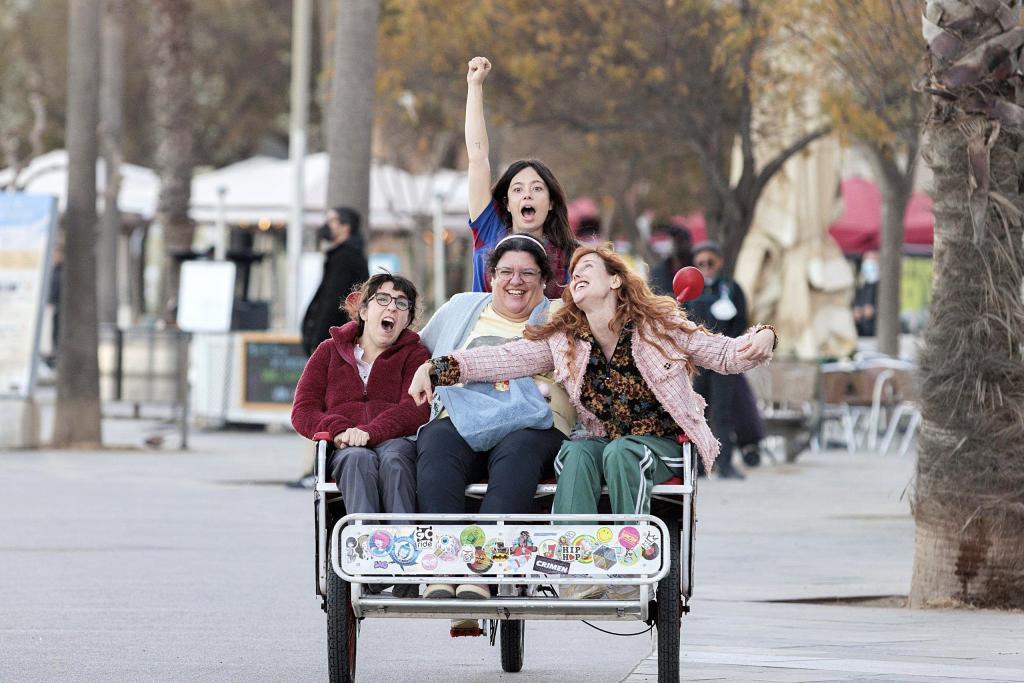 After many misfortunes, because what is life but beating fate's videogame screens,

four friends venture to share a flat in Barcelona

And up to here, the typical: unbreakable friendship, sex and boys, the frothy adrenaline of freedom but also the rules, the express pot of his youth about to burst the four walls of the apartment.

It could be another series of girls for girls, like

revisited on the shores of Barceloneta beach.

But this time the Manolo Blahniks have been changed due to

the intellectual disability of the four protagonists

of strawberry for the fierce medication, for the taboo of mental health, for the audacity to enter without knocking into the disjointed lives of Marga, Nati, Patri and Àngels,

(Movistar Plus+), written and directed by Anna R. Costa

), is one of the most daring proposals of Spanish fiction in these times of

is not easy despite the point-blank humor or

despite its immense actresses

is raw, it is direct, it is stark;

forces us to look into the eyes of that madness that always lurks around the corner;

is so easy that she can be touched with her fingers

, and when she is touched,

"All of us, sooner or later, are going to end up developing some type of disability, and this series confronts us with that which is so unknown, so taboo. And it is difficult for us to see it, to look in that mirror when it questions us, as if a truck passed us above".

Natalia de Molina, one of the four leading actresses

, speaks after shedding all her skins to give life to Marga: "As an interpreter I have left my comfort zone, I have reached places that I did not know I could reach, I have known things I didn't know existed. To prepare myself, I was inspired by Alma, a girl with an intellectual disability at the same level as Marga. She was my mirror to do all the physical and vocal work, the absences and silences...

It has been a tightrope walker interpretation

in which I have made a constant balance so as not to fall, because if I fell, there was no net.

I, Natalia de Molina, have had to disappear.

the hardest thing as an actress I've ever done

Frame from the series.

that she defines as "feminist".

QUESTION: At many times, in many scenes, Fácil slaps us with an open hand, without warning.

Is the average Spaniard prepared to face a series like this?

Do we feel like being put in front of four disabled women or do we live more fluffy in ignorance?

As a viewer, what stings me the most is that normative people take refuge in the privilege that a system that looks away offers us.

We ask people with disabilities to adapt to us when it should be the other way around.

Even knowing that I am part of a privileged plot, and that annoys me, I have that situation very normalized.

We are going to enter 2023 and although there is a conservatism on the rise, there is a very open young generation.

, the public should not be treated as if they were a small child

He is ready to change his look.

And if he isn't, maybe the time has come.

has been her first foray in front of the cameras

Until now she had always worked as a screenwriter, and since she was in high school she wrote the work

The road to normalization

, in all his projects he has tried to leave his mark in this regard.

a spastic diplegia that causes less balance and motor difficulties.

Perhaps for this reason, playing a young woman who also lives with a disability has been a greater challenge for her than for her colleagues.

she has come face to face with some emotional conflict

So we ask him.

"Not at all," Marchessi replies.

"All lives are easy and difficult, and we all go through screwed-up times. Me, you, anyone. Maybe the life of a housewife who falls into neglect, ignored by her husband, is terrible."

And it is there where Marchessi

launches the speech that he has been battling forever

"I would love to continue working as an actress, because the adrenaline rush that the camera gives you or getting on the tables in a theater is a drug that you can't get rid of. But actors with disabilities, today, we only feel they offer characters with some functional diversity.

Hopefully one day they call me to play a lawyer to dry, not a lawyer with a disability

Coria Castillo closes the cast of the series

She struggled in the trench of monologues, she is the first time in a fiction of this magnitude.

And when she fantasizes about her future and hovers over the role of women in current fiction,

she also has a lot to say about clichés

: "I am an actress and I want to work, but it is true that because of my physique I encounter many difficulties, I am very limited to that they pigeonhole me in the typical fat person".

QUESTION: Does that happen to you often?

But it also happens to a thin actress with wiry arms who will only be offered a role as a dancer, and to an actor with certain characteristics only that of a drug dealer, and to another that of a prostitute or that of a Latina maid.

And in the years we are in, we have to put an end to that

It seems that the fat lady can only play the funny friend of the protagonist, and her role is that of having an eating disorder.

The gay man has to justify her sexual orientation and that will be his role, the axis that will justify his character.

, but we are going to broaden our sights a bit...

I was born a princess because there were so many bitches

is one of the monologues with which Coria became known before shooting this series.

She has set foot in the smallest theaters and bars, and now she is starring in a great audiovisual production like

The heads and tails of

"When I got to the set I was overwhelmed, with everyone watching me," she recalls.

"It was difficult for me, even, to bring me a coffee. But I come from a world that continues to exude machismo, where it is not easy to manage being a girl. They keep telling you that 'here we do not program women, because one came two years ago, she did a monologue and they didn't like it." It's as if they said that they don't hire those from Cáceres because once one did not connect with the public. They put us all in the same bag and they already assume that women do not work, we are not funny.

If that's not machismo

And Marchessi takes the glove,

returns to the series and goes a step further

Marchessi does not want to make

And when asked if there will be certain sectors that may feel uncomfortable, Marchessi is clear:

could be considered even more conservative than

, where we approach sex from a very daring point of view.

Female sexuality has historically been silenced because the only pleasure that has counted has been that of the man.

And what about us?

And, surprise, women with disabilities too.

That had to be told, and there will be people who don't like it at all."

QUESTION: Don't we run the risk of whitewashing the matter?

Of falling into false inclusion?

One year the blacks play, another the gays, now this...

You have to tell reality as it is, with all its lights and all its shadows.

But it is true that there is something like getting on the bandwagon, for better and for worse.

As if disability were in fashion

As soon as a character with functional diversity appears, they are given a prize.

We already had a Forrest Gump, and

maybe we should put things in perspective

Now that the series is starting on Movistar, the four actresses will be leaving their characters behind.

The stigma, the fragility, the innocence.

The precipice of freedom, the invisible wall that separates them from society, from the system, from a normal life.

The very thin thread of sanity.

QUESTION: And while we're at it, how are we doing with mental health?

I'm 42 years old and I've been having anxiety attacks since I was 15.

So I thought I was going to die

But I have gone to therapy a lot, I have learned to live with it and understand that it is not a bad thing.

I'm terrible... You catch me right now going to the psychologist.

QUESTION: But I just read somewhere that you were in a very good moment.

That you felt privileged, that you had a gorgeous girlfriend and some really cool dogs, that you lived in a beautiful apartment... What happened?

see... I'm very grateful for everything I have.

I have achieved very good things.

But if you ask me,

I suppose it has to do with life cycles, with getting older, with insecurities, with fears... With issues that you think you have controlled and suddenly one day you 'click'... and you have to go back to work on it.

QUESTION: And the cold, which is very bad.

Yes, it will be the change of season.