The "university relic" of a professor: 11 BIC pens with the entire Procedural Law syllabus recorded

The criminal procedural law engraved by hand in a dozen BIC pens: this is the original and elaborated 'chop' that a professor at the University of Malaga (UMA)... 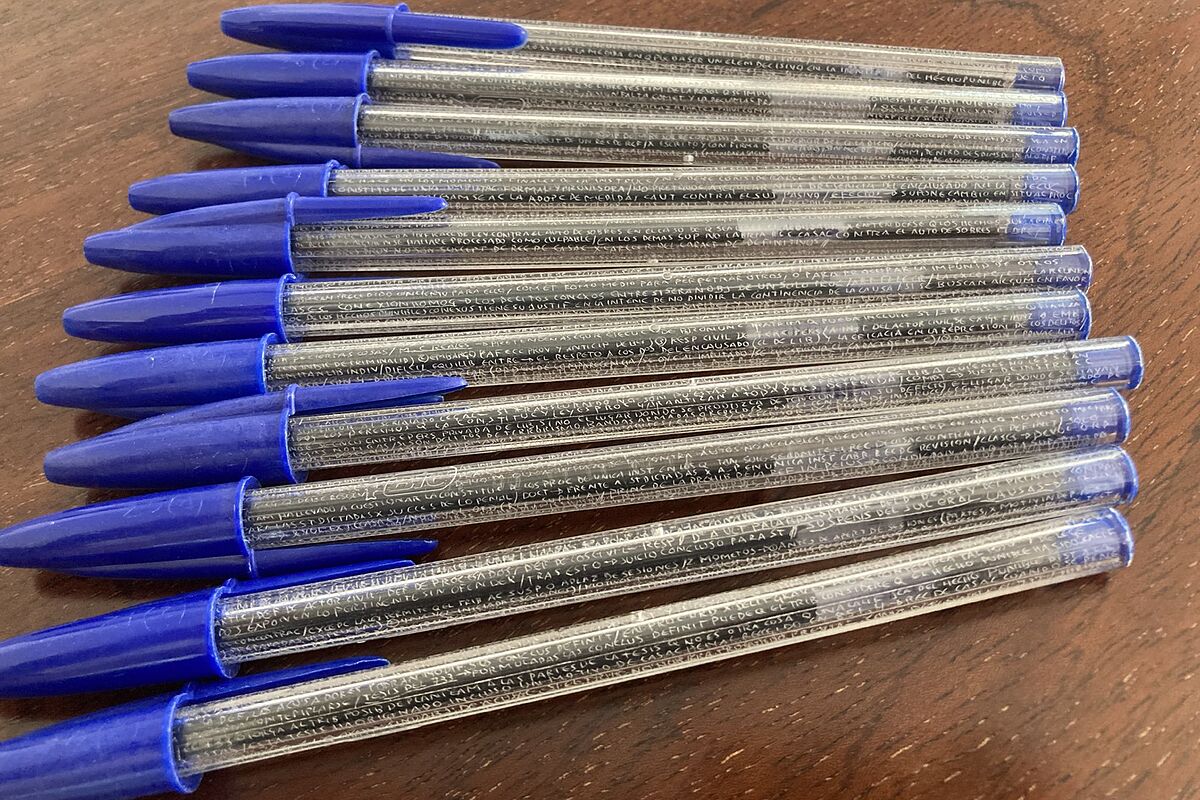 engraved by hand in a dozen

: this is the original and elaborate 'chop' that a professor at the

) has found in a drawer in her office and that has gone viral on Twitter after hang the teacher a photograph of this "university relic".

that while tidying up her office she found a 'chop' that was confiscated from a student a few years ago.

", the teacher has written on the social network, where she has also posted a photo of the peculiar finding.

Eleven BIC brand pens appear in it, with their distinctive blue cap and transparent body, with a detailed summary of the material engraved by hand on the plastic with a sharp object.

The publication has received

, including that of a young man who claims to know the author of the precious 'chop': a "close friend" who finished his law degree and works as a lawyer.

"Hello Yolanda. I know the author of that wonderful work perfectly. In fact, he has authorized me, ignoring his name, logically, to show you some more that he still keeps at home," wrote this tweeter, who has published another photo on which is seen a fortnight more ballpoint pens converted into sophisticated 'chops' with the same 'modus operandi'.

"The technique used by the artist, as he himself tells me, was to replace the graphite lead of a mechanical pencil with a needle, which made it super easy for him to write in the pen," explains the young man, who identifies himself as Gonzo on the social network and that clarifies that this 'chop' is from about a decade ago.

The friend has given even more details of the process of making the 'chops': "

The beginning of each issue/folio, I identified it starting where it says BIC

. And if you look closely, the end of the pen is painted black (the ink never goes all the way in a pen) to make it look better against the black."

The degree of sophistication of the 'chops' has left tweeters fascinated, some of whom have wondered if Gonzo is not the very author of these "relics"... "Hopefully! That wonderful work is beyond my reach ", I have answered.

The network has also been filled with funny comments about the arduous copying work of the former UMA student and many tweeters have agreed that "that entails more work than studying...".

The teacher who has made the nice discovery has been surprised by the repercussion that her publication has had and has thanked all the comments: "I have laughed a lot with them and thanks, above all, to the artist!!" written.