The Nobel Prize in 2022 was awarded to specialists in click chemistry, a technique that allows organic reactions to be carried out quickly and without by-products. The winners were the Americans Caroline Bertozzi and Barry Sharpless and the Dane Morten Meldal. Sharpless and Meldal independently described click chemistry reactions in the early 2000s. Bertozzi was able to apply these developments in biotechnology. According to experts, click chemistry has become a big breakthrough for pharmaceuticals, as it allows you to carry out the desired reactions directly in living cells without side effects. 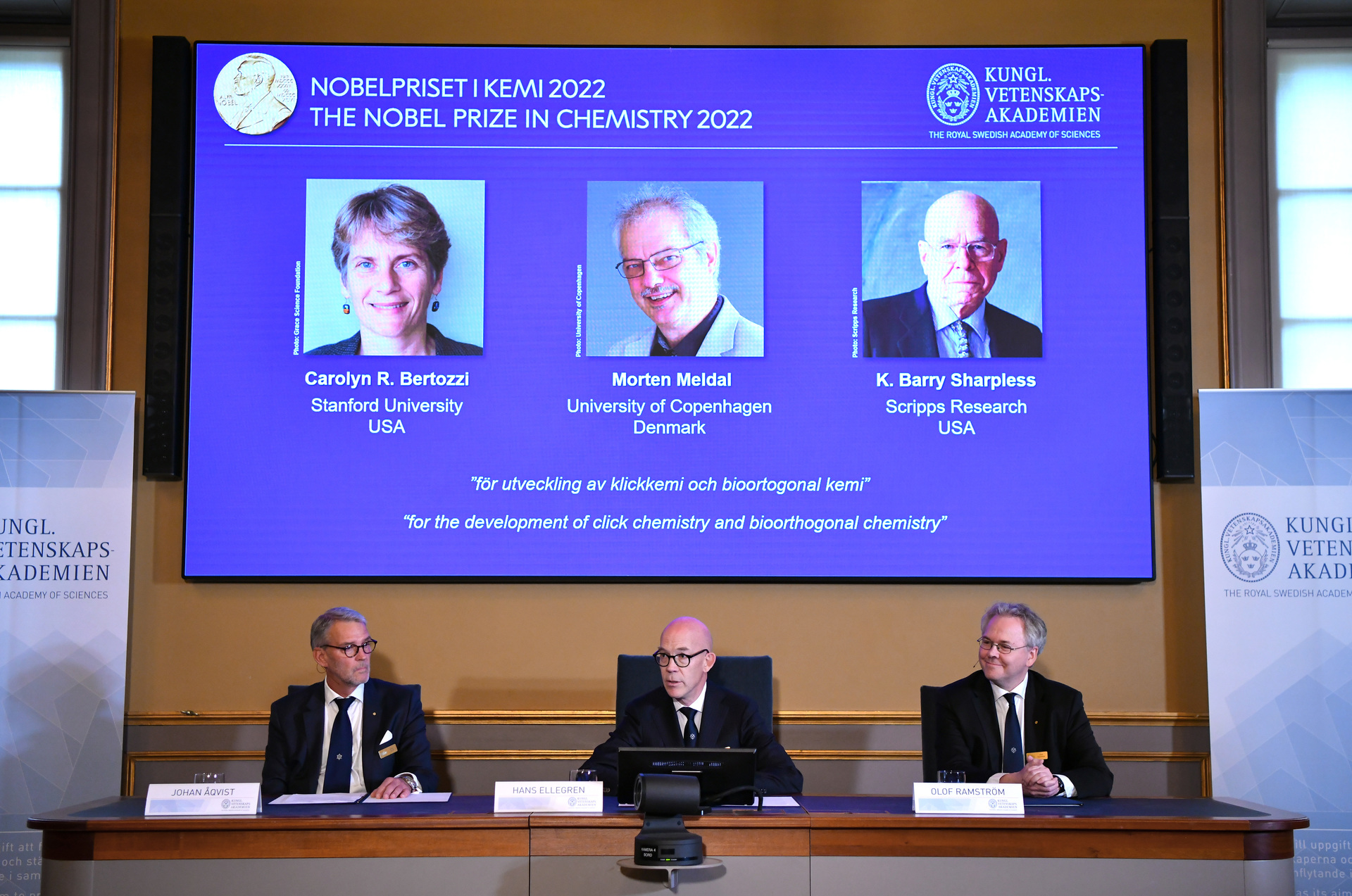 The Nobel Committee of the Royal Academy of Sciences has announced the names of the 2022 Nobel Prize winners in chemistry.

They were the Americans Caroline Bertozzi and Barry Sharpless, as well as the Dane Morten Meldal.

Scientists were awarded "for their contribution to the development of click chemistry and bioorthogonal chemistry."

“The 2022 Nobel Prize in Chemistry is awarded for simplifying complex processes.

Barry Sharpless and Morten Meldal laid the foundation for a functional branch of chemistry called click chemistry, which is characterized by fast and efficient joining of molecular building blocks.

Caroline Bertozzi took click chemistry to a new level by using it in living organisms,” the committee explained.

"The concept of a simple and efficient chemical reaction"

As noted in the report, although the synthesis of complex molecular structures allows the creation of new drugs, it takes time and significant costs, since part of the reagents is lost in the form of by-products.

Around 2000, Sharpless came up with the concept of click chemistry, which allows fusion reactions to be carried out quickly and without loss, the Nobel Committee explained.

Among many other applications, this reaction is used in the synthesis of pharmaceuticals for DNA mapping and the creation of more suitable materials for the intended purpose, ”the committee said in a statement.

In turn, Caroline Bertozzi developed click reactions that can occur inside living organisms to map important but "elusive" biomolecules on the surface of cells (glycans).

“The bioorthogonal reactions introduced by her (reactions that can take place inside living cells without knocking down natural biochemical processes.

) proceed without disturbing the normal chemical composition of the cell,” the committee added.

Now such reactions are used in medicine, in particular in the development of anticancer drugs.

Click chemistry has emerged as a solution to a number of complexities in industrial synthesis, especially in pharmaceuticals.

The fact is that in order to obtain the desired chemical compound, the initial reagent often has to be carried out through a number of reactions and procedures, in each of which part of the substance is lost in the form of by-products.

This increases the cost of the final product and complicates the manufacturing process.

As Sergey Vatsadze, Doctor of Chemistry, Professor of the Russian Academy of Sciences, noted in a RT commentary, the prize winners managed to come up with very convenient methods that allow completely different molecules to be combined.

“For example, small simple molecules can be combined into one or attached to some kind of biopolymer.

This method allows you to work in cell culture or even in the cells of real organisms.

It also has another important advantage: in this case, from the two molecules involved in the reaction, just a third molecule is obtained, without by-products.

This is an addition reaction: how many atoms are involved, so many remain in the final product.

It is very convenient,” the expert explained.

The principle of click chemistry can be compared with a constructor: first, small fragments are assembled from small simple molecules, and then a molecule of the final substance is formed from them by carrying out simple reactions, as a result of which all elements are combined together.

Mendeleev, Alexander Mazhuga, in a conversation with RT, noted that this year the Nobel Prize in Chemistry is given for the development of a new fundamental approach to the transformation of compounds, which is widely used in practice.

“This year the Nobel Prize in Chemistry was given for a new class of chemical reactions.

First of all, this concerns organic chemistry, the click reaction is a literal translation, but in fact, it is a method that makes it easy to obtain complex molecules without creating special conditions and using complex catalysts,” the professor added.

Recall that Barry Sharpless has already won the Nobel Prize in Chemistry in 2001 together with his American colleague William Knowles and the Japanese Ryoji Noiori.

Then a group of researchers received an award for the discovery of catalysts for the production of so-called mirror molecules, which are widely used in pharmaceuticals.

It is known that many molecules have two forms - left and right, this property is called chirality.

Such molecules can manifest themselves in different ways in biochemical processes, so the discovery of a way to set the chirality of molecules during synthesis has played an important role for pharmaceuticals.

The scientist was again talked about in the media on the eve of the Nobel Prize in Chemistry in 2013.

Then the Thomson Reuters agency, which owns the Web of Science indexing portal for scientific publications, predicted that Sharpless had a chance to become a Nobel laureate together with his American colleague M.J.

Finn and a native of Russia Valery Fokin - these scientists were then called the creators of click chemistry.

Nine years later, click chemistry did indeed win the Nobel Prize, but Finn and Fokine were not among the winners.

According to Alexander Mazhuga, there are no clear criteria by which the founding fathers of a particular scientific direction are determined in the scientific community.

Sometimes similar scientific studies are carried out in parallel by different scientific teams, as was the case with the groups of Shapless and Meldal.

Morten Meldal is said to have independently reached the same conclusions as American chemists.

“Several years ago, there were even predictions in the scientific community that Meldal, Sharpless and Fokine would eventually receive the Nobel Prize, but then this did not happen.

As for Caroline Bertozzi, she showed for the first time that this reaction can be used to modify and study a variety of biomolecules, this is also a very big discovery.

In the history of the Nobel Prize in Chemistry, there were no cases when more than three scientists were awarded it at the same time.

Therefore, I don’t think that Valery Fokin was not included in the group of laureates for some kind of malicious intent, ”summed up the expert.