The year 2022 already has its best tortilla. Well, a couple, because two have been the winners of the XV Spanish Potato Tortilla Championship, held yesterday at the Alicante fair... 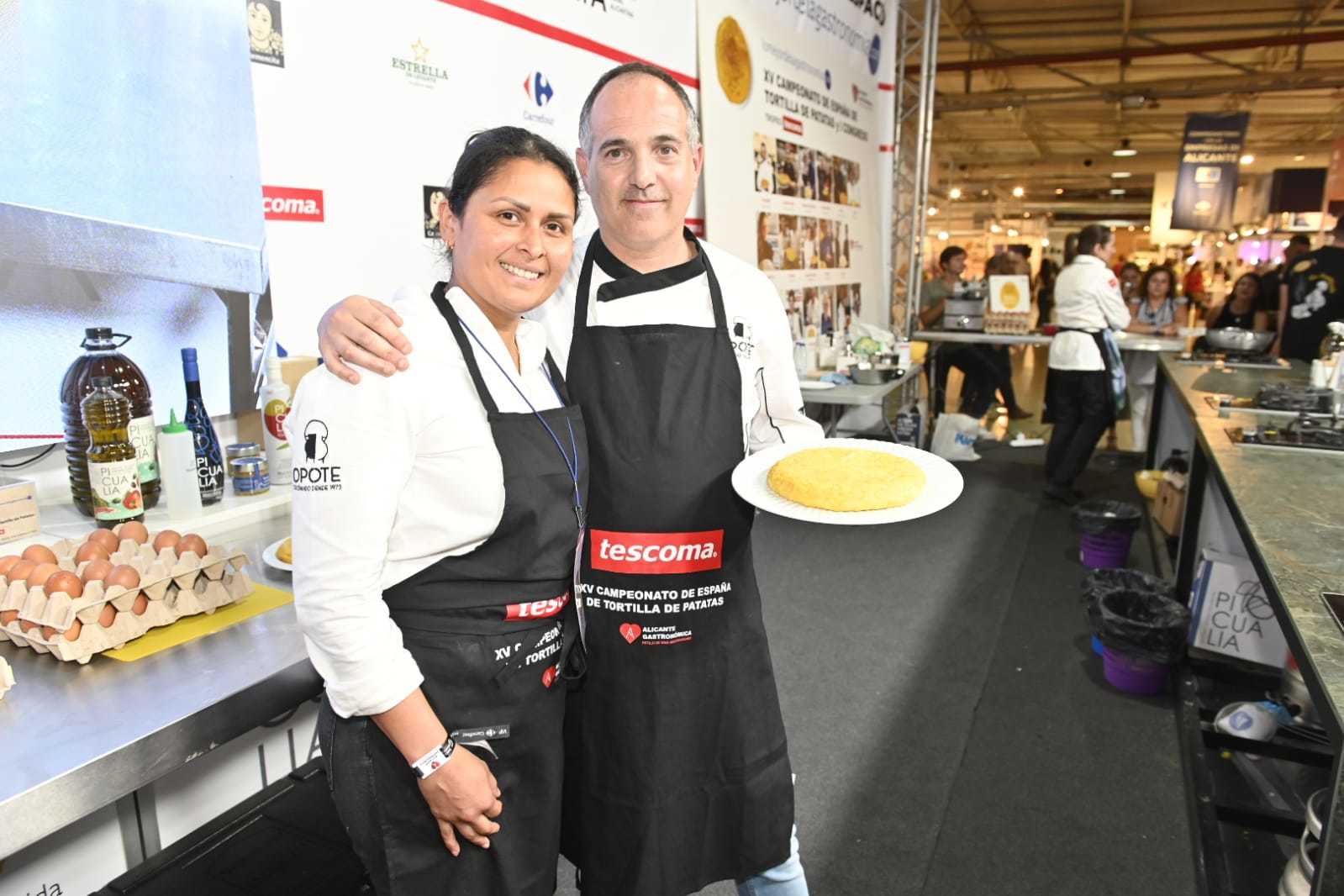 The year 2022 already has its best tortilla.

Well, a couple, because two have been the winners of the

, held yesterday at the

The Tizona Restaurant (Logroño) and the Mesón O Pote (Betanzos, A Coruña) have won this award jointly in an edition in which the jury had it especially difficult "due to the spectacular level presented by the 11 candidates", its members noted.

The best omelette this year has come from the hands of

from Coruña Mesón O Pote, according to the jury headed by Rafael García Santos (gastronomic critic and creator of the contest) and formed by

(three Michelin stars), among others.

With the award already on its way to their respective homes, both winners tell us the keys to their award-winning tortillas:

one with onion and the other without, a true reflection of national taste

and an iconic dish of the country's cuisine.

have two small restaurants in Betanzos (Mesón O Pote, opened in 2006, and A Raxeria do Pote, in 2015), one opposite the other, and in both

their typical omelette triumphs, in the style

-couldn't be another way- from Betanzos, from which

they sell between 100 and 120 tortillas every day

With this recipe, and with all the necessary ingredients and utensils

that they have taken to Alicante, they have won the day.

And how do you make the Mesón O Pote omelette? You may wonder: "With golden potatoes, a yellowish egg on the outside,

creamy and juicy on the inside, and without onion

, although if a customer asks for it, I can make it with it." Albert explains.

"It doesn't have much history, except for

good products from the area:

The key is in the proportion,

And in the technique, of course, because Alberto has been perfecting the elaboration over time.

"The potato is very loose,

with fine cuts, not in little cubes

. I cold it, I leave it golden brown, I put it in the egg, I sprinkle salt on it, I mix it in the pan

. I go back and forth and it's over

," details this cook who was a waiter until the kitchen caught him "forever" at the age of 35.

"I have had good teachers, especially my wife and my mother."

In their two dining rooms they serve the tortilla in

we don't like to make them to take away because

Although experience is a degree (Alberto

already won the championship in the 2011 edition

), he did not expect to win the prize.

"I know that my omelette likes, but there were other very good ones and anyone could win."

From his dining room in Logroño ("well, the one who has the restaurant is my wife, I'm just the kitchen assistant and the one in charge of the tortillas," he says with humor and humility) 27 tortillas come out every day.

The co-winner of this XV edition is made "with a lot of love, a lot of dedication and a lot of passion. And on the tangible subject, with a very good product:

(kennebec from Xinzo de Limia), extraordinary Galician eggs and onion... And then, a little technical", details.

Although more than "a little" it is a "much" or, at least, "a very special one".

Because Carlos has worked his hard to achieve the ideal formulation of it.

And it is that he is quite

a theoretical and practical student of the tortilla

Six years ago, his wife, Ana Rosa Lasheras, taught him what she used to make, "which is spectacular, but I have learned more and more until I got mine, which is unique.

I am sick of tortillas,

I never get tired of try them all over Spain, and my recipe has nuances of many great tortillas, but it is unique.

We continue with the particular recipe that this man from Rioja has presented to the contest, where he took

everything twice to avoid scares

"Pans, precision scales, slotted spoons, potatoes, eggs in an isothermal drawer... I've taken care of everything as if they were my children," he says with a laugh.

Poach the onion for three and a half hours and

reserve it to rest. Poach the potato in Arbequina oil for 50 minutes; when it cools down, store it in the refrigerator with some of the oil, and to

and achieve a conjugation that enhances the taste of potato.

And he continues: "The next day, to make the omelette, we put the potato in the pan with very little oil, since the rest is provided by her, over a very high heat because

what I'm looking for is a kind of

, which the potatoes grab between them and give them a

touch . I take them out, add them to the egg, which I don't beat, where I have previously added the onion and salt. And then to the pan."

"Tasty, creamy and balanced, note the potato, onion, yolk, but everything in its proper measure."

This is how Carlos describes this omelette of

which he only makes one size

Of course, after the award, "we will surely have to change our strategy to be able to adapt to the demand that we are going to have, according to what winners of other editions have told us. Make them smaller... We'll see," he advances while affirming that although his tortilla is famous, "

the heart of the restaurant is Ana Rosa

, all the clientele we have is for her cooking".

The 11 finalists of the contest held at the Alicante Gastronomic fair.

Carlos and Alberto have competed with nine other restaurateurs