"Preservation of the country and the political system": how Alexander Benckendorff defended Russia on the battlefield and in a secret war

Alexander Benckendorff, an outstanding military and statesman of the Russian Empire, was born 240 years ago. He is known as the chief of the gendarmes and the head of the III department of His Imperial Majesty's Own Chancellery, which experts call the first professional intelligence service in the history of Russia. In addition, Benckendorff was a combat officer who distinguished himself in the Patriotic War of 1812, the foreign campaign of the Russian army and other military conflicts. According to historians, in the twentieth century, the image of Benckendorff was largely distorted and reduced to the persecution of dissidents, but in fact he did a lot for the good of Russia. In particular, the III branch under the leadership of Benckendorff actively fought against corruption and foreign espionage. 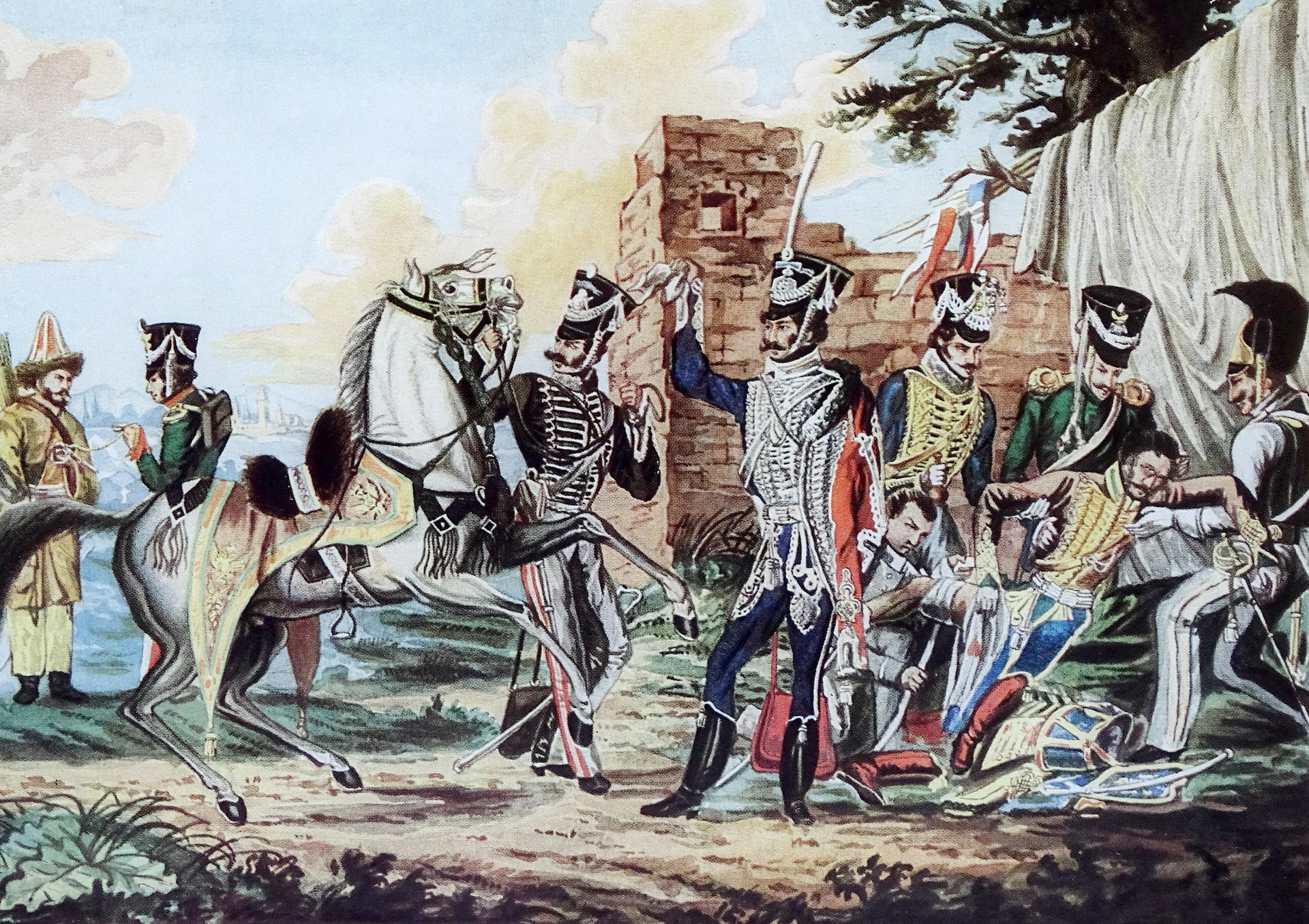 On July 4, 1782 (some sources indicate 1781 and 1783), the Russian statesman and military leader Alexander Benkendorf was born.

As a brave officer, he distinguished himself during the Patriotic War of 1812, the foreign campaign of the Russian army and a number of other military conflicts in the first half of the 19th century.

Shortly after the Decembrist uprising, Emperor Nicholas I appointed Benckendorff chief of the gendarmes and head of the III department of His Imperial Majesty's Own chancellery.

According to historians, the department under the leadership of Benckendorff was engaged in political investigation, counterintelligence and the fight against corruption.

His father Christopher was a close friend of Catherine II's son Paul I, the future emperor.

Alexander was brought up in a prestigious educational institution - the Jesuit boarding school of Abbé Nicolas in St. Petersburg.

In 1798, he was accepted into the service of the Life Guards Semyonovsky Regiment, promoted to ensign and appointed adjutant wing of Emperor Paul I.

In 1802, Alexander Benckendorff was included in the expedition of Georg Magnus Sprengtporten, which was supposed to secretly conduct military-strategic research on the territory of Russia and some of the countries adjacent to it.

Benckendorff visited Siberia and Central Asia, the Far East and the Caucasus, and also carried out separate assignments in Yakutsk.

Subsequently, the expedition through the Crimea and Constantinople went to the island of Corfu.

During his stay in the Caucasus, Benkendorf participated in the hostilities against the Ganja Khanate, and while on the island of Corfu, in the formation of troops from among local residents to fight the French.

In 1806-1807, Benckendorff participated in the Russian-Prussian-French war and, according to historians, distinguished himself in several battles.

After the conclusion of the Tilsit peace between Russia and France, he served for some time at the Russian embassy in Paris, and then volunteered for the Danube army to participate in the Russian-Turkish war of 1806-1812.

Benckendorff was often in the vanguard or in command of separate detachments.

For courage shown in the battle of Ruschuk, he was awarded the Order of St. George, 4th degree.

During the Patriotic War of 1812, Benckendorff commanded the rearguard of Ferdinand Winzingerode, the head of the Observation Corps and the army partisan detachment in the Smolensk region, and proved himself in the battle of Velizh.

When the French left Moscow in the autumn of 1812, Benckendorff was appointed its first commandant.

Later, he participated in the pursuit of the enemy army to the western borders of Russia.

The units under his command captured more than 6 thousand French soldiers, including three generals.

During the foreign campaign of the Russian army in 1813, Benkendorf was appointed commander of a separate flying detachment.

He defeated the French in the battle near the city of Tempelberg and participated in the Battle of Leipzig.

Under the command of Benfendorf, the Cossacks took part in the liberation of Belgium and Holland from the Napoleonic troops.

Later, Benckendorff was appointed commander of the Lancers Brigade and Dragoon Division, and in 1819, Chief of Staff of the Guards Corps.

In 1821, Benckendorff prepared a note for Alexander I on secret societies in Russia, listing the members of the organizations of the future Decembrists and suggesting methods to counter them.

But, according to some historians, the emperor did not take Benckendorff's information seriously enough and sent him to command the 1st Cuirassier Division.

Three years later, he distinguished himself during the flood of 1824 in St. Petersburg: Benckendorff swam to one of the boats on the streets of the city and personally saved people all day.

During the liquidation of the consequences of the natural disaster, Benkendorf was appointed military governor of Vasilyevsky Island.

“Benkendorf was not a man who climbs the career ladder, sitting in quiet places and intriguing.

He earned his ranks and awards thanks to courage, courage and loyalty to the oath, ”emphasized MPGU professor Vitaly Zakharov in a conversation with RT.

At the head of the secret service

During the suppression of the uprising on Senate Square on December 26, 1825, Benkendorf commanded troops on Vasilyevsky Island, and then became a member of the Commission of Inquiry on the case of the Decembrists.

At the beginning of 1826, Benckendorff submitted to Emperor Nicholas I a draft “On the Structure of the Higher Police”, in which he proposed the creation of a system of secret political investigation in Russia to suppress threats to state security.

According to Vitaly Zakharov, the emperor trusted Benckendorff and took his proposals very seriously.

Soon, Benckendorff headed the created III department of His Imperial Majesty's Own Chancellery and became the chief of the gendarmes.

It also summarized information about emergencies and engaged in censorship.

In parallel with the secret service, Benckendorff led the Imperial Main Apartment (an institution within the Military Department of the Russian Empire to carry out the personal instructions of the emperor or special assignments).

According to historians, Benckendorff effectively counteracted the emergence of revolutionary manifestations in Russia, stopped subversive activities on the part of foreign states and actively fought corruption.

“The activities of Benckendorff were largely negatively mythologized in the 20th century.

Objectively, his work was aimed at preserving the country and the political system.

Similar activities are carried out in any state.

Perhaps, if it weren’t for Benckendorff’s undertakings, then Russia, at one of the difficult moments in its history, would simply fall apart and become the prey of other powers, ”said Mikhail Myagkov, scientific director of the military historical society, in an interview with RT.

One of the priority tasks of state power in the first half of the 19th century, Benckendorff considered the solution of the peasant question.

He was an active supporter of the abolition of serfdom.

In addition, Benckendorff repeatedly petitioned Nicholas I to commute the sentences of the Decembrists.

Benckendorff accompanied the emperor during the Russian-Turkish war of 1828-1829 and personally participated in several battles.

In 1831 he was included in the State Council and the Cabinet of Ministers.

Benckendorff supported the development of railway transport in Russia - in particular, the construction of the St. Petersburg - Moscow railway.

“Under Benckendorff, there was a tough government in Russia, but there was no terror.

Internal stability in the country was largely preserved thanks to him personally.

By himself, Benckendorff was a real knight without fear or reproach.

The main values ​​​​for him were honor and service to the Fatherland, ”Myagkov emphasized.

On the way back, on September 23, 1844, he died on board the Hercules steamer near Dago Island in the Baltic Sea and was buried on his estate near Reval (today Tallinn).

According to the professor of Moscow State University.

Lomonosov, Doctor of Historical Sciences Dmitry Volodikhin, the role that Benckendorff played in the history of Russia was undoubtedly positive.

“On the battlefield, Benckendorff repeatedly looked into the eyes of death, but did not retreat.

He was a man of great courage.

In the performance of police functions, Benckendorff demonstrated exceptional decency and honesty.

The rigidity that he showed to maintain order in the empire was always moderate.

It remains only to wish that there are as many such managers in the history of our country as possible, ”summed up Volodikhin.