From the screens to the streets: Netflix tours of Madrid to discover the ins and outs of its filming

Do you want to live a robbery in the Plaza de Callao like the one in La casa de papel, discover the favorite bar of the protagonist of Valeria or know in detail how the filming was... 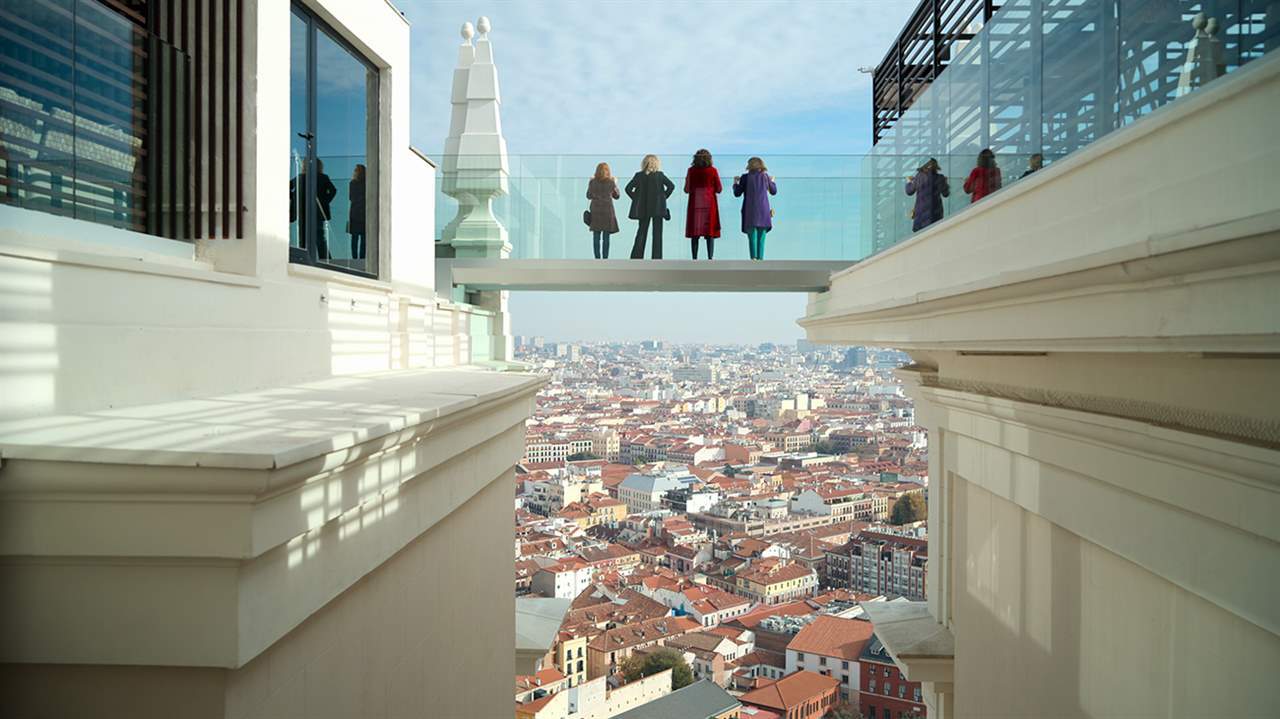 , discover the favorite bar of the protagonist of

know in detail how the filming of

were at the Hotel RIU?

Madrid, from July 11 to 17, which will force its followers to put down the remote control, for at least two hours, to immerse themselves in this guided tour through the eyes of their favorite characters .

To offer these tours, not only in Madrid, but also in London and Paris, the platform will collaborate with the new SANDEMANs European tours.

Join your guide at

learning about the history of cinema: travel from its beginnings in black and white to the introduction of sound and color.

Hear what it was like to live in Madrid at the turn of the century and how the big screen took the city by storm.

Look towards the roof of the

, where some of the most iconic scenes of

Valeria have been shot.

In fact, one of the most representative scenes of this latest series is the one that takes place when they stand in front of the Madrid

, on the transparent walkway, and let off steam.

Scene from 'Valeria' at the Hotel RIU.NETFLIX

But what many are surely unaware of is that one of the main actresses in the cast suffers from vertigo, which is why it was very difficult for her to shoot this moment.

However, she was so brave and professional that it is very difficult to discover who she is.

Discover the splendor of Gran Vía

, admiring its many theaters and cinemas, and head towards

: a must-see for any fan of

Hear stories about this popular series and imagine The Professor on the movie marquee.

Some of the fun facts you'll learn: Denver's laugh, a hallmark of the character, is heard up to 55 times over the five seasons.

The Professor appears on the marquee of the Callao.NETFLIX cinema.

Also, see all the details of the iconic square where the cast of this great Netflix title -which has been watched more than 6.7 billion hours- made it rain money, literally.

Where did so many bills come from?

The team used the presses of the ABC

to carry out the mass printing;

and yes, they were printed on newsprint.

For security reasons, they were unable to use the actual machinery of the Mint.

Also, learn about the evolution of the film industry: from small screenings to the big premieres that took over Madrid's most famous street during the glamorous 1950s. Find out how the capital began to embrace film culture and became a destination popular for world-renowned celebrities, including legendary entertainers like Ava Gardner.

Continue the tour to the emblematic

located on Gran Vía, the perfect stop to talk about

It is estimated that its protagonists, on average, had more than 100 costume changes.

As if that were not enough, there will also be time to reflect on the role of women in films during and after the 1920s.

Learn about the Movida Madrileña

You will walk to the

, to discover important figures of the Spanish film industry and about the Madrid scene.

There will be time to understand how movies and TV shows became an integral part of social change in Spain.

Find one of the most important figures in Spain:

This stop will show how the portrait that the film director showed of Madrid and Spain became, not only an artistic revolution in the heart of the Movida Madrileña, but also an instrument for LGBTIQ+ stories to reach the general public.

The tour ends at the

, in the heart of Chueca, to discover

, the favorite restaurant of the protagonist of Valeria.

Immerse yourself in the atmosphere, she learns about the Madrid lifestyle and discovers how today's movies and series continue to shape society.

- Guided tours in Madrid will be conducted in English and Spanish.

- Enter here if you want to reserve your place.