Between vineyards and on the banks of the Duero River, a unique experience is lived, that of becoming a contemporary apostle in an environment with nine centuries behind him. He is he ... 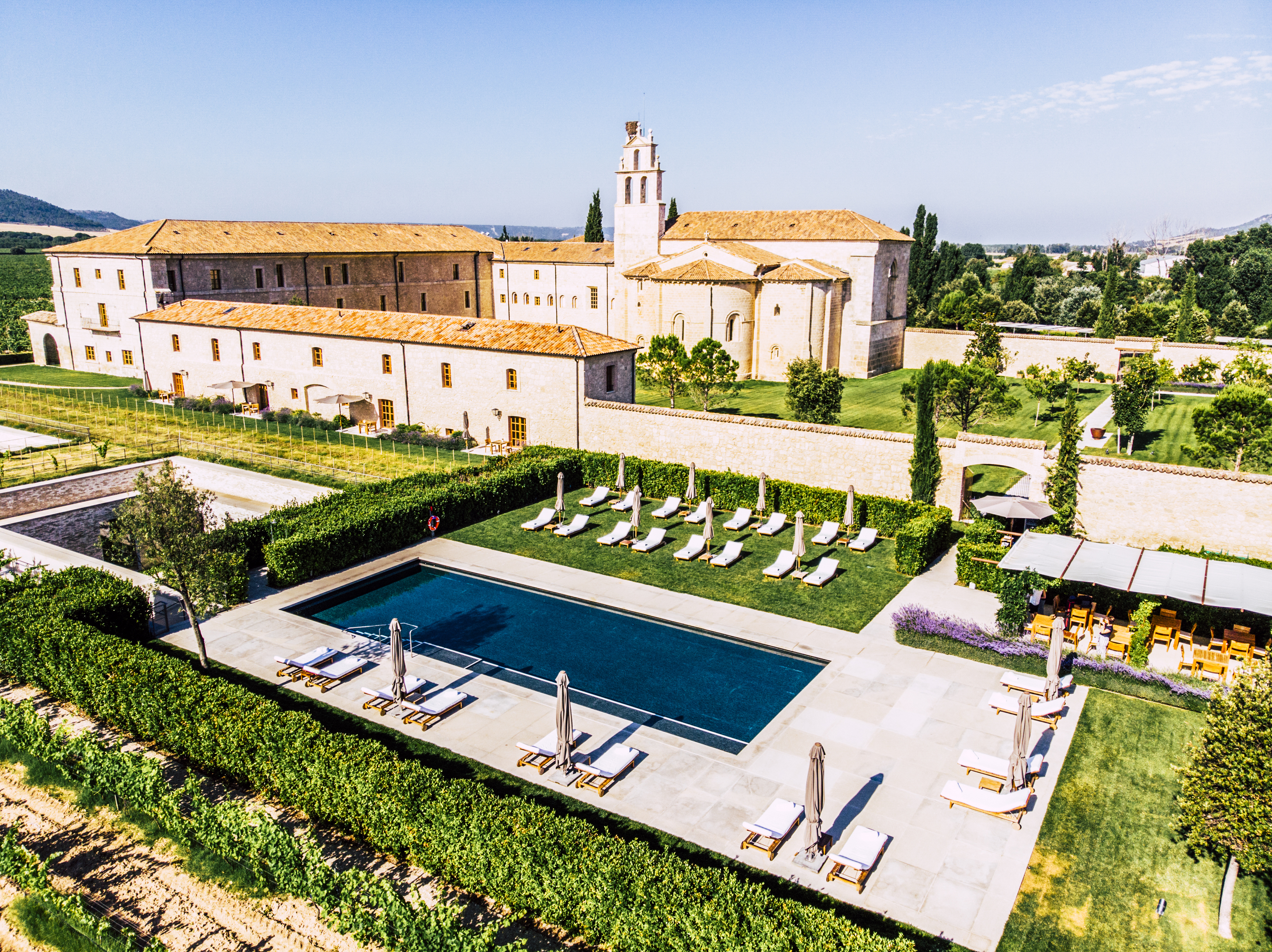 Between vineyards and on the banks of the Duero River, a unique experience is lived, that of becoming a contemporary apostle in an environment with nine centuries behind him.

This is the goal of

, a 12th-century Romanesque convent converted into a

where time stands still... or, at least, passes at a different pace.

, but almost, because there is

nothing to disturb the peace

that is breathed between its walls.

Not even the kestrels and the goldfinches that fly over the bell tower, where a couple of storks nest, are noisy.

They are part of

such a beautiful scene

But they are not, because everything that surrounds this bucolic space two hours from Madrid and located in the middle of the

"We are not a hotel, we are a destination

It is this Sevillian with extensive experience in the world of wine and wineries who leads a team of one hundred people (50 more in the cellar) in charge of making sure that everything runs like clockwork without the guest noticing, because

the service is almost invisible.

"We have an exceptional human team and a ratio of three employees per room, something that is not common in luxury hotels, where the average is less than one", explains Valero.

Most of the employees, moreover, are residents of

, the town where the winery and its

are located , and the old abbey, restored with great care and respect for its history.

Both make up a unit.

"This is not a winery plus a hotel," clarifies the director, who has been clear about this concept of unity since he took the reins of the winery, 13 years ago, after passing through Marqués de Griñón, González Byass and Diageo among other companies.

Aerial view of the hotel, with the outdoor pool. CEDIDA

Although the winery and the hotel go hand in hand, they can be separated into independent visits and experiences.

It is not necessary, for example, to be staying to take a tour of the property and its vineyards.

) and the fauna (here

roe deer, genets, wild boars and even some wolves

roam freely ), as well as a

in the cellar cost 80 euros.

The visit can end with lunch at Calicata, the winery's

, with a letter signed by

This year, in addition, they are celebrating because Abadía Retuerta has obtained the

, the highest distinction regulated in the Wine Law.

Nor is it necessary to be a hotel guest to enjoy

, the Michelin-starred restaurant that occupies the former monks' dining room, a space dominated by a

The Catalan chef Marc Segarra came to Refectory in 2016 by the hand of Andoni Luis Aduriz.

At 35 years old, he is one of the essential chefs in Castilla y León who, in addition to maintaining the star obtained in 2014, has obtained a

, a distinction that Michelin grants to those restaurants that are

responsible practices with the environment

The Refectory restaurant, located in the old monks' refectory. CEDIDA

All the ingredients in Segarra's kitchen are from kilometer 0 and come from the vicinity of Abadía Retuerta, such as the

175 kinds of plants and vegetables

cultivates with care in the

old monks' garden that he has managed to recover.

Sustainability, in fact, is one of the axes of Abadía Retuerta.

"It is one of my obsessions - underlines the CEO - both in the hotel and in the vineyards, and I can assure you

that we recover more than we destroy

restoration of the convent

itself is an example of sustainability.

The monastery, founded in 1146 by one of the daughters of Count Pedro Ansúrez, lord of Valladolid, was in a very deteriorated state when its rehabilitation was undertaken in 2008. Previously,

the building had been in the hands of a cereal company

that used it as

barn and accommodation for several families

who worked in the fields and had a

small school and a grocery store

The abbey, before its restoration, when it was dedicated to agricultural tasks.

restored its splendor while maintaining its essence.

The old quarters of the monks are now

with all kinds of details and

views of the lush vineyards

that shine in all their splendor in September.

A bottle of Abadía Retuerta Selección Especial and a crystal bread with cheese spread await the customer as soon as they cross the threshold of the room.

The chef Marc Segarra in the garden of the monks. CEDIDA

, included in the price of the room, is another of the great attractions of Abadía Retuerta.

but with 80% natural light, it occupies more than a thousand square meters that hide a

Here the client is received with a tasting of wines and oils and experiences adapted to their tastes and needs are designed.

In addition, a team of professionals is in charge of the

that can also be requested by reservation.

experience can also include

in a room next to the gym, equipped with the latest technology in equipment.

is another of the jewels that the hotel treasures, surrounded by gardens and

where snacks or cuisine prepared on a vine shoot grill is served.

It could be the busiest area, but not even the dips manage to break the peace and tranquility of the environment.

Enrique Valero made a special effort to make Abadía Retuerta a

and the perfect setting for

From horseback rides or bicycle rides,

over the estate and the area's wineries, country snacks, tastings of historic vintages,

(another of the axes of Abadía Retuerta, which houses a collection from the Renaissance Italian until the 20th century), with

or falconry... everything is possible here.

Stargazing is one of the experiences offered by Abadía Retuerta LeDomaine. CEDIDA

(or Duero Valley), in which, in addition to Abadía Retuerta, two other wineries (

) and three Michelin stars participate: the

"We have created a

, there is no place in the world with three Michelin stars within 30 kilometers, born in addition to winery projects. It is an

at the level of others of international renown.

The three wineries are close and we share the same road, the N 122. The excuse is gastronomy and wine, but add landscape, history, culture, crafts... "explains Valero.

After the pandemic, a time that he recognizes was "very hard, we had 90 people with nothing to do", Abadía Retuerta has recovered the occupation prior to the closure.

60% of their clients are foreigners,

most of them from the

(around 21%), although they also have an important portfolio of Latin American guests, especially

and Brazilians, as well as English and German regulars to

remaining 40% is a national client

, especially from Madrid and the north of Spain.

And many repeat, of course.

From 505 euros room with breakfast.