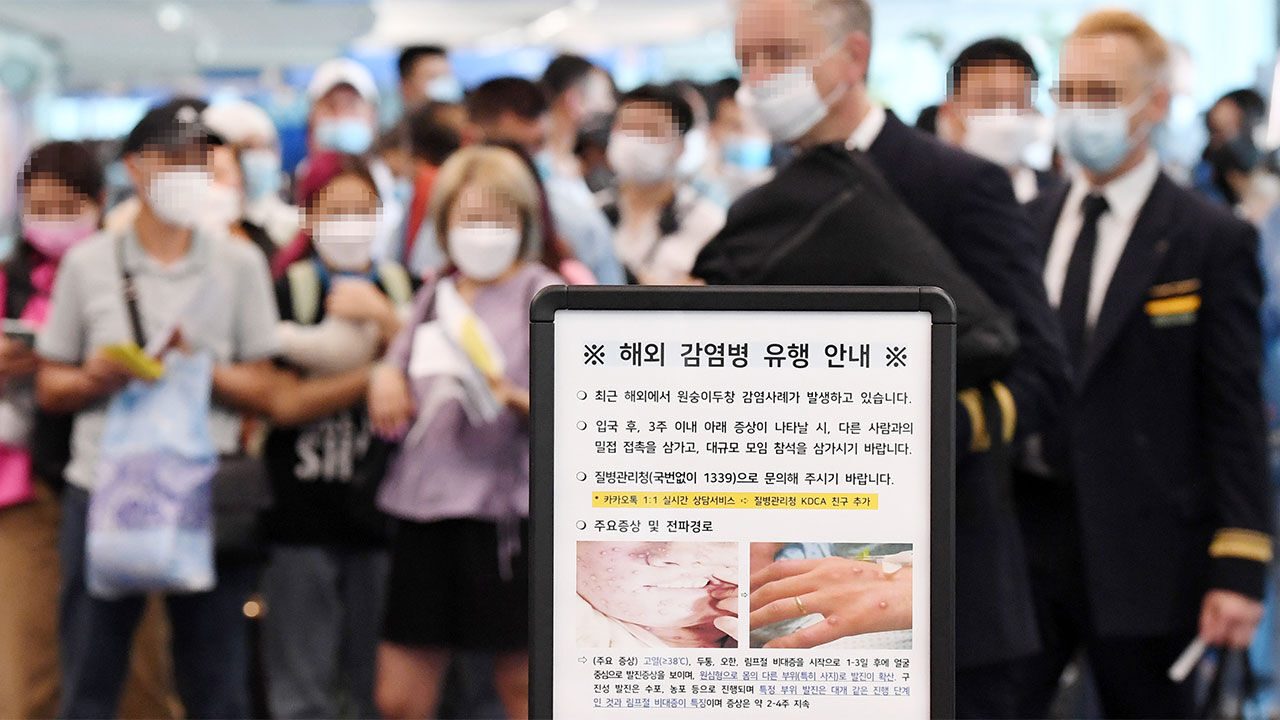 The first confirmed case of monkey pox, an infectious disease that is spreading around the world and raising concerns about a global health crisis, has occurred in Korea.

Quarantine authorities have decided to upgrade the infectious disease crisis level to 'caution' and strengthen quarantine according to the occurrence of confirmed cases.

The Korea Centers for Disease Control and Prevention (KCDC) said in a briefing today (22nd), "The result of a gene amplification (PCR) test and gene sequencing analysis of A, a Korean who returned from Incheon International Airport on the 21st, and showed suspicious symptoms, was confirmed as a confirmed case." .

Person A came to Korea from Germany at 4 PM on the 21st.

After arriving at Incheon International Airport, I reported my suspicion to the Korea Centers for Disease Control and Prevention and was classified as a pseudo-patient (suspect) by the airport quarantine station and the Central Epidemiological Investigator.

After she waited in an airport quarantine facility, she was transferred to the Incheon Medical Center, a nationally designated inpatient treatment bed, where she was treated and tested.

Mr. A had a headache on the 18th before entering the country, and at the time of entry, he showed a mild fever of 37.0 degrees and systemic symptoms such as sore throat, asthenia, fatigue, and skin lesions.

The Korea Centers for Disease Control and Prevention (KCDC) held a crisis assessment meeting on the same day and raised the infectious disease crisis level from 'attention' to 'caution'.

Accordingly, the current countermeasures team (head of the Infectious Disease Crisis Response Bureau) led by the director-level will be upgraded to the Central Quarantine Countermeasures Headquarters (Bangdaebon), headed by the Director of the Korea Centers for Disease Control and Prevention (KCDC), to strengthen the multi-ministerial cooperation system.

In addition, all cities, counties, and districts within the provinces and cities across the country will set up, discuss and operate a regional quarantine countermeasure team to operate an emergency quarantine system.

The quarantine authorities strengthened quarantine for monkey pox on the 24th of last month, issued a crisis alert level of 'attention' on the 31st of the same month, and designated it as a class 2 legal infectious disease on the 7th.

Confirmed patients are required to be hospitalized, quarantined, and treated, and patients and medical institutions are obligated to report.

A confirmed person is quarantined until the loss of infectivity and recovery is confirmed due to the removal of the scab of the skin lesion.

Meanwhile, on the 21st, the same day as Mr. A, foreigner B, who was reported as a suspected patient, was tested negative.

B, who developed symptoms on the 19th, arrived in Korea by flight on the 20th, and visited a hospital in Busan (a nationally designated inpatient treatment bed) on the morning of the 21st and received isolation treatment.

Monkey smallpox is an acute febrile and rash disease caused by viral infection. The symptoms are similar to smallpox, but the severity is reported to be low.

It is a zoonotic infectious disease that can be transmitted through animal-to-human, human-to-human, infected environment → person-to-person contact. Rash symptoms appear 1-3 days after starting with lymphadenopathy, etc.

Respiratory transmission is possible, but air transmission through fine aerosols containing the virus is not common, so it is not as highly contagious as Corona 19.

According to the World Health Organization (WHO), the fatality rate of monkeypox in recent years is 3-6%, which is not negligible.

Monkeypox was originally a virus that became endemic in Africa, but it has spread worldwide after the first case was reported in the UK on the 7th of last month.

According to the World Health Organization (WHO), from January to June 15 (local time) of this year, there were 2,103 confirmed cases of monkey pox in 42 countries, and one case of death was reported in Nigeria.

In Europe, there were a lot of infections, but in Asia, there was a rare case in Korea this time.

In Asia, based on the WHO announcement on the 15th, there were confirmed cases in Morocco (1 case) and the United Arab Emirates (13 cases) in the Middle East, and one case of monkey pox was confirmed in Singapore that day.

The WHO held an emergency meeting on the 23rd to review the declaration of monkeypox as an international public health emergency (PHEIC).