The numbers behind Kinky Boots: 170 costume changes, 70 pairs of boots and 30 wigs

About 170 costume changes, 70 pairs of boots, 30 wigs and a total of 60 people who work so that each day ends with the resounding of energetic applause that floods the... 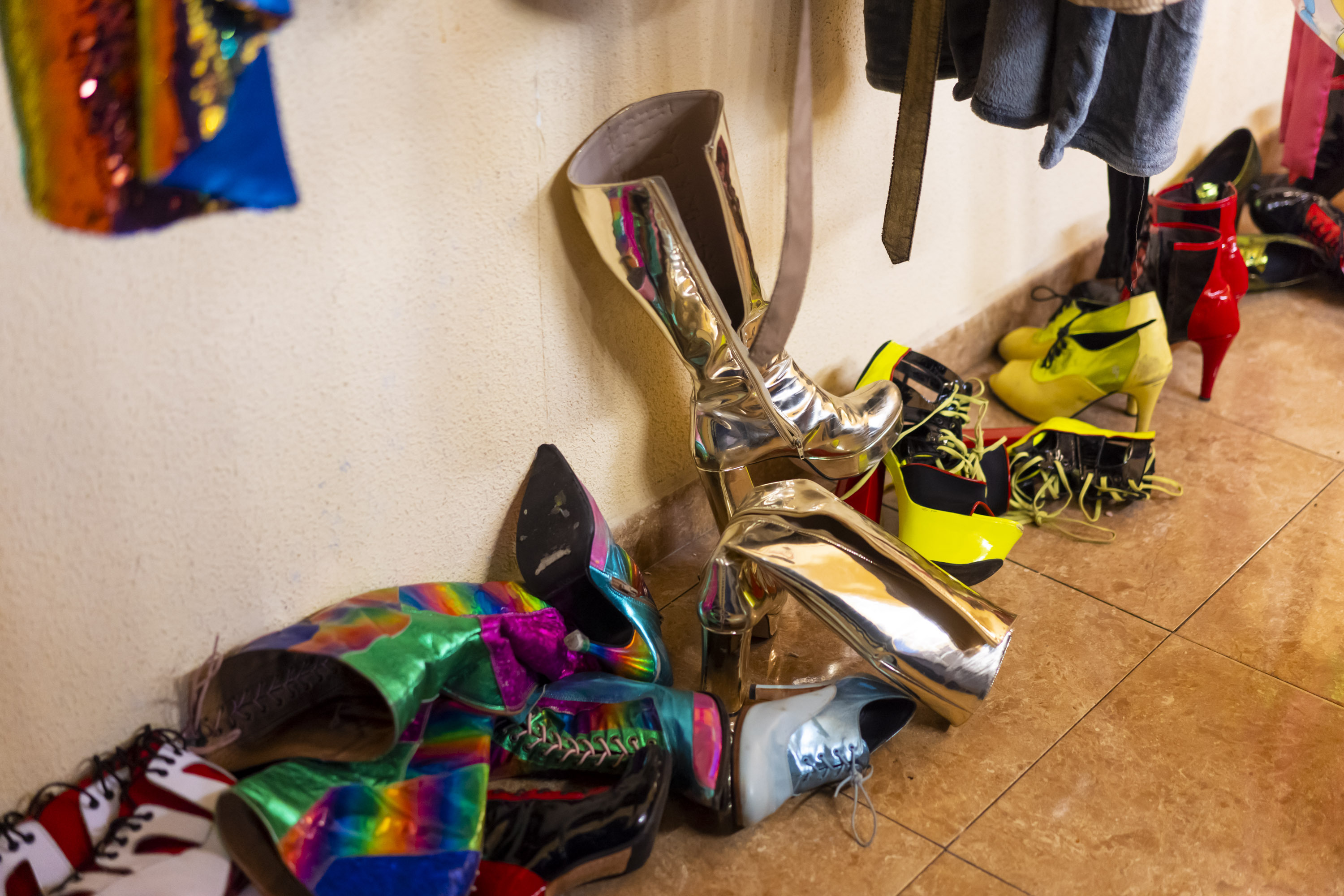 Some 170 costume changes, 70 pairs of boots, 30 wigs and a total of 60 people who work so that each day ends with the resounding of energetic applause that floods the

The behind-the-scenes numbers of

reflect the work behind one of the season's most successful musicals, winner of six Tony Awards.

70 pairs of boots are used in the musical. ANGEL NAVARRETE

- steps on the stage, the movement in the dressing rooms is constant and the adrenaline is already seeping through the corridors.

José Montero, one of the artists who plays a

, is in one of the processes in which he requires more concentration.

For him it is the most difficult part of all of his makeup: he must cover half of his eyebrow to raise his eyelid.

Luckily, he tells him, he's already picked up the pace.

The first few times he could spend up to two and a quarter hours in front of the mirror, now it takes an hour less.

Smiles before stepping on stage.ANGEL NAVARRETE

"There is a moment when I have to fall on stage. The other day I really slipped. I had a milk... and, of course, they had to remove the lights but they did it in a super weird way" , bill.

and he takes the opportunity to give the first snip.

To his right is Anabel Ramiro, second in characterization, delicately combing one of the wigs that will be used in the show.

She must follow the same procedure with more than twenty others.

A job that takes him more than an hour and a half every day.

Anabel Ramiro styling one of the wigs.ANGEL NAVARRETE

Dani, as her classmates call her, looks in the mirror for a few seconds and approves the haircut.

While she goes to his dressing room, she compares the theater with gastronomy to explain why he never gets bored of becoming

every night, one of the "most beautiful" roles he has ever played.

"It's like a meal that you like a lot, but you can give it your little touches. One day the joke tries it in another way or internally every day you think of different things to interpret the different moments. And in the end I don't get bored for that , because I'm not an actor who does the same thing every day," he acknowledges.

- The functions to which my parents come.

I have a sick mother, who has Alzheimer's, and she recently came to see it with my dad.

On his dresser, the 41-year-old actor keeps a box of tea, as well as candy and incense, which he lights as part of his behind-the-scenes cabal.

"Before I start I do a meditation to feel enlightened and to perceive my energy; my arms, my hands, my legs...", he comments.

In the adjoining dressing room,

(Lola) inspects his armpit with a razor in his hand;

he hasn't got a hair left.

He now gives himself to Jose, who requires an hour to do his hair and make-up.

"I need to be very focused because when he's done it's time to put on my clothes, test the sound and then the show starts," he says.

In the mental list that Tiago has made today, he knows that he has a very special task before the musical starts.

"I bought a Green Lantern costume to make a video call with my 3-year-old nephew, who lives in Brazil, and tell him that he has to take a shower. Then I have 40 minutes to get dressed and ready."

The Brazilian actor, who played Simba in the Lion King for eight years, was the first in the company to get acquainted with the text of the show.

"I started taking classes to wear heels, also to learn about feminine manners and phonetics," he recounts.

And is that Lola has nothing to do with him.

"I am very serious and analytical. I speak very low, I observe a lot. Lola, on the other hand, is a volcano and there is no way to silence a volcano," he admits.

He tries to give his character a bit of his mother.

"My mother was an exuberant woman, a beautiful black woman, she had a wonderful voice," he recalls.

And another bit of a great friend, "who is a trans girl and who has been through a lot of bad things, but despite that she has a heart and a vision of life that is full of dignity and respect," she stresses as she she paints her nails red to match her lips.

Some time ago, at the rehearsal in which the cast had their first contact with the musicians, he remembered everything his parents had done for him.

"All the times my mother stopped to sell candy on the street or my father went from house to house offering to paint them so he could have the money so I could study," he admits with a lump in his throat.

"That day I almost couldn't sing the song. I was left with a feeling of gratitude towards these two people who have done everything in their lives so that today I can be a respected man in my work."

(Lauren) listens to Rosalía's latest album, which she alternates with Bad Bunny's.

"I need happy music," she admits.

She is one of those who needs less time to put on makeup, in half an hour or even less she can be ready.

If she can, go to the hairdresser beforehand to get some help with her hair, because she has it "rebellious," she maintains.

It's a quarter to eight and the time to go on stage is approaching, many have already tested the sound of their microphones and are ready to vibrate for two and a quarter hours.

The musicians, including a pianist, a bassist and a drummer, as well as the conductor, also wait for the signal.

Angy doesn't forget to thank the universe for the job she has.

"We don't know where we're going to be in two months because this job is like that, and that's what gives me strength and motivation," she says.

Tiago thinks about the day when his family can finally see him fulfilling his dreams on a Spanish stage.

Dani looks at Alberto Sánchez (Mr. Price), both are the first to enter: "Come on, let's fill the souls."