[Report File] Can't we do the superintendent election?

What is the unification of the superintendent's candidate? Last May 7th, at 10:30 pm, the cell phone rang. It was a text message from Lee Joo-ho, Park Seon-young, and Jo Jeon-hyeok, preliminary candidates for Seoul Superintendent of Education, to announce an agreement for unification in front of the Seoul Office of Education on Sunday, May 8 at 9:00 am. 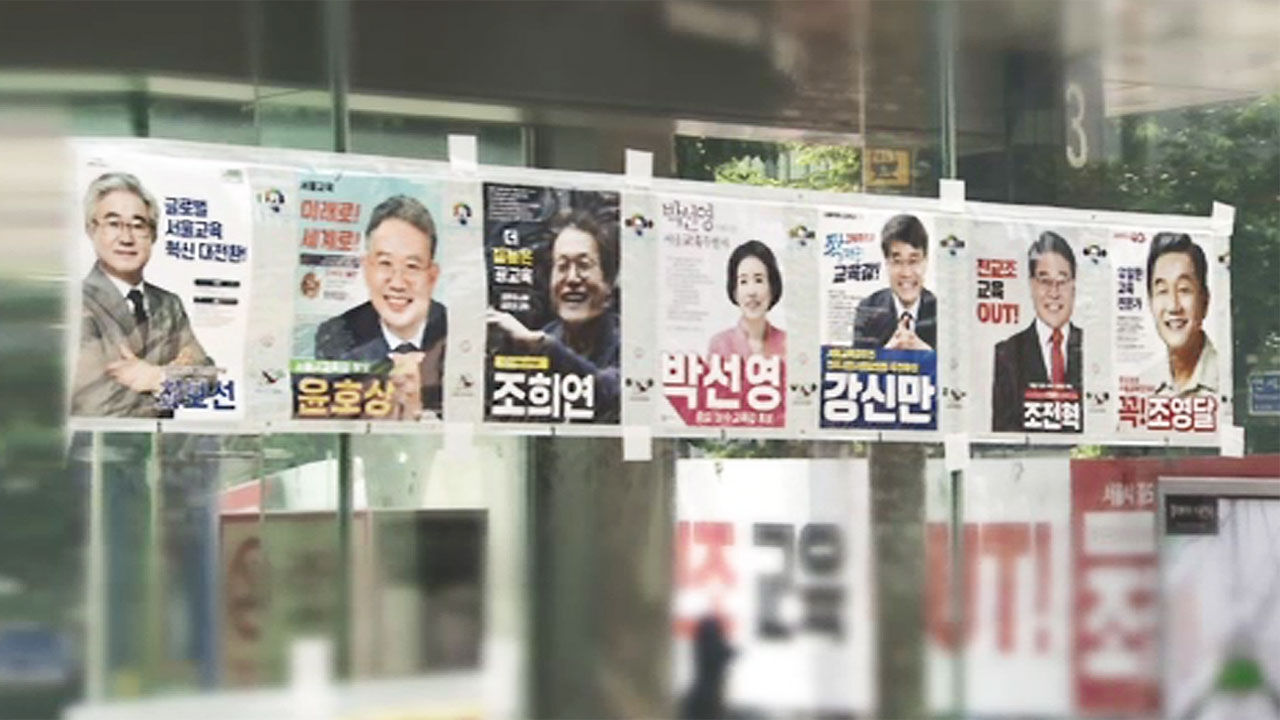 What is the unification of candidates for superintendent?

It was a text message from Lee Joo-ho, Park Seon-young, and Jo Jeon-hyeok, preliminary candidates for Seoul Superintendent of Education, to announce an agreement for unification in front of the Seoul Office of Education on Sunday, May 8 at 9:00 am.

A child who grasped the contents of the text next to him screamed.

"We too are someone's parent, someone's child. Shouldn't we be replying like this?"

Sending a text message late on Saturday night and announcing that a press conference will be held on Sunday morning, also on Mother's Day, must have come from the judgment that it is such a serious matter.

In the conservative camp, unification of the candidacy of the Seoul Superintendent of Education was seen as a necessary condition for victory, so they must have wanted to convey the news of a dramatic unification agreement to reporters as soon as possible.

In the background of Candidate Jeon-hyeok Cho's abusive language scandal against Candidate Sun-young Park, there is a conflict in the process of unification.

Park Yong-soo, secretary general of Seoul National University, who challenged the Incheon Superintendent of Education in the 2018 local election, said that the complete indifference of voters was the reason why he decided to resign midway.

He registered as a pre-candidate and circulated business cards for 60 days, trying to explain his educational philosophy and policies to each citizen for at least 10-20 minutes, but nobody paid any attention.

He went all the way to the West Sea island region to explain the policy with sincerity and appealed for support.

If you keep asking questions like this, you seem to have lost your strength.

Until just before running for office in 2018, Park Yong-su, then superintendent of education at Incheon, acted as superintendent of education, which became vacant due to a bribery case, and was more aware of the problems of Incheon education than anyone else. He declared a three-way election without an 'election fund' and showed enthusiasm to change the paradigm of the superintendent's election, but he realized that he could not overcome the reality dominated by political engineering rather than policy competition, and eventually ended the election campaign.

And last winter, ahead of the upcoming election season, Director Park published a book titled 'The Superintendent Election: Why Education Is Broken' and asked the question of whether the direct system of superintendents should continue.

"If the education budget for the superintendent election is 200 billion won, 50 children's school auditoriums can be built. But the citizens don't know. I'm the first person to say, 'The budget is 200 billion.' So far, no one has known in the Republic of Korea, and at least it has never been announced.

The wall of indifference that Director Park Yong-su suffered during the election campaign was also confirmed in a recent opinion poll.

In a poll conducted by three terrestrial broadcasters ahead of the June 1 local elections on May 14-15, the responses that they did not know or support the candidate were 60% and 70% in Seoul and Gyeonggi, respectively.

If it wasn't for the 7 trials that succeeded in unifying the conservatives and the progressives, I thought that I could win the election with less than 20% of the votes in 10 trials.

The theory of the abolition of the direct system of superintendents gaining strength...

What are the citizens' opinions?

What do you think of the argument that it is better for the president to appoint the superintendent of 17 provincial and provincial education offices like the Minister of Education, rather than spending hundreds of billions of won on a 'black and white' election that no one is interested in?

I was curious about the thoughts and opinions of the citizens about the direct system of superintendent of education, but a survey conducted by the Korea Educational Development Institute last year found relevant information.

When asked what they thought of the direct system of superintendents, 42.6% of the total respondents were in favor, while 27.8% were against and 29.6% did not know.

However, in the case of elementary, middle and high school parents, the approval rate rises to 50.9%.

Although it fell significantly from the 56.5% of parents in elementary, middle and high schools in 2019, it seems that parents are more in favor of the direct system of superintendents than the general public.

In particular, to the question of whether the superintendent election is contributing to local education autonomy, 29.7% of elementary, middle and high school parents answered yes, 44.9% said it was normal, and 25.5% said no.

Parents' evaluation of this question was also more positive than that of all respondents.

University Of course, if I have power, it’s okay to use that power incorrectly. And go to the Seoul Metropolitan Office of Education. Even if the civil servants you meet come and do strange things, they won’t kick you out. If I said that, I would pretend to listen to the voices of the citizens a little more, so I can only say that I am satisfied with the education autonomy from the point of view of citizens. Especially, the generation that has experienced authoritarian government will appreciate the enjoyment of rights as citizens rather than responsibility as citizens. listen."

I'd rather be a running mate

Professor Dae-Kwon Park's analysis is that he is not very interested in what kind of superintendent is elected and what policies will be implemented, but he feels quite satisfied with electing the superintendent himself.

Therefore, it is expected that the direct election system will continue to be maintained.

However, I point out that superintendents who are not responsible for the current system are coming out.

Once elected, even if they are arrested for taking a bribe, the shame is solely the responsibility of the superintendent, and neither the supporters nor support groups, nor anyone else, shares the responsibility.

Rather, it was argued that if the party were to join hands, the party would monitor and take responsibility for the superintendent's candidates after being elected.

Partnering with a political party?

This is not possible under current law.

In accordance with the political neutrality of education stipulated in Article 31 of the Constitution, the Local Education Autonomy Act also stipulates that a candidate for superintendent of education must quit political party activity at least one year before running for office.

It also strictly prohibits political parties from interfering in the Chancellor's Election.

When the candidates said earlier that they were thirsting for unification, it was already revealed that the election for superintendent of education was a camp battle.

Even if there are no party signs or symbols on the poster, the color or slogan indicates that you are close to a faction.

Political neutrality is a mask.

However, they are not able to utilize the organization of the existing political party, so they are spending more on election expenses than candidates for provincial and provincial governors.

You have to organize your own organization and hold a campaign for the election campaign.

The less interest the voters are, the more they spend.

Because of this 'blindfolded' political neutrality, they have to bear high-cost elections.

This has nothing to do with the successive bribery incidents of straight superintendents.

Candidates for superintendent who have to finance their own elections without party support will be weak against the black temptation.

How to reduce side effects?

Professor Dae-Kwon Park of Myongji University, who proposed the running mate, emphasizes that the constitutional value of political neutrality in education should be interpreted differently.

The purpose of being included in the Constitution should be properly looked at.

"It was clearly stated in the constitutional studies textbooks published in the early 1960s. It was entered into the constitution for this purpose, but it has been unilaterally interpreted as excluding the political participation of teachers through the authoritarian government. So, do not look too sensitive about political neutrality, If we can clearly define that political neutrality is the only thing that prevents power and state power from abuse of power in schools, then I think there are many parts that we can freely interpret.”

As political neutrality of education is guaranteed in the Constitution and amendment of the law is essential to introduce a running mate, some made a more conservative proposal.

In addition, he added that if the direct superintendent gives the principal autonomy, just as the principal of the front-line school gave the decision to switch to remote classes in the recent Corona 19 situation, the true meaning of educational autonomy can be realized.

Even if you study 'cramping' for the rest of the time

The direct system for electing superintendents by hand was introduced in 2007.

It was merged with local elections in 2010.

I would like you to reconsider the election for the superintendent of education, which has been held for 10 years under the name of <Simultaneous Local Election>, and to think about ways to improve it together.

Above all else, we must not choose the superintendent who will lead the education of future generations for four years without fail.

At the very least, we need to study 'cramming' so that we can know who this candidate is, what his promises are, and choose properly.