Javier Cabrera: The guitarist chef who devises the dishes with fasting and mezcal

"With the kitchen you suffer a lot: fingers, burns, cuts". It is the first reflection that chef Javier Cabrera (Santiago de Chile, 1981) makes when he is... 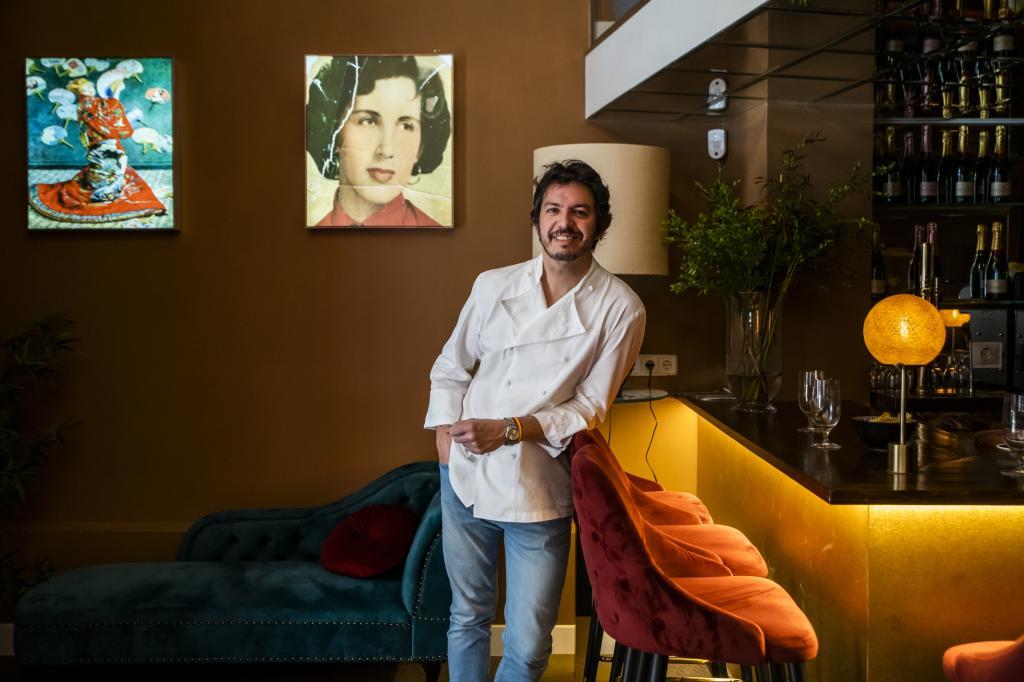 "With the kitchen you suffer a lot: fingers, burns, cuts".

It is the first reflection that chef

(Santiago de Chile, 1981) makes when he is asked why he has stopped playing the guitar, a passion that he developed at the conservatory in his native country and that, once he finished his studies at the Culinary School of Santiago, prompted him to decide where in the world he would do his internship.

He chose Spain, Algeciras to be exact: Paco de Lucía

Now it limps through the premises of its

, reopened in the central street of Marqués del Duero, 5, thanks to the contribution of five loyal customers of its first incarnation, which closed due to the coronavirus crisis.

Cabrera had recovered from an injury to his right foot that he suffered "without knowing how" on his way to the Plaza de Toro de Ventas to enjoy a bullfight at the San Isidro Fair (another of his great passions), but when he was already "like again," he bruised his knee.

At least he went on the same leg, so he hasn't had to "rehearse a new limp."

Cabrera has a clear vision of the business.

He starts from an academic and minimalist conception, with quality raw materials and a very personal touch with which he seeks to lighten the recipes, remove the fat from tradition.

Finding one's own language is the most difficult thing

When you do, all the work is done.

It is really the most important thing in a creative profession.

His latest movie may be a slop, but it has his language.

He found it years ago, and they all look like his no matter what he does.

It has almost all the way traveled.

He makes them and people see them.

Because he is Almodóvar and he has that won language.

The day that the cooks do that, that I do it, I will be able to go and live in a little boat without worry”, he reflects.

In the search for his style, he has found himself with the nickname "rebel".

And she accepts it, but with nuances.

"More than a rebel, I am someone who is contrary, a contreras. I have been all my life. At school, with my parents, in high school, in the kitchen... I have always been very much against it. And in Arrayán the same thing happens. When all the restaurants in Madrid are with

we have everything carpeted, full of curtains, with jazz in the background, few tables

... But it is a positive rebellion, with a cause». holds.

Nor does he devise his dishes in a traditional way.

, with margaritas, I go home and I don't eat during that day or that night. Maybe I won't eat for two or three days. And at dawn, half asleep, half for mezcal, I'm so hungry that the dishes come to mind. The next day I write them down and take them out here in the restaurant. It's an interesting method," he confesses.

This is how, for example, their acclaimed

spaghetti with Parmesan and truffle

or their white garlic from Malaga with red wine sorbet, smoked sardines, grapes and pimpernel leaves were born.

Little friend of socializing with the union -

. I do not care about them", he assures - he arrived in Madrid fleeing from a love affair with a woman from Güimar, Tenerife.

His intention was to "reflect for a couple of months" but a week later he was working in a city with which he declares himself in love.

"I am very comfortable. I live next to the restaurant, I have the Plaza de Toros a 20-minute walk away and the Retiro Park one street away.

I live well and happy