"The struggle of the court clans": how the Streltsy uprising of 1682 influenced the fate of Tsar Peter I

340 years ago, the Streltsy rebellion began in Moscow, provoked by rumors about the intention of the boyars to exterminate the royal family. Streltsy broke into the Kremlin and killed several influential statesmen. Historians still do not have a consensus on the true background of the uprising. Some associate it with the intrigues of the Miloslavsky family, others with the objective dissatisfaction of the archers with the situation in the country. Because of the rebellion, an attempt by members of the Boyar Duma to make the underage Tsarevich Peter Alekseevich (future Peter I) the sole ruler of Russia failed. As a result, Peter's brother, Ivan Alekseevich, became his co-ruler, and Sophia, the elder sister of the young kings, became regent. 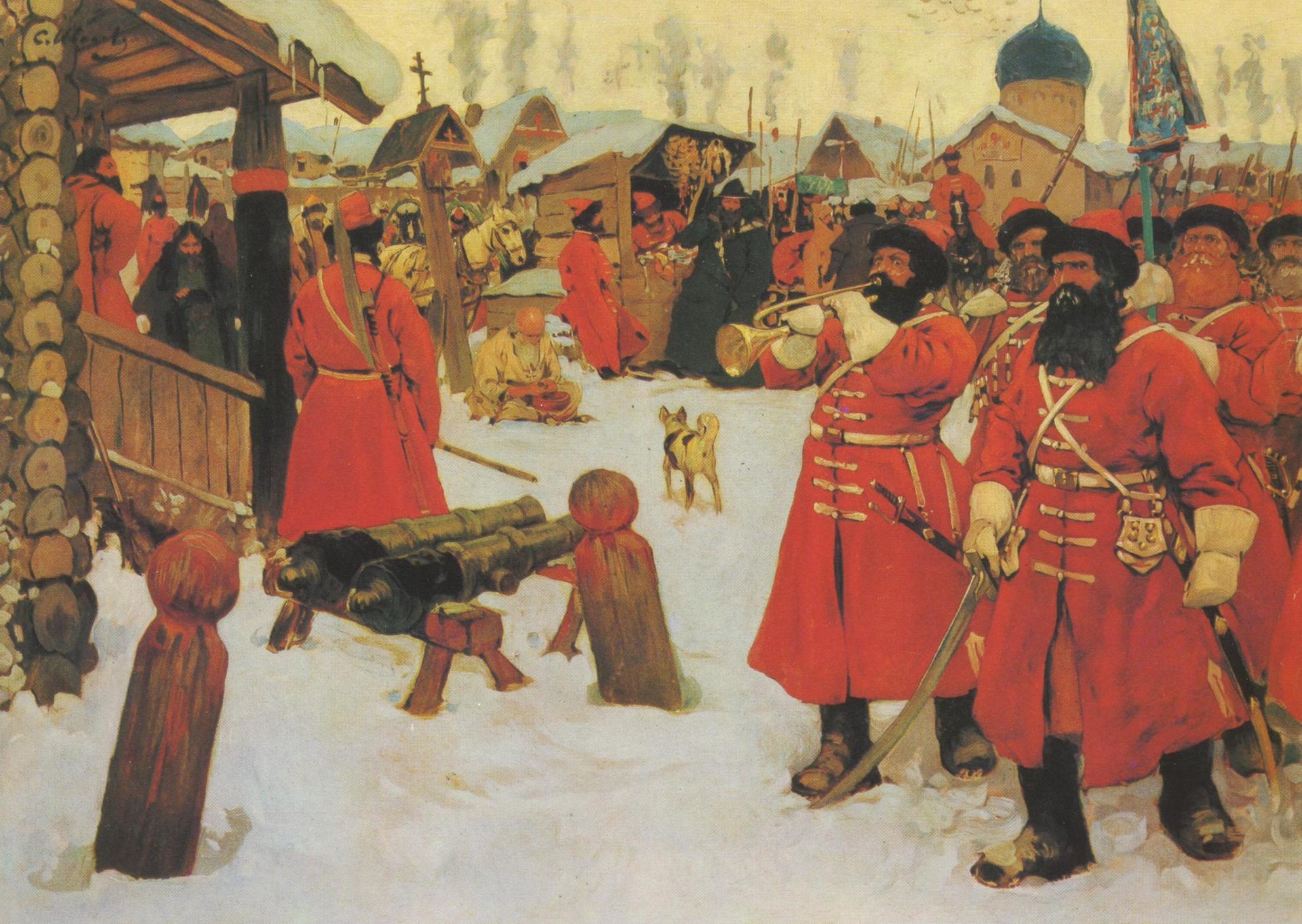 Its participants brutally cracked down on a group of statesmen who tried to declare the nine-year-old Pyotr Alekseevich the sole ruler of Russia.

As a result, the tsarevich's paternal brother Ivan Alekseevich became his official co-ruler on the throne, and his sister Sophia became regent.

It was she who, for the next seven years, actually owned power in the state.

Preconditions for an uprising

A professional archery army arose in the Russian state in the 16th century, during the reign of Ivan the Terrible.

It obeyed the Streltsy order (an analogue of the military ministry).

Historians note that in terms of their social status, weapons and tactics, the archers largely resembled European musketeers.

“The archers were an effective professional army that had proven itself in numerous wars.

They were steadfast fighters who had a special ethic of corporate unity, which forced them to support each other both in wartime and in peacetime, ”said Dmitry Volodikhin, professor at Lomonosov Moscow State University, in a conversation with RT.

However, the historian called the corruption of his command the main "disease" of the streltsy army.

“Unfortunately, the command of the archery regiments practiced bribery, involving archers in household work in the personal interests of the chiefs, and underpayment of military salaries.

Because of this, dissatisfaction with the current situation has matured among the archers for a long time, ”Volodikhin emphasized.

According to historians, the political processes that took place in the Russian state in 1670-1680 became the catalyst for a social explosion in the streltsy environment.

The heir to the throne was Fedor Alekseevich - his son from marriage with Maria Ilyinichnaya from the Miloslavsky family.

Fedor was well educated, he wanted to reform the army and the administrative apparatus.

But he did not have time to complete what he started: six years later, on May 7, 1682, he died under circumstances that were not fully clarified, according to one version, from scurvy.

It is worth noting that poor health was a hallmark of all the sons of Alexei Mikhailovich from his marriage to Maria Ilyinichnaya.

Fedor died childless - his only son died in infancy.

According to historians, Fedor's younger brother, Ivan, could formally claim the throne.

However, it was also extremely painful.

According to some modern researchers, Ivan suffered from epilepsy and scurvy.

But the Miloslavsky family supported Ivan's candidacy as a pretender to the throne.

However, the sympathies of the majority of the members of the Boyar Duma turned out to be on the side of another heir - the son of Alexei Mikhailovich from his second marriage (with Natalya Kirillovna from the Naryshkin family), Peter.

With the assistance of the Naryshkins, nine-year-old Peter Alekseevich (future Tsar Peter I) was declared tsar on May 7, 1682.

“In fact, it was a struggle of court clans, and young children here acted exclusively as creatures,” said Alexei Sinelobov, associate professor at Moscow State Pedagogical University, in a conversation with RT.

“Fyodor Alekseevich at one time, following the results of consideration of collective complaints filed by archers, arrested several colonels on suspicion of economic violations.

But after Fedor's death, they were immediately released.

Together with the news of the enthronement of a nine-year-old boy, this created the impression among the archers that the boyars had seized real power and would soon begin to rob them uncontrollably.

The regiments began to refuse to take the oath to Peter, ”said Andrey Bogdanov, a leading researcher at the IRI RAS, in an interview with RT.

Historians are still arguing about what happened next.

In turn, Andrey Bogdanov believes that representatives of the active part of the archers themselves chose new commanders and appointed agitators, who began to spread rumors among the people about the poisoning of Tsar Fedor and his son Ivan by the boyars, as well as about the attempts of the boyars to exterminate the entire royal family.

On May 25, 1682, armed archers, unfolding their banners, entered the Kremlin.

Ivan confirmed to the audience that everything was in order with him.

The influential boyar Artamon Matveev, a close associate of Alexei Mikhailovich, almost persuaded the archers to disperse, but one of the leaders of the Streltsy order, Mikhail Dolgorukov, intervened.

He began to scold his subordinates and rudely demanded that they leave the Kremlin.

His behavior angered the archers.

Incited by the supporters of the Miloslavskys, the military rushed at Dolgorukov and killed him.

After that, the archers began to look for other statesmen, who, at the suggestion of the Miloslavskys, were considered traitors.

The Streltsy presented an ultimatum to the authorities, demanding that they pay all their salary debts.

Sophia assumed responsibility for fulfilling this requirement, although at that time the power in the country did not formally belong to her.

According to historians, she ordered to collect money for payments to archers throughout the country and even to melt gold and silver dishes into coins.

“In the bloody nightmare that is taking place in Moscow, the men were afraid to say a word, because they could immediately die for it.

Looking at the bloodied weapons, Sophia turned out to be the only member of the royal family who found the strength to talk intelligently with the archers, convincing them that everything would be fine, that all their requirements would be met, and Ivan would be restored to his rights, ”said Andrey Bogdanov.

According to other historians, Sophia personally stood behind the conspiracy and dictated ultimatums to the archers, which they then announced.

That is why the rebels demanded that Ivan be recognized as king, and Sophia as regent.

On June 5, 1682, the institution of co-government was announced in Russia.

Against the background of the uprising, the Streltsy order was headed by Prince Ivan Khovansky, who tried to maneuver between the official authorities and the archers, and his influence on the political processes in the country increased dramatically.

Streltsy were renamed "outdoor infantry" (analogue of the guards) and achieved recognition of their actions not as a rebellion, but as a struggle against "traitors".

The text of the corresponding letter of commendation was written on a stone pillar installed on Red Square.

Some streltsy demanded the return of the "old Orthodox faith" and insisted on holding a dispute between church hierarchs and schismatics.

However, according to historians, this dispute did not lead to anything.

Representatives of the royal court and the Boyar Duma, who did not want to live surrounded by the rebels, left Moscow.

In September 1682, Princess Sophia also moved to the village of Vozdvizhenskoye, located near the Trinity-Sergius Monastery.

Soon she received an anonymous denunciation of Khovansky, in which he was accused of treason and preparing an assassination attempt on members of the royal family.

The head of the Streltsy order was captured and executed.

A collection of troops was announced throughout the country, which were supposed to support the royal power.

“In the course of further negotiations, Sophia and her comrades convinced the archers to refuse to interfere in state affairs and the status of outdoor infantry.

Otherwise, they were threatened with being accused of speaking out against the legitimate authorities,” Andrey Bogdanov said.

As a result, the archers repented of their actions and were forgiven.

The royal court returned to Moscow.

The stone pillar with the text of the letter on the rights of archers was demolished.

“The real ruler of Russia was Princess Sophia, but seven years later Peter removed her from power and sent her to a monastery.

The events of 1682, during which his relatives were killed in front of the king, many explain the harsh nature of Peter and his further cruelty towards the archers.

It was under him that the archery army was disbanded, ”summed up Alexei Sinelobov.