Doctors and nurses out on the streets... 'War' over the enactment of the Nursing Act

A bill regulating the role and duties of nurses was passed by the National Assembly's Health and Welfare Committee last week. However, there is even talk of a general strike as voices for and against this law are mixed within the medical community. 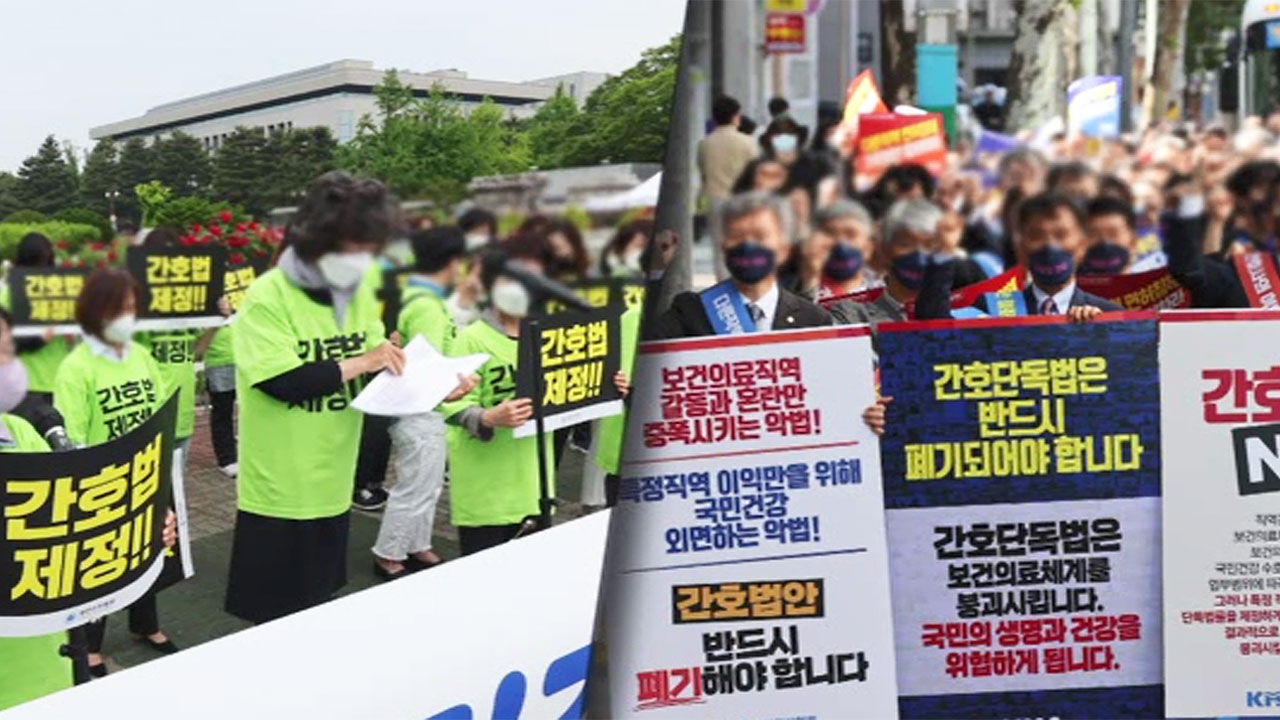 A bill that newly defined the role and duties of nurses was passed by the National Assembly's Health and Welfare Committee last week.

However, there is even talk of a general strike as voices for and against this law are mixed within the medical community.

First of all, reporter Kim Deok-hyun will explain why such a conflict arises.

7,000 doctors and nursing assistants took to the streets.

[Increasing confusion in the medical field, the Nursing Act is absolutely against!

Ten days ago, more than 5,000 nurses and nursing students gathered and shouted for the passing of the Nursing Act.

There are 460,000 nursing license holders, but only half of them are actually active nurses.

Due to the high work intensity and poor working conditions, the average tenure is only 7 years and 5 months.

[University Hospital Nurse A: Finding a nurse is really picking a star in the sky.

It is true that when a new nurse comes in, it leads to resignation and the continuity of work decreases.]

Nurses claim that improving treatment and clarifying the scope of work through the Nursing Act will improve the quality of medical services.

That is why it is necessary to separate the nursing method from the medical law, and newly incorporate 'nursing act' and 'activity space'.

In the bill, the phrase that caused a conflict with the controversy over nurses' 'independent activities' was maintained as the existing medical law provisions.

A key issue is the expansion of nursing practice locations from traditional medical institutions to the community.

[Kang Ju-seong / Nursing Citizens' Solidarity Activist: That the nursing work tied to the hospital comes out of the area.

To create a regional integrated care system, it is essential to have medical services.

You think you can paint a much more complete picture.]

Doctors and nursing assistants argue that the medical system will collapse.

[Woo Bong-gi / Director of Medical Policy Research Center, Korean Medical Association: Because it is difficult at the hospital, 'Then come out and do community care in the community.' If you do this, the damage will eventually go to the patient.]

The nursing bill is in the legislative committee of the National Assembly. , both sides are even offering a general strike card if their will is not fulfilled.

▶ First responders and nursing assistants protest over the nursing law, why?