The colony of Pico del Pañuelo: past and present of Madrid's 'yellow triangle'

Some neighbors, the least, remember how years ago the children of the Pico del Pañuelo neighborhood played ball in the street. Also how the elders, when the... 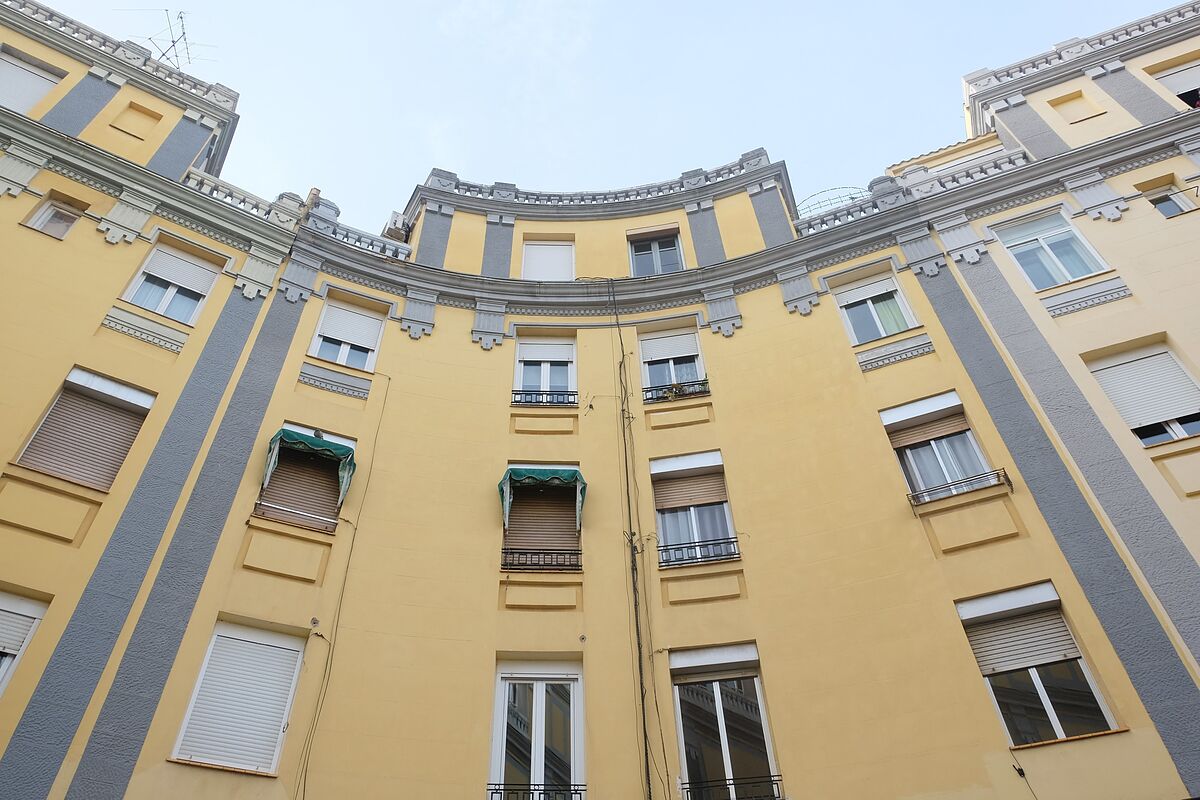 Some neighbors, the least, remember how years ago the children of the Pico del Pañuelo neighborhood played ball in the street.

Also how the elders, in the late afternoon, took their chairs out into the street to exchange confidences until late at night.

Of that way of life, only the hanging clothes that appear at the windows remain, revealing a plot of intimacy for those who live behind them.

Stretching their memory, they say that these houses designed almost a century ago were

designed and built for the workers of the old slaughterhouse

and the Legazpi market.

Attracted by the opportunities that the capital offered to cheap and unskilled labor, many families staged an exodus that brought with it the need to build new homes.

, who had previously worked on similar projects, such as the Retiro and Primo de Rivera neighborhoods, was in charge of planning the construction of the 74 houses and their more than 1,500 dwellings that are still standing today in the district of Arganzuela, at the crossroads delimited by Paseo de la Chopera, Paseo de las Delicias and Calle Guillermo de Osma.

The name of the neighborhood responds to the triangular plot they occupy, whose silhouette, seen from above, is reminiscent of a folded handkerchief.

Painted in a yellow color that is dotted with some chipping and various humidity, the common feature of these houses is their four floors crowned by an attic.

Inside, they house apartments that do not exceed 50 square meters.

According to the architects Amaia Mateos and Tomás Villanueva in their

Constructive and Structural Analysis of the Pico del Pañuelo neighborhood

, published in 2015, the houses were designed "following the legislation on

and it represented a change in the trend at the beginning of the 20th century of make neighborhoods of single-family homes, by building blocks of apartments of medium-high density. The structure and construction of the neighborhood is economical, but its external appearance has more pretensions, "they say.

In the same document, it is also stated that one of the measures adopted, presumably to reduce costs, was the original absence of tiles in the toilet: "the walls of the WC will be painted up to a height of 1.20 meters with washable enamel paint, which will replace the tiles that are customary to place in these rooms".

In contrast, the report also reflects how the exterior of the buildings is visibly differentiated from the rest of the constructions: "

Its composition is clearly classic and careful

. Even though they are cheap houses for workers, the brick of the facades is hidden under a stucco that is painted of different colours, thus giving the buildings a representativeness typical of upper-middle class neighbourhoods".

Hundreds of workers from the neighboring industrial slaughterhouse and cattle market lived there for decades.

From those years, the newspaper library throws endless details.

Chronicles of yesteryear speak of children turned into adults by forced marches in slaughterhouses.

Calloused hands heated by the fire of newspapers.

Of a humidity, that of the Manzanares, that permeates to the bone.

The slaughterhouse, now converted into a cultural space, remained active until 1995, after poor hygienic and sanitary conditions and low productivity led to its closure.

Witness to all this, the colony of Pico del Pañuelo also blames the passage of time.

Those who used to comment on the comings and goings of the butchers, with their bloody aprons and tired faces,

They assure that it has sneaked into several portals and homes, but that their complaints are not heard.

They also talk about fights and brawls.

Of fights that lead them to spend more than one sleepless night.

From a situation of abandonment in which, they say, they have been installed for too many years.

This redoubt lives mired in a kind of limbo that, however, does not prevent the prices of these houses, according to the neighbors, from continuing to rise.

Those that are inherited end up being rented for short periods of time.

Meanwhile, just a few steps away, life goes on in the new slaughterhouse.