Madrid lives a long and intense idyll with Japanese cuisine. If a couple of months ago we dedicated ample space to talking about new proposals, today we have to do the same... 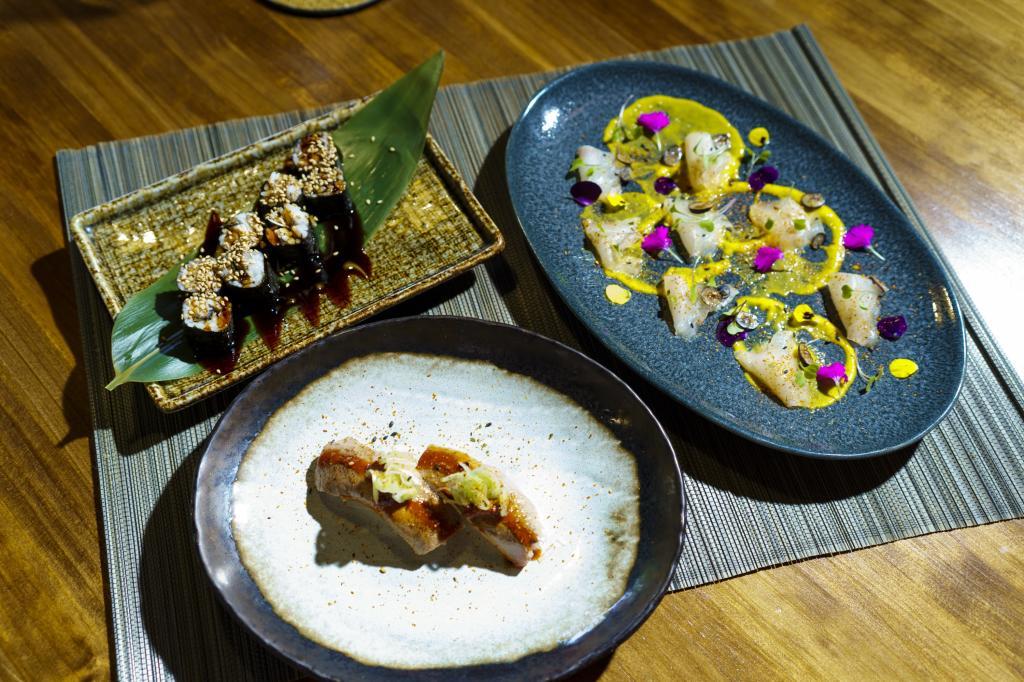 Madrid lives a long and intense idyll with Japanese cuisine.

If a couple of months ago we dedicated ample space to talking about new proposals, today we have to do the same to expand the list, because the openings follow one another.

Today we are talking about

five new spaces where sushi is another story

Fernando Point writes today in the newspaper the criticism of Zuara Sushi, one of the openings of the season, according to him.

The other four novelties are presented in these lines.

Jorge González (44 years old) has returned to his origins.

This chef from Madrid, experienced in the kitchens of 99 Sushi Bar, Kirei, Minabo and Makitake, to highlight a bit of his resume, has just opened a

"I wanted to go back to my neighborhood of all my life and do something different and attractive outside the center," he explains at the door of the premises.

The idea was also to contribute their grain of sand to revitalize small businesses and put the area on the map.

"Here we are surrounded by fishmongers, greengrocers, butcher shops... We support them in everything we can," he says while watching to make sure the rice doesn't overdo it.

Here there is no "moderneo" nor posturing

"Among our clientele there are groups of young friends, but also older couples who appreciate gastronomy and are looking for different plans."

The pandemic and, more specifically, the confinement forced him to reinvent himself.

"I realized that there was no such thing as a sushichef delivery service," he enthuses.

He shaped the idea and began to work in private homes.

The reception was very good and the idea caught on relatively quickly.

"Clients began to suggest that I open a space, in which to organize dinners or meals for small groups."

Nor did that seem unreasonable to him and he began to look for a place.

"A friend who has a bakery nearby told me that there was a free place in the back of the galleries."

As soon as he saw it, he knew it was the place for what he wanted to do.

"Incredible light and the perfect size."

"We have capacity for 7-8 people", he comments in front of the high table where diners usually sit. "

The space is closed by groups, to provide an exclusive experience and careful attention to detail

". Details obsess Jorge, according to him himself confesses "The experience includes everything: the place, the somewhat clandestine vibe, the privacy and the gastronomic proposal".

has become the preferred option so far, with 8 or 9 courses that include miso soup (in winter) and seaweed salad (in summer), different pieces iconic among usuzukuris or tiraditos, hosomakis, gunkans or uramakis and various nigiris, such as otoro with sobrasada flambé.

"We use high-quality products, from Minori rice to Balfegó tuna."

Also, if you prefer, you can order a la carte, enjoy your 'take away' (always prior reservation) or request the home chef service, which is still operational.

With just a few days of filming, Casa sr.

Ito is presented as a space with the soul of a tavern and a cheeky spirit, fun and with fusion as its flag.

Ito, there is no single label that defines it, they prefer to

mix touches of traditional Japanese cuisine with the most cañí

, but also Castilian and Andalusian.

Located at number 6 Marqués de Riscal street -opposite Asiako, also from the group-, the new project by Iban González -at the head of the room- and chef Sergio Monterde tastes like fried foods, pickles and sandwiches with their own style, yes indeed.

The gilda with anchovy vinaigrette, pickled onion in Modena vinegar and seaweed and the salad with spider crab, pickles and kimchi accompanied by prawn bread are postulated as house hits.

The traditional wink can also be seen in the baos, of squid and torreznos.

The katsu sando with pork ribs and the cooked gyozas and oxtail are essential.

From Chamberí to the Salamanca district, where Ikigai Velázquez (located at number 136) has just landed, the new proposal by chef Yong Wu Nagahira, who has carved out a good legion of fans who love Japanese cuisine from his Flor Baja location .

He arrives in the area with a "more democratic" proposal in economic terms (between 60 and 80 euros), with some of the iconic dishes of his first place and his appreciated nigiris, but also with new creations where the personality of the young man can be seen Chef.

With an interior design reminiscent of a New York apartment from the 1980s, his sushi bar is one of the most pleasant places on the premises.

The latest to join the list is La Madonna (Diego Ayllón 12), the seventh restaurant of the Sushita group, which also opened its doors a few days ago.

the tandem is made up of Italian and Japanese cuisine

They incorporate pizzas and carpaccios to their menu, where they also offer an attractive range of cocktails.

The decoration, coquettish and with pieces from different parts of the world, follows the pattern of the other premises.

Its atmosphere is informal and offers good value for money.