President Yoon "The road to national unity together"... Dangjeong on the KTX in Gwangju

About 100 party officials, including President Yoon Seok-yeol, the new government ministers, the presidential staff, and lawmakers from the People's Power, boarded the 'KTX special train to Gwangju today'. 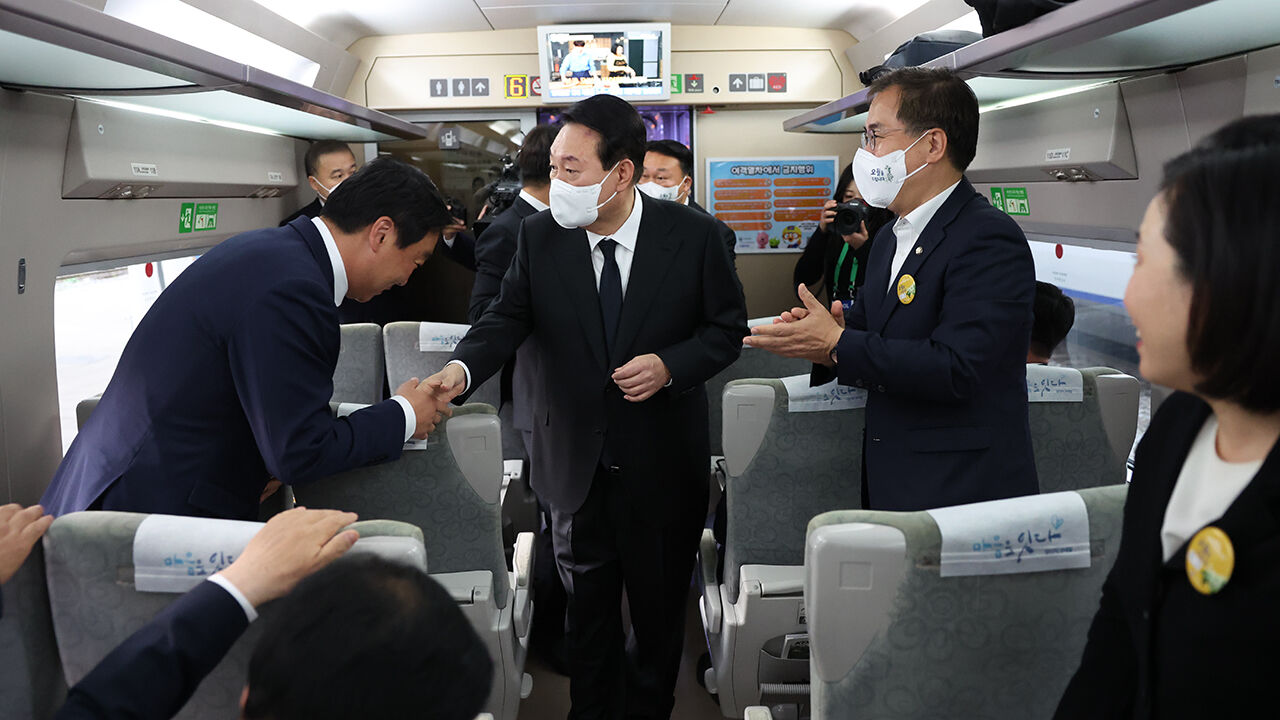 About 100 party officials, including President Yoon Seok-yeol, the new government ministers, the presidential staff, and lawmakers from the People's Power, boarded the 'KTX special train to Gwangju today' (18th).

This train, which departed from Seoul Station at 7:30 am today, is a special flight organized to attend the 42nd anniversary of President Yoon's May 18 Gwangju Democratization Movement.

Behind Car No. 1, which is dedicated to President Yoon, the State Councilor and the People's Power leadership got on cars 2 and 3, respectively, and the rest of the lawmakers got on cars 5 and 6, respectively.

Seven lawmakers belonging to the People's Power Honam Companion Group with Honam as the 'second constituency' also boarded the Khan-in No. 2 car right after President Yoon along with the State Council members.

According to the People's Power estimates, a total of 100 people, including one outside party representative, Lee Jun-seok, will attend the ceremony today, and 86 of them are believed to have boarded the KTX to Gwangju with President Yoon.

The attendance rate is close to virtually all attendance, except for those on sick leave due to COVID-19 or some personal circumstances.

It is expected to be the 5/18 commemoration ceremony with the largest number of Conservative party politicians in history.

It is also known that the party pre-distributed the sheet music of 'March for You' to lawmakers for the commemoration ceremony.

From around 7:40, right after the train departed, President Yun expressed his welcome by shaking hands and saying goodbye to everyone as he went back and forth in the car behind the train where the State Councilors and lawmakers were boarded.

One re-elected lawmaker shook hands and thanked him for attending, saying, "Thank you for being with us on the road to national unity."

It is said that lawmakers from Honam within the party responded to President Yoon by saying, "Thank you for keeping the promise I made when I was a presidential candidate."

At that time, in the train car, people said that there was a comfortable atmosphere as they talked about Rep. Heon-seung Lee, who celebrated his birthday, together.

President Yoon is said to have waved his hand to the lawmakers who were about to stand up and say, "Sit down quickly."