Lucía Grávalos: "If we all go to Mercadona we lose the essence of the neighborhood"

As a child, the revelation chef Lucía Grávalos (Logroño, La Rioja, January 6, 1989) accompanied her grandparents to the market by the hand. "And I say my grandparents because... 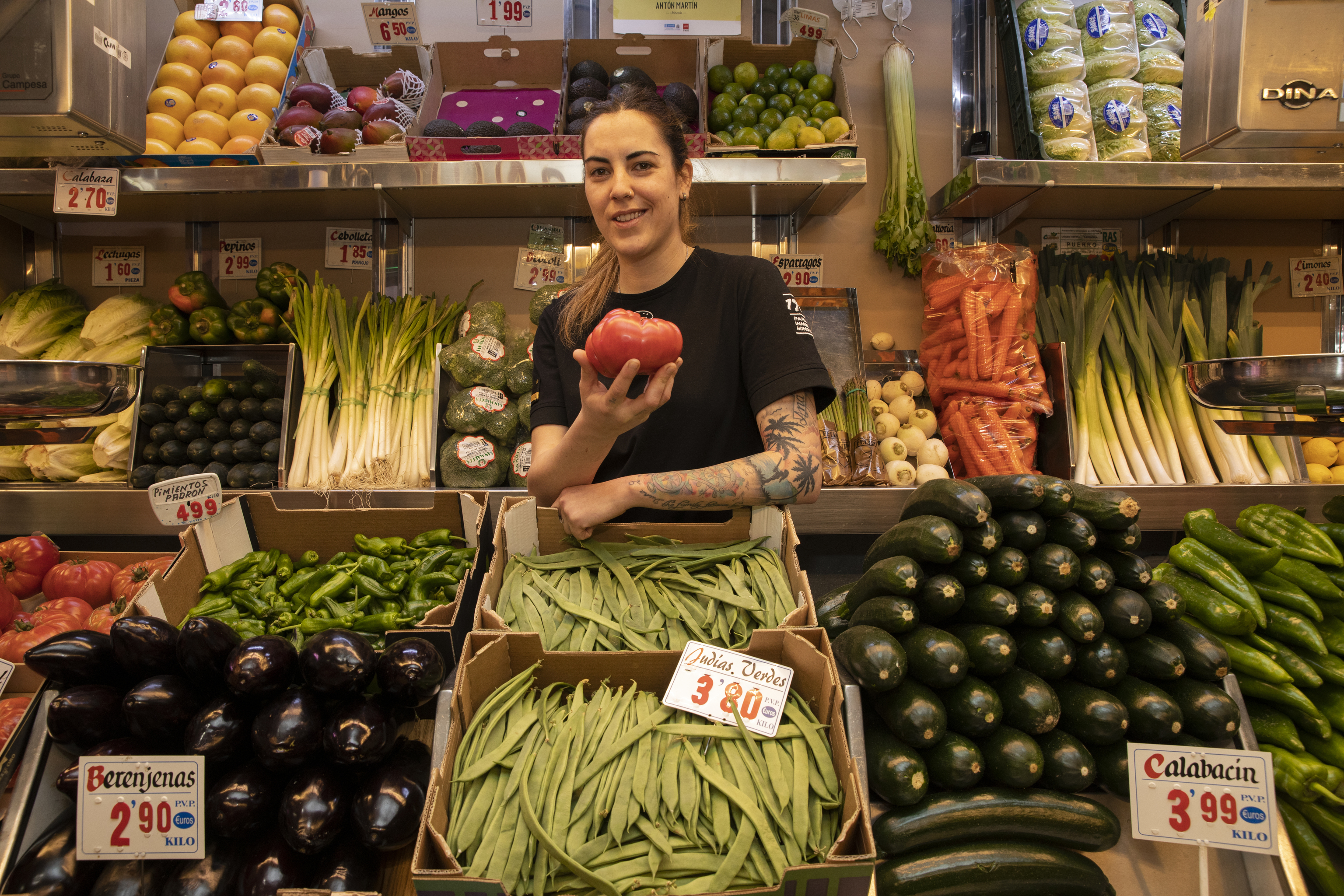 As a child, the

Lucía Grávalos (Logroño, La Rioja, January 6, 1989) accompanied her grandparents to the market by the hand.

"And I say my grandparents because they

always went and continue to go shopping together, like a pack

From Ana Mari she takes inspiration to adapt her recipes.

"I make my own versions of the dishes and it drives her crazy."

De Marino says that he is very proud of his granddaughter, but there is no way he is going to taste his famous vegetable dessert, and that he tastes very sweet.

"I have to prepare a traditional roast for my grandfather, with his baked potato, without giving it any more thought."

It is another more traditional generation, he justifies, because his, the thirtysomething generation, is much

and enjoying the experience.

"My grandfather is badly educated, because he went from his mother's delicious food to my grandmother's. But that doesn't happen anymore...", he laughs, knowing that in the current maelstrom, where we all run from here to there, each time there is more

That does not mean that you should take time to buy well, which results in eating well.

, which inspire "creativity" in him, he says.

"Whenever I go down for some wild asparagus I come back with three more things that weren't on my list and that's because places like this are inspiring and everything enters your eyes," he slides around the stalls of Antón Martín, in Atocha .

"The truth is that I would love to have more time to go through them all. I've been in Madrid for a year involved in Mentica Gastronomico," she tells Fernando, at her fruit and vegetable stall.

He is afraid of losing the magical movement and smells of the markets: "It is important to feed your neighbors."ANTONIO HEREDIA

Shopkeeper and chef exchange impressions of what has increased the shopping cart with the war.

How could it be otherwise, it is the first corner in which he looks.

"Do you have white asparagus?

I bring it from my native Calahorra. I wait for it all year

A personal commitment that emerged in full confinement, when no one gave work to small producers.

Supermarkets were something else.

"If we all go to Mercadona we lose the essence of the neighborhood.

It is important to feed your neighbors. That flow of coming and going is maintained so that there is movement and liveliness in the area. We have to give them that support or they will tend to disappear" , reflects with Fernando, who these days has few customers in the middle of

All Grávalos dishes contain vegetables, from the appetizer and side dish to dessert.

"I always have onion, red pepper and green pepper."

When they are in season,

peas, artichokes and white asparagus are not lacking.

"It's amazing cuisine," she defines, dismissing the idea that vegetables are boring.

A POSITION OF YOUR OWN

Although she prefers to sit at the table and enjoy a gastronomic restaurant, she likes the idea of ​​eating at market stalls so much that she has dared to launch her own:

, where she has a lot of fun but the bureaucracy is more complicated .

efforts with her brother Pablo

, who encouraged her to cook, because she was more into eating.

"I go every day, and he stays, that's why he's the expert in street cooking, and I go back to Mentica. We're a tandem. It's non-stop," she says of the rest of the team.

She even eats with this orchestra where everything has to sound the same.

And not always green.

"Sometimes they ask me for macaroni, of course. At home it's something else,

my pantry is a garden

The customer profile may be the same but the expectations are quite different.

"It is a more informal and faster service than enjoying the restaurant, but we are doing great with the hamburgers, which started with

. "We chose the market because of its proximity and because of that feeling that the stalls have, where people experience the product from pick up". Between them there is more collaboration than competition. "It's another roll, because

the one next door shares your struggle from morning to night

Your experience lived in another unites more ", points out Grávalos, who wears the sweatshirt of his own hamburger restaurant.

CHEER UP TO TRY

Lucia likes the hustle and bustle of Madrid.

"Here I can do on a Monday what I would only do on a Saturday back home."

When she finally has a day off, she doesn't think twice and knows all the restaurants she can.

It's a fantasy that so many places open.

Cooks learn a lot when eating!"

She also enjoys the revitalization of the markets, where there is live music, graffiti artists in action or having a glass of wine with friends.

"It's the perfect place because each one takes the food from a stall and we get together at a table. That way we don't have to agree. A marvel and guaranteed success."

If you travel, you also visit the typical souks.

"I practice the famous 'wherever you go, do what you see' and try the autochthonous. Recently I was in a four hands with the cooks of Lienzo and I got lost in the

, which seems brutal to me".

Another perennial favorite is La Boquería,

on Las Ramblas in Barcelona.

"Its diversity is unique."

And like Neruda, who dedicated an ode to tuna in the market, Lucía Grávalos is passionate about fresh fish, the product she can't resist, with permission from the garden.

"That fresh-from-the-sea smell makes me want to cook right away."

If they want to conquer him by the stomach, ask for a good stew.

She admires Martín Berasategui, "for being able to

give continuity to a kitchen as complex as his

and also in so many places".

YES TO THE TASTING MENU (LONG)

Despite the fact that it is one of the most deeply rooted traditions in our country, there is a lot of talk lately about whether or not the menu of the day should be abolished.

Grávalos thinks that there is a client for each type of menu.

"The quality menu of the day is very good, but

a tasting menu also tells you about the place, the territory, and makes a meal an experience

However, there is also some controversy over the length of the tasting menu.

There are those who think that it is not enjoyed if it is so extensive.

Should such experience have a limit?

"I like to go to other houses and that each dish tells me a story.

I am one hundred percent in favor of a

He agrees with Ferran Adrià: "It is difficult to find staff, but it is true that in my eating house, more than a few employees, I feel like my family. We are achieving

a very united team that is bigger every day".

Diploma from the Benasque School of Hospitality (Huesca), he has tanned with greats such as Berasategui himself, Álvaro Salazar or the three-

He said that the practices that he could not do he has supplied by reading.

Roncero has opened his school and the Montenevado brand has set up a Ham Campus.

"Steps are being taken with the courses and degrees that are being developed throughout Spain.

Surely we still have a lot to professionalize in the sector, but we are on the right track

. With love and effort, I am convinced that we will be more and more professional ".

a Sol Repsol for his grandma

or making his own sauces and breads for his hamburgers.

He has assumed that launching projects in the capital is hard and there is no rest.

From one side to the other, he continues scheming.