A number of charming towns dot the Community of Madrid. Whether in the Sierra Norte or Guadarrama, in the Tajo and Jarama plains or in the so-called Alcarria... 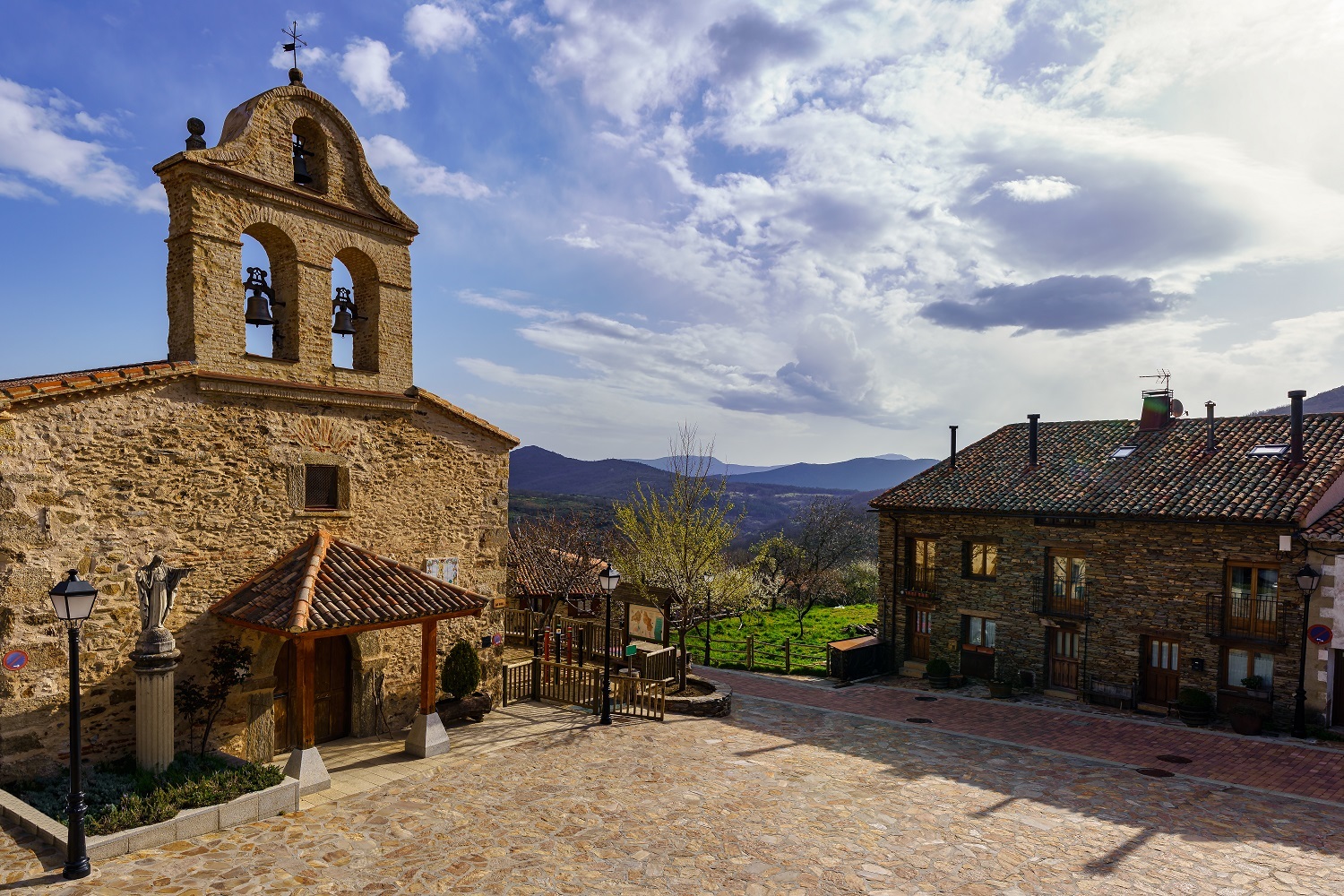 A number of charming towns dot the Community of Madrid.

Whether in the Sierra Norte or Guadarrama, in the Tajo and Jarama plains or in the so-called Alcarria in Madrid, the options for discovering new corners, beyond the best-known and most touristic towns such as El Escorial, Buitrago del Lozoya, Alcalá de Henares, Patones or Aranjuez, are almost endless.

Those who have not gone on a trip this Easter still have the opportunity to take a day trip to any of the beautiful corners that the region has to offer less than an hour and a half from the capital.

Places that, in addition to a valuable historical and cultural heritage, are located in idyllic natural settings and boast of offering the best of local cuisine.

We propose eight towns, more or less far from the tourist circuit, to which it is worth escaping during the day in peace.

In 2020, in the midst of a pandemic, this picturesque town nestled in a privileged place

, almost bordering the province of Guadalajara, was the fourth most wanted in Spain, and the first in the Community. of Madrid, among the users of the EscapadaRural.com platform to spend a few days in nature.

The environment in which it is located and its architectural identity are two of the attractions of this village of about 60 inhabitants, 100 km from the capital, surrounded by forests, streams and meadows, with the mountains in the background, from which numerous paths leave signposted.

La Hiruela is the best example of black architecture in Madrid (it is located within the route of the black towns of the Sierra Norte) and in its simple and charming town centre, the low houses made of stone, slate, adobe and oak wood from The dehesa has barely undergone changes in its structure since its construction.

The two-storey houses blend in with the surroundings due to the dark color of the black slate on the roofs and walls.

The most famous street in the town is El Pilón, through which you can reach the Town Hall, the Church of San Miguel Arcángel, the Old School, now transformed into a bar, the Casa del Cura (restaurant) and the Casa de la Maestra .

In the historic center there is also the

, which shows the ancient ways of life of its inhabitants with different farming tools, livestock and domestic tools and historical clothing.

It recreates an old rural house from the 17th century, accompanied by photographs from the time.

The only place to eat something (raciones, sandwiches and weekend menus) in the town is

(Turco, 13, Montejo de la Sierra. Tel.: 918 697 023) offers homemade food based on traditional menus, with beans from the mountains, meat, and vegetables from the garden.

Roman bridges, Arab watchtowers, medieval churches, squares dating back to the 11th century, forests, streams, a multitude of trails, the blue waters of the enormous Atazar reservoir and its

are the letter of introduction of this typical mountain village 76 km to the north of the capital to the foothills of the Sierra de La Cabrera and on the banks of the aforementioned reservoir.

Founded in the 11th century, in the Madrid municipality there are still vestiges of the Roman era, such as the

that crosses the Jóbalo Stream, and of the Muslim era, such as the

, a watchtower from the 10th century, both located at Outskirts of town.

The most emblematic place in its historic center is the

, presided over by the Town Hall building, and with the Picota in the center, where criminals were tied up to be subjected to popular ridicule around the year 1000 (it is the only one that remains of all those that were in the different towns of the Madrid's community).

Walking through the streets you reach the

(from the 13th century, on a small temple or Mudejar hermitage) and the

, one of the oldest in the area, used in the past for ironing cattle and made with large stones. monolithic granite and complementary elements of iron and wood.

The surroundings of El Berrueco are a paradise for lovers of hiking, mountain biking and motorcycles and even water sports.

Several paths of varying difficulty leave from the town center, including those that reach the aforementioned

the Atalaya path is

3.8 km long and has steep slopes, which reaches this cylindrical lookout tower of Arab origin (10th century), used in ancient times as a defense.

From there, the views of the Sierra Norte mountains and the swamp are excellent.

The biggest attraction of the place is the

Built in 1972, many people spend the day there to walk, ride a canoe, sail or sunbathe on its sandy beaches (bathing is officially prohibited).

They have a menu of the day, portions and sandwiches.

(Carretera de Cervera, km 1,500. Tel.: 679 98 98 17), on the outskirts of El Berrueco, next to the campsite of the same name, offers homemade and varied food with spectacular views of the reservoir from its terrace.

, a typical Castilian porticoed square from the 18th century, which has nothing to envy to that of its neighbor in Chinchón.

The space includes the Town Hall and the

, which has served as an old communal granary, municipal court, jail, watchmen's checkpoint, wood warehouse (to prepare the square for the steers), children's school and library along over the years.

Other places to visit in this town to the south of the Community are the gardens and the Arch of Zacatín, the hermitage of Cristo del Humilladero and the Church of Santa María la Mayor, built by the Order of Santiago in the 13th century in the shape of strength.

(1860-1916), in honor of the painter born in Colmenar de Oreja, is one of the town's biggest attractions, as it houses the artist's largest collection (admission: 7 euros).

Typical local dishes, such as messy meat or

Views from one of the viewpoints of Paracuellos del Jarama.

In the Middle Basin of Jarama, perched on a hill, is located this municipality of great beauty called

the balcony of Madrid

for the views it has over the capital.

It has several viewpoints, such as Picón del Cura or Paracuellos, from which you can enjoy the best views of the takeoffs and landings of planes from the Barajas-Adolfo Suárez airport.

Among the historic charms of the town, the Church of

Palace of the Dukes of Medinaceli

Cemetery of the Martyrs

, in honor of the people shot in November 1936, during the Civil War;

or the remains of the

, a triangular fortress dating from the 9th century, approximately.

The town is located on the banks of the Jarama River, an ideal natural environment to explore along the six routes that run through landscapes full of surrounding vegetation, which reach places as special as the old laundry, the Fuente Seca or Las Lagunas de Belvis, one of the most unique ecosystems in the Community of Madrid.

WHERE TO EAT: Arrocería Rico

There are swings for the children.

It is located in a sports center and they do not sell alcohol.

Charming town in the heart of Sierra del Rincón, declared a Biosphere Reserve, located at an altitude of 1,200 m and cataloged as one of the best examples of rural architectural ensemble in the Community.

, in which about 90 inhabitants live, are perfectly preserved, as well as its narrow streets that lead to emblematic places in the town such as the Ethnological Museum or the Church of San Nicolás de Bari.

Some walking routes leave from the historic center to explore the spectacular surroundings.

Among them are the Camino de Nuestra Señora de los Dolores, the Camino de Pilillas, which leads to an old mill, or a route along the cattle trails.

Just 3 km away is the spectacular beech forest of Montejo de la Sierra.

, a restaurant with a charming terrace where traditional dishes from the area are served.

This medieval jewel with the title of town reached its greatest splendor in the fifteenth century.

Located in the Middle Valley of Jarama, it has been declared a Historic Artistic Site due to its considerable monumental heritage, headed by the

one of the best examples of Madrid's Gothic architecture whose construction began at the beginning of the 15th century, the

, a porticoed building with Renaissance characteristics founded by Cardinal Cisneros in 1514 as a grain store, and the

(16th century), an abbey with an outstanding Plateresque floor plan and facade of the chapel.

All of them are located in the

in the center , built in 1802 on the site of the house where Cardinal Cisneros was born.

WHERE TO EAT: Las Cubas

With its more than 500 years of history and cataloged as Villa Real, Navalcarnero, 31 km southwest of Madrid, preserves intact some of its most beautiful and emblematic corners, such as its main square, called

(irregular floor plan, buildings of three levels with arcades and wooden balconies), and the church of

(16th century), in whose interior the altarpiece of the main altar stands out, as well as the royal chapel, in which the marriage between Felipe IV and Mariana took place. from Austria.

Strolling through the streets of the historic center, marked by hermitages and shrines dating from the 17th century, is like taking a trip to the past.

Land and sea market cuisine in

You can snack on the bar or eat portions and a la carte in the dining room and terrace.

Nestled in the Sierra Oeste, 55 km from Madrid, the small municipality was in past times a place of recreation and rest for Philip II.

Its historic center, formed by streets, houses and squares of traditional mountain typology, houses among its artistic heritage

the Church of San Pedro Apóstol

The wonderful natural environment that surrounds it, at the foot of the impressive mountain formations known as Las Machotas, includes a series of quarries, from which the granite with which the Monastery of San Lorenzo de El Escorial was built was extracted.

Several signposted paths leave the town and go up to enclaves such as El Pico del Fraile (with fantastic views of the town and El Escorial), Los Tres Ermitaños, or even La Silla de Felipe II.

Along the way are the chestnut trees of El Contanillo or La Fuente del Rey, authentic botanical jewels with centennial specimens.

It has a nice terrace.