“To establish an occupation regime”: documents of the Russian Ministry of Defense on the service of Ukrainian nationalists to the Third Reich were made public

The website of the Ministry of Defense of the Russian Federation published new documents with information about Ukrainian nationalists who served Nazi Germany, and about the crimes they committed during the Great Patriotic War. The materials released by the Russian Ministry of Defense describe the methods of cooperation between the Nazis and Ukrainian nationalists and the massacres and torture of civilians committed by Bandera. According to historians, the Nazis actively used Ukrainian nationalists to carry out reconnaissance and sabotage work, maintain the occupation regime and organize punitive operations against the civilian population. 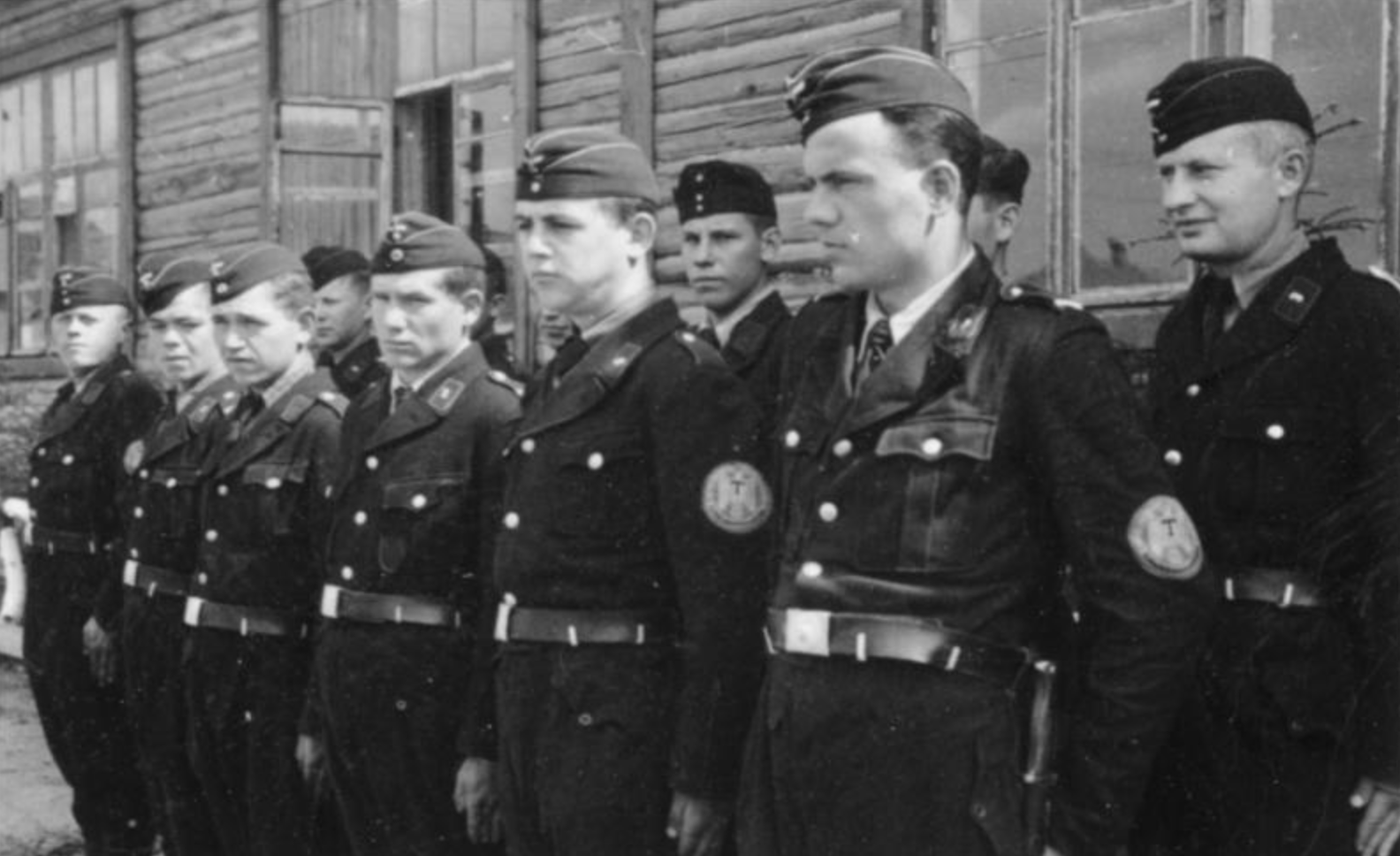 The multimedia section of the RF Ministry of Defense "Archives remember everything..." published a new series of documents about the crimes committed by Ukrainian nationalists during the Great Patriotic War and their work for Nazi Germany.

The explanation to the materials emphasizes that Ukrainian nationalists in the 1940s acted under the dictation of the Nazis, who used Bandera to destroy the population of the USSR.

“Many archival documents describing the atrocities of the German fascists against Soviet citizens note the involvement of Ukrainian nationalists in these crimes,” the Russian Defense Ministry noted.

In the service of the Nazis

According to historians, the work of Ukrainian nationalists for the German special services goes back to the pre-war years.

“In a number of villages on the border with the USSR, teachers of Ukrainian nationalist schools, intensifying chauvinist propaganda, say: “Ukraine must be created now or never.

With the help of the Germans, we all, as one person, must liberate our Ukraine.

We have a lot of troops now.

The Bolsheviks will not survive when Germany, Japan, Italy and France launch an offensive against them, ”says the intelligence report of the Western Special Military District on the activities of Ukrainian nationalists on the territory of the General Government (Poland) in the areas bordering the USSR in 1940.

At the same time, the document emphasizes that Nazi Germany provides support to Ukrainian nationalist organizations "with material feeding of their leaders."

“Long before the start of the war, Ukrainian nationalists became clients of the Abwehr and remained so to the last.

All the major figures of Ukrainian nationalism were somehow connected with the German special services, and sometimes they simply fought in German units, ”Vadim Trukhachev, a teacher at the Department of Foreign Regional Studies and Foreign Policy of the Historical and Archival Institute of the Russian State Humanitarian University, said in an interview with RT.

According to historians, after the German attack on the Soviet Union, the cooperation of Ukrainian nationalists with the Nazis became even more active.

This is confirmed by the documents published by the Ministry of Defense of the Russian Federation.

“The former colonel of the Petliura army, Melnik, and his assistant Bandera, in all cities and regions occupied by the Germans, introduced the organization of the “Ukrainian police and police.”

She collaborated with the Germans in carrying out the mass extermination of Soviet citizens, ”the activities of Ukrainian nationalists during the Great Patriotic War are described in the report of the Political Directorate of the 1st Belorussian Front dated May 31, 1944.

The document provides specific facts of the work of Ukrainian nationalists for Nazi Germany: joint battles against the Red Army, assistance to Nazi intelligence, construction of bridges in the interests of the Wehrmacht.

“By inciting ethnic hatred, inciting Ukrainians against Jews, the Germans and nationalists sought to obscure their robberies and robberies.

The slightest resistance on the part of the inhabitants was immediately suppressed by force, ”says the extraordinary report of the 31st Rifle Corps to the GlavPURKKA (Main Political Directorate of the Soviet Army and Navy) dated August 5, 1941.

As the Nazi troops occupied the Soviet territory, along with the Nazis, Ukrainian nationalist formations also moved deep into the USSR from Western Ukraine.

“After the occupation of the city of Kyiv on September 18, 1941, the Germans immediately began organizing administrative departments.

The city government was established as the highest body of civil administration in the city.

At first, the Ukrainian nationalist Professor Alexander Ogloblin was put at the head of the council ... With the arrival of the Germans in Kyiv, Ukrainian nationalists began to flock from the west, ”the message of the Central Headquarters of the partisan movement of October 10, 1942 emphasizes.

The document notes that Ukrainian nationalists subsequently “worked to incite ethnic hatred, raising the issue of evicting “katsaps” and other nationalities from Ukraine.”

“The German special services used Ukrainian nationalists in a variety of capacities: to carry out reconnaissance and sabotage activities, to carry out punitive operations, to establish an occupation regime and maintain it by terror methods,” Vladimir Simindey, head of research programs at the Historical Memory Foundation, told RT.

According to historians, Ukrainian nationalists who joined the ranks of the Nazi auxiliary police were the perpetrators of the murders of Jews, Poles and participants in other crimes on ethnic grounds.

“In July 1943, in the village of Rygocheno, Koretsky district, Ukrainian nationalists, incited by the Germans, offered the family of Adam Antonovich Voitsekhovsky, a Pole by nationality, to accept the Orthodox faith,” says the act published by the Russian Ministry of Defense on the atrocities of the Nazi invaders dated January 15, 1944 .

But, despite the fact that Voitsekhovsky complied with the requirements of the Ukrainian nationalists, Hitler's accomplices “cut the whole family with knives, partially killed, burned the farm, huts.

The bodies of the victims were thrown into the fire.”

The act of August 23, 1944 tells how Ukrainian nationalists in Poland broke the arms and legs of a priest, after which they killed him with a shot in the mouth.

They forbade burying the priest's body for five days.

According to the report of the military prosecutor of the 61st Army, in the village of Selets, Rivne region, a gang of Ukrainian nationalists who were in the service of the Germans, from September to December 1943, committed brutal reprisals against the local civilian population.

“In total, more than 50 people of Soviet patriots, including women, the elderly and children, were killed and brutally tortured,” the document says.

Trying to hide your crimes

According to historians, the work of Ukrainian nationalists for Nazi Germany continued even after the liberation of the Ukrainian SSR by the Red Army began.

However, at this stage, the Bandera began to hide their collaboration with the Nazis.

“At the beginning of this year, a meeting of Germans and Bandera was held in the village of Mikitichy on the issue of joint struggle against the advancing units of the Red Army and Soviet partisan detachments operating behind enemy lines… Hiding from the Ukrainian population their connection with the German military and civil authorities, the Bandera in fact, they act under the dictation of the Germans, receiving from them weapons, uniforms and other military property for this, ”the memorandum to the commander of the troops of the 1st Ukrainian Front, Marshal of the Soviet Union Georgy Zhukov, dated May 13, 1944, says.

Experts note that later Ukrainian nationalist historians created a myth that the Bandera structures, and in particular the UPA* detachments, allegedly fought “on two fronts”: both against the Red Army and against the Wehrmacht.

According to historians, this is completely untrue.

“German units are not attacked by the UPA… The UPA sends scouts, mostly girls, into areas occupied by the enemy and reports the results to the reconnaissance department of the battle group.

Prisoners of the Red Army, as well as Soviet partisans, are being escorted to the intelligence department for interrogation, ”the order of SS Brigadeführer Brenner emphasizes to the personnel of the 11th SS police regiment, the translation of which was also made public by the Russian Ministry of Defense.

According to Vadim Trukhachev, any allegations about the struggle of the OUN-UPA with the Nazi troops are fake.

“The German archives do not know anything about the fact that Bandera fought with them.

To pass off individual skirmishes, which also happen in a single army, for the fact that Bandera opposed the Germans is nonsense.

In Germany, there is not a single evidence that Ukrainian nationalists fought against them, ”Trukhachev emphasized.

At the same time, as historians note, one of the clearest examples of cooperation between Ukrainian nationalists and the Nazis is the creation of the 14th SS Infantry Division "Galicia".

It was largely staffed by former fighters of the Hitlerite auxiliary police from among the Ukrainian nationalists.

The fate of the division turned out to be inglorious.

In 1944, in the first large-scale clash with the Red Army, it was defeated.

The activities of the SS division "Galicia" are described in the historical form published by the Ministry of Defense, which was compiled by the Main Intelligence Directorate of the General Staff of the Red Army.

The document emphasizes that many Ukrainians wanted to flee from the front, so behind the battle formations of the SS "Galicia" there were "German cavalrymen, ready to prevent Ukrainians from deserting by force of arms."

While liberating the territory of the Ukrainian SSR, Soviet military personnel revealed many facts of the criminal activities of Ukrainian nationalists.

The act of the forensic medical examination dated May 29, 1944, tells how a gang of Ukrainian nationalists, under the guise of partisans, entered the village of Hrytsky, Rivne region, after which they captured and brutally killed four local residents.

One of the murdered women was hung from a tree by her legs after being bullied and strangled, a man was hung on a barn corner beam, the bodies of two more were found on the road.

In the report of the commander of the 43rd reserve rifle division dated March 26, 1945, it is noted that the Bandera gangs were distinguished by good German military training, and German military specialists directly acted in their composition.

“It turned out that the UPA gangs reached a total number of up to 650 people and in most cases consisted of the SS and partly of the Germans ... during the battle, the Bandera teams were given in German and Ukrainian,” the document emphasizes.

This is confirmed by other archival materials published by the Russian Ministry of Defense.

“Many bandits went through the German school, especially the leadership ... This is evidenced by the fact that, along with other trophies, a large number of Field Service charters and a number of other textbooks were captured,” says the report on the operations of the 43rd reserve rifle divisions from October 1944 to March 27, 1945.

However, as historians note, the organizational, methodological and military-technical assistance from the Nazis did not help Bandera.

All UPA gangs in the post-war years were liquidated by Soviet law enforcement agencies with the support of the Red Army.

* Organization of Ukrainian nationalists - "Ukrainian Insurgent Army" (UPA) - a Ukrainian organization recognized as extremist and banned in Russia (decision of the Supreme Court of the Russian Federation of 11/17/2014).