The SLS, NASA's XXL rocket to return to the Moon

The SLS launcher - or Space Launch System - left its hangar for the first time overnight from Thursday to Friday. This rocket, the most powerful in American history of space exploration… 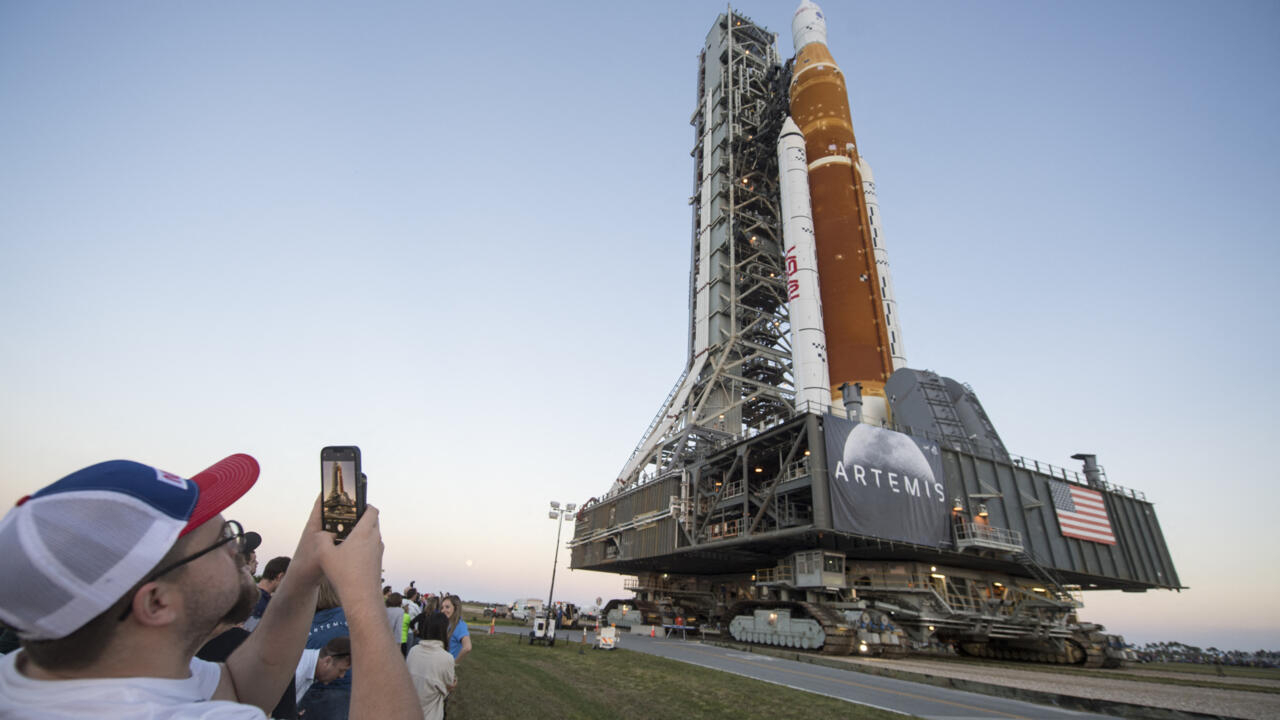 From the top of its almost 100 meters, it embodies the renewal of American space ambitions.

The SLS (Space Launch System) rocket made its first public appearance for testing on the night of Thursday March 17 to Friday March 18, eleven years after the program was launched by NASA.

But above all, it slowly moved, for almost eleven hours, towards the launch pad of the famous 39B shooting complex at the Cape Canaveral space center, from where the last manned missions to the Moon of the Apollo program left, it fifty years ago.

More than 100 meters high to go to the Moon

It is not a coincidence.

SLS is at the heart of the Artemis program, launched by former US President Donald Trump, which should enable the United States to find its way back to the Moon, if possible as early as 2025. "Being present when a new super-launcher sees the day is an extraordinary event that will be remembered," enthused Tom Whitmeyer, a senior NASA official in charge of space exploration systems, interviewed by the BBC.

The ambition of the Space Launch System is immediately guessed by its size.

Simply put, the bigger these rockets are, the further they want to go.

NASA's mythical Saturn V launcher, which allowed Neil Armstrong to fly to the Moon, was 113 meters high, while the final size of the SLS must be 117 meters high (for now only the first version of the rocket, which is 99 meters long, was built).

Launchers like Space X's Falcon 9 or Ariane 5 are just over 50 meters long.

That's enough to reach the International Space Station, which is 408 km from Earth.

But the Moon is ten times further away.

Why is rocket size so important?

"You have to provide enough to support the crew and you need different powers depending on where you want to go", answers François Forget, astrophysicist and specialist in space exploration at the CNRS, contacted by France 24.

And for space rockets, it is a mixture of hydrogen and liquid oxygen.

An assembly which, in more than fifty years of space exploration has proven its effectiveness, but remains very cumbersome.

And if the Space Launch System is also large, it is also a sign that since the era of Saturn V "there has not been a great technological leap in the mode of propulsion", underlines François Forget.

Research is being carried out to try to find alternatives, such as nuclear-powered rockets, but nothing has yet come to fruition.

Work that should make these rockets less expensive.

But before you can make those savings, you would have to spend more to research more.

And the specifications of the SLS demanded to pay attention to the addition.

The launcher program was initiated by former US President Barack Obama shortly after the 2008 financial crisis in a context of seeking savings at all costs.

This is why the SLS was thought of as "a legacy of the American space shuttle [the space vehicle used by NASA between 1981 and 2011] for the sake of economy", explains François Forget.

Dreams of savings that have vanished over the years since the cost of developing the SLS was 30% higher than the initial budget (more than 9 billion dollars instead of 7 billion dollars).

The affiliation with the American space shuttle is visible to the naked eye: it is the two boosters located on each side of the central frame of the rocket.

They are the ones who do most of the heavy lifting of the rocket's initial thrust after liftoff, and help make the Space Launch System the most powerful launch vehicle in NASA's history.

The credo of the new rocket intended to take men to the moon therefore seems to be "change in continuity".

A rule that also applies to the Orion capsule which replaces the famous Apollo module whose images of landing in the Atlantic Ocean in 1969 marked history.

It is aboard this capsule that astronauts who have an appointment with the Moon will go into orbit around this natural satellite of our Earth.

It will be slightly larger than Apollo and will seat four people instead of three, but it uses the same heat shield technology that protected the space module in 1969 when it returned to Earth's atmosphere.

Ironically, the most innovative aspect of the Artemis program to return Americans to the Moon does not come from NASA, but… from Elon Musk.

The American space agency has indeed chosen a modified version of the Starship, the launcher of Space X, to land the astronauts.

And this ship has nothing to do with the small module from which Neil Armstrong came out to take his "small step for man, giant leap for humanity".

A difference in size which should allow, as the flights to the Moon progress, to transport equipment "with a view to eventually establishing a base there", underlines François Forget.

Elon Musk's rocket has another advantage: it can be refueled in space.

Which makes Starship a good candidate for pushing space exploration to Mars.

By working with Elon Musk, NASA therefore hopes one day to be able to take advantage of this technology if, after the Moon, it continues its journey to the red planet.

But in the meantime, NASA will prepare its SLS in stages for its space adventure.

The first flight, in 2022, will not be manned and will be used to check that everything is working properly.

Astronauts will board during the second launch, but they will not yet land on the Moon.

Only on the third flight, scheduled for 2025 at the earliest, will they jump from the Orion capsule to Space X's Starship HLS to land on the moon.

And this time, there will not be only men, since NASA intends to take the opportunity to allow the first woman to set foot on the Moon.