The new rocket of the US Space Agency (NASA) began Thursday its first move towards the launch pad, where it will undergo a series of tests before being sent, if successful, to the moon next summer.The SLS rocket left the assembly building at the Kennedy Space Center in Florida, USA. 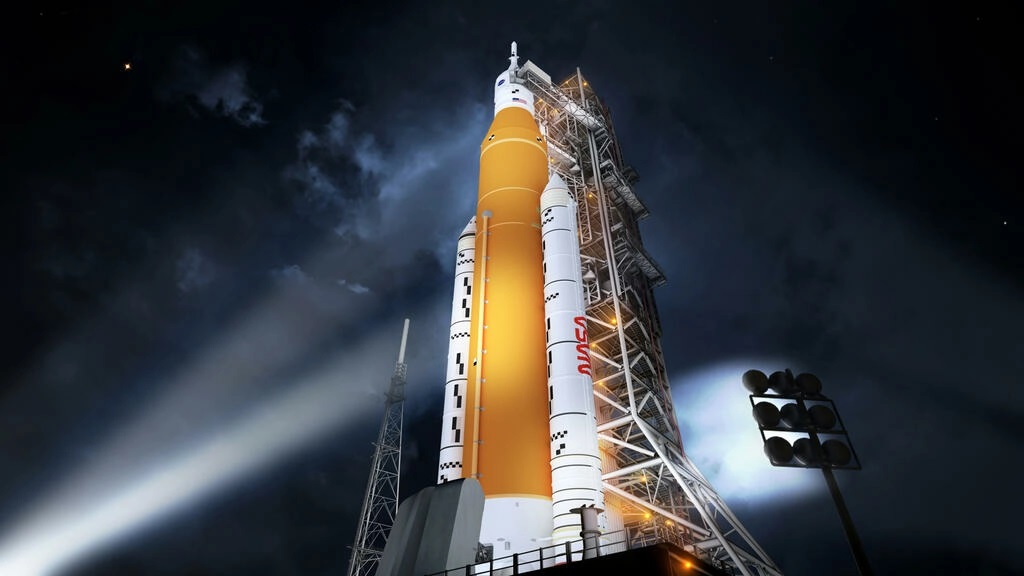 On Thursday, the new NASA rocket began its first move towards the launch pad, where it will undergo a series of tests before being sent, if successful, to the moon next summer.

The SLS rocket left the assembly building at the Kennedy Space Center in Florida at about 17:47 (21.47 GMT) Thursday, on an eleven-hour flight to join the 39B launch pad located some six kilometers from the center.

With the Orion space capsule attached to its head, the SLS rocket is 98 meters long, higher than the Statue of Liberty, but slightly lower than the Saturn 5 rocket that was used to send humans to the moon during the Apollo missions, which reached Its length is 110 meters.

However, the "SLS" will produce 39.1 megatons of pressure, which is 15 percent more than the "Saturn 5", which will make it the most powerful missile in the world today.

"This is a symbol of our country," Senior NASA Administrator Tom Whitmire said this week.

But the cost of this "code" is exorbitant, as launching the first four operations within the "Artemis" program to return to the moon will cost $4.1 billion, according to what Inspector General of the US Space Agency Paul Martin revealed to Congress this month.

Once in the launch area, engineers have about two weeks to run a battery of tests before carrying out a public pre-launch test.

On April 3, the team will fill more than three million liters of coolant fuel into the rocket and conduct a test countdown to each stage until the last ten minutes, without the engines running.

The fuel will then be withdrawn from the rocket to safely test the incomplete launch process.

And "NASA" has set next May, the first approximate date for the launch of the unmanned "Artemis 1" lunar mission, in which the "SLS" rocket and the "Orion" capsule will meet for the first time.

The "SLS" will initially put "Orion" in low Earth orbit, before carrying out the process of "entry into lunar transition" thanks to its upper layer.

This process is necessary to send Orion more than 450,000 km from Earth and nearly 64,000 km beyond the Moon, far beyond what any other manned spacecraft can reach.

During its three-week mission, Orion will deploy ten cubesats, the size of a shoebox, that will collect information about deep space.

Thanks to thrusters provided by the European Space Agency, the capsule will travel toward the dark side of the moon before returning to Earth.

It will land on waters in the Pacific Ocean off the coast of California.

It will have to wait until the launch of the "Artemis 2" mission, expected in 2024, to record the first manned test flight.

The capsule will then orbit the moon without landing on its surface, while the expected "Artemis 3" mission in 2025 at the earliest, will carry the first woman and first person of color to set foot on the moon at the south pole of this space object.

NASA seeks to test on the moon some of the technologies that it intends to use during its future space missions towards Mars in the thirties of this century.