"People began to think about vacations in orbit": how space tourism is developing in Russia

The expedition of the Japanese billionaire Yusaku Maezawa and his assistant Yozo Hirano to the ISS did more than just signify the resumption of space tourism in Russia. According to experts, manned astronautics will adapt to non-professional travelers outside the Earth, expanding both the number of passenger seats and the flight programs themselves. Moreover, if some pay an impressive amount for this, then others in the future will be lucky enough to visit space for free. 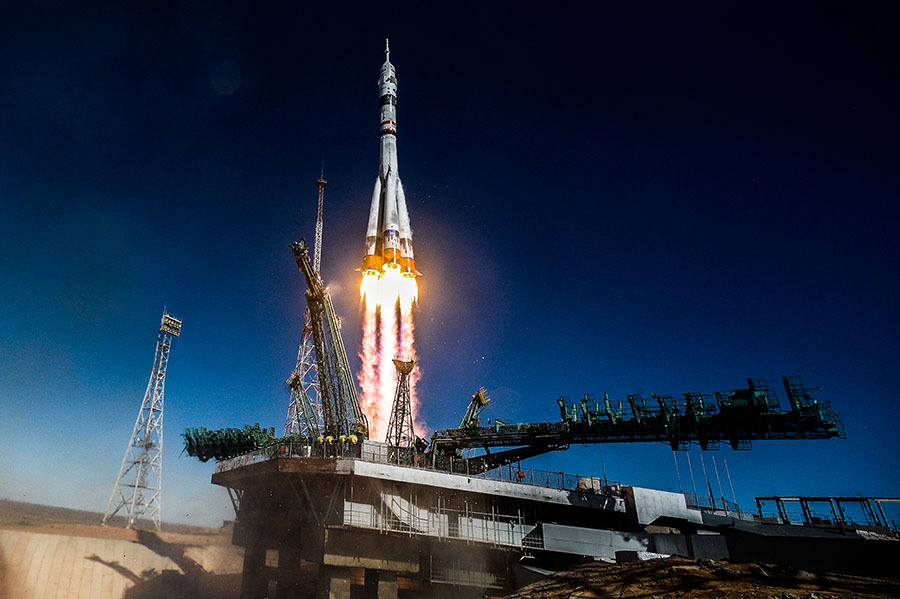 On December 20, the crew of the Soyuz MS-20 spacecraft returned to Earth. Russian cosmonaut Alexander Misurkin, tourist - Japanese billionaire Yusaku Maezawa - and his assistant Yozo Hirano spent almost 12 days on the ISS. The previous space tourist, the founder of Cirque du Soleil, Guy Laliberté, was sent by Russia to the ISS back in 2009. Although before that, starting from 2001, such flights on Russian ships were carried out almost every year: in eight years, seven people were brought to the ISS and back, moreover, the founder of Intentional Software, Charles Simonyi, twice.

The reason for such a long hiatus in the field of space tourism is the termination of the American NASA launches of the reusable Space Shuttle.

The United States bought out places on the Russian Soyuz that could be sold to tourists for its astronauts.

Last year, for the first time since 2011, the Americans sent astronauts on their own ship.

“After the American manned spacecraft began to fly, the obligation to deliver foreign astronauts to the ISS was lifted from Russia.

We got the opportunity to send crews of three Russian cosmonauts to the station.

The first such crew of professional cosmonauts will fly to the ISS in the spring, ”said Dmitry Rogozin, General Director of Roscosmos on December 16.

A little earlier, during a press conference at Baikonur after the launch of the Soyuz MS-20 mission, Rogozin announced the expansion of tourist programs.

First, tourists can be given part of the vacated seats on ships going to the ISS.

Secondly, shorter and less expensive trips without docking with the orbital station are planned.

The head of Roscosmos added that after 2030, flights around the moon and long-distance expeditions will be offered.

He also spoke about plans to create a Russian orbital service station.

It is supposed to send to it on a non-commercial basis, including non-professional astronauts - research scientists, specialists in their fields to conduct experiments.

It also provides for a separate commercial, tourist module.

In the 2012 French film "Married for 2 Days" the main character comes to Moscow.

Frost, hats with earflaps, vodka, squatting dances - as conceived by the authors, this is what Russia looks like.

There is also a touch: Russian extreme entertainment.

But this is not a fight with a bear, but an airplane flight in zero gravity.

“We were the first and remain practically the only agency offering space tourism. The beginning can be counted from the end of 1998, '' Sergei Kostenko, head of the Russian representative office of Space Adventures, told RT. - In the United States in those years, weightless flights by airplane were organized only for training astronauts, there was no commercial service. And in Russia we have already provided this. Then Richard Garriott (an American computer game developer -

. He and a friend came here, flew in zero gravity. Since this all started. By the way, Garriott also became a space tourist in 2008 - he flew to the ISS ”.

Today, an almost two-hour flight on the Il-76 MDK from the Chkalovsky airfield, during which the board passes the zero gravity mode ten times (25-28 seconds each), is offered to everyone for 280 thousand rubles.

According to Kostenko, the development of technologies is unlikely to significantly reduce the cost of this attraction in the coming years, since the main costs here fall on fuel.

- These are flights to the ISS on Russian Soyuz.

There was a short four-day tourist expedition aboard the Dragon ship from Elon Musk's Space X. And the so-called suborbital flights from Richard Branson's Virgin Galactic and Jeff Bezos's Blue Origin were implemented.

But this is not exactly space travel - just a vertical take-off of 80-100 km.

15 minutes of flight, of which two minutes in zero gravity.

You can have time to look at the planet from a height and take pictures. "

Potential guests of the ISS are billionaires from IT

The first space tourist, American multimillionaire Dennis Tito, who flew on the Soyuz to the ISS in 2001, paid $ 20 million for this. Neither the organizer of the Space Adventures trip, nor Roskosmos will name the exact amount of the flight for Yusaku Maezawa and his assistant. Experts gave an estimate in the corridor of $ 50-100 million. NASA reported that the last time it paid for the delivery of its astronaut to the ISS was $ 80 million.

“The portrait of our client is changing,” says Sergei Kostenko.

- Earlier it was such an average Dennis Tito.

A person with a fortune of $ 500 million. An adult who has achieved everything, tried a lot of things.

Who had both boats and planes.

In general, everything was.

A person who was looking for something new, sharp.

In addition to Mark Shuttleworth, who flew off at the age of 28 and so realized his childhood dream, they were all elderly people.

Now we increasingly come into contact with potential clients who are in their 30s.

A new generation that came from IT or crypto business. "

As the general director of Glavkosmos JSC Dmitry Loskutov told RT, the price of each trip is calculated individually. “It includes the cost of the Soyuz-2.1a launch vehicle, the Soyuz MS manned transport vehicle, medical examination by specialists of the Institute of Biomedical Problems of the Russian Academy of Sciences before and after the flight, preparation for flight and post-flight rehabilitation on the basis of the Gagarin Cosmonaut Training Center , the work of astronauts with tourists on board the station. Individual equipment: spacesuits, cradles, change of clothes, food, etc. Plus the possible wishes of space travelers, for example, delivery of individual food to orbit, specific equipment for conducting scientific experiments or video filming, ”explained Loskutov.

According to Sergei Kostenko, the number of applications from new space tourists will grow, but with the current price tag, there will definitely not be a queue for flights to the ISS.

“Of course, they buy both yachts and paintings for $ 100 million, but this is an investment, they stay with you, and this is pure entertainment,” comments Kostenko.

- Russia is going to build the reusable ship "Eagle".

Due to reusable use, cost reduction is possible.

As technology advances, the price tag will drop.

But this is in the future not a year or two, but decades.

For now, in any case, the number of tourists per year will be measured in units.

According to my feelings, the turning point will occur when the price tag drops to $ 10 million — people with a fortune of $ 300-400 million can already afford this. And the bill will go to dozens every year. "

In the meantime, Kostenko announced a new option, for which a client is now being selected: an exit from the ISS into outer space.

Non-professional astronauts have never done this.

There is no price competition yet.

“The cost of one Dragon seat is like at Soyuz, $ 50 million,” comments Mikhail Kotov.

And there preparation is not required, just instructed and go ahead.

But this is not exactly space either. "

And a comfortable toilet

Billionaire Yusaku Maezawa has announced that he will complete the "Program 100 cases" on the ISS - according to the instructions of subscribers of his pages in social networks.

He uploaded videos with a progress report on YouTube.

Apparently, the Japanese fans asked him quite common tasks: opening canned food, brushing his teeth, washing his hair - almost all of his videos dealt with demonstrating everyday life in conditions of zero gravity and the limited space of the station.

At the prelaunch press conference, when asked what he would do first on the ISS, Maezawa replied: “I'm going to the toilet.

Those who built a rocket out of barrels in the yard in their childhood imagined life in orbit as something romantic.

Household trifles did not figure in fantasies.

But as it turned out, it is they who are directly related to space exploration.

The development of tourism in navigation and aviation has adapted ships and airplanes for ordinary people.

As comfort has increased and both the service process and control systems have been simplified, the number of staff has decreased in favor of passengers.

Later, some of the solutions found and proven technologies were implemented already for professional - military or scientific tasks.

For example, the same toilet on strategic bombers that are in the air for 12 hours.

Now similar processes are going on in space. “Space tourists are very busy people and it is very difficult for them to allocate six months or almost a year from their busy business schedule, even if they have the desire and opportunity to pay for their flight into space,” said Dmitry Loskutov. “Thanks to the programs developed at the CPC, we today confidently offer our clients training, which takes about four months. Flights to the ISS using short and ultrashort schemes have already been completed. It takes a few hours to get to the station, while earlier it took several days. This affects the convenience and comfort - the adaptation of people to space conditions is no longer in a cramped spacecraft, but in more comfortable conditions of the orbital station. By the way, the American ships Crew Dragon do not fly in short circuits yet ”.

For the sake of the opportunity to take an extra passenger into orbit, changes were made to the control system of the spacecraft - in the three-seater Soyuz MS it is designed for one person.

In the past, the crew commander was assisted by a flight engineer.

Actress Yulia Peresild and director Klim Shipenko are considered not tourists, but rather business travelers.

But in any case, unprofessional astronauts.

Their flight to the Soyuz MS-19 was the first when two of the three crew members were passengers.

The next flight with Japanese tourists on the Soyuz MS-20 followed the same scheme.

Thus, an increase in the comfort of flights and stay in orbit for ordinary people is already preparing a technological base for the exploration of deep space.

Everyday little things like a comfortable toilet or a bed are of no small importance here.

“Today people are already seriously asking us why there are still no orbital hotels and recreational flights around the Moon,” notes Loskutov.

“On the one hand, this suggests that people continue to strive to space, and on the other, that space is no longer something out of the ordinary, that it has become so close to people that they think about vacations in orbit.”