Flame of Victory: what role did the flamethrower units of the Red Army play in the fight against the Wehrmacht

On December 9, 1941, the State Defense Committee of the Soviet Union decided to form additional flamethrower companies in the Red Army. This was preceded by the feat of the 26th separate company near Moscow, which was able to deliver a powerful blow to the infantry and tanks of the Wehrmacht. Later, Soviet flamethrower units loudly declared themselves in the battle for Stalingrad. The flamethrower units of the Red Army received a truly widespread use during the period of battles for cities, operating in small assault groups. According to experts, these soldiers performed extremely dangerous, but very important work to destroy the long-term firing points of the Nazis. 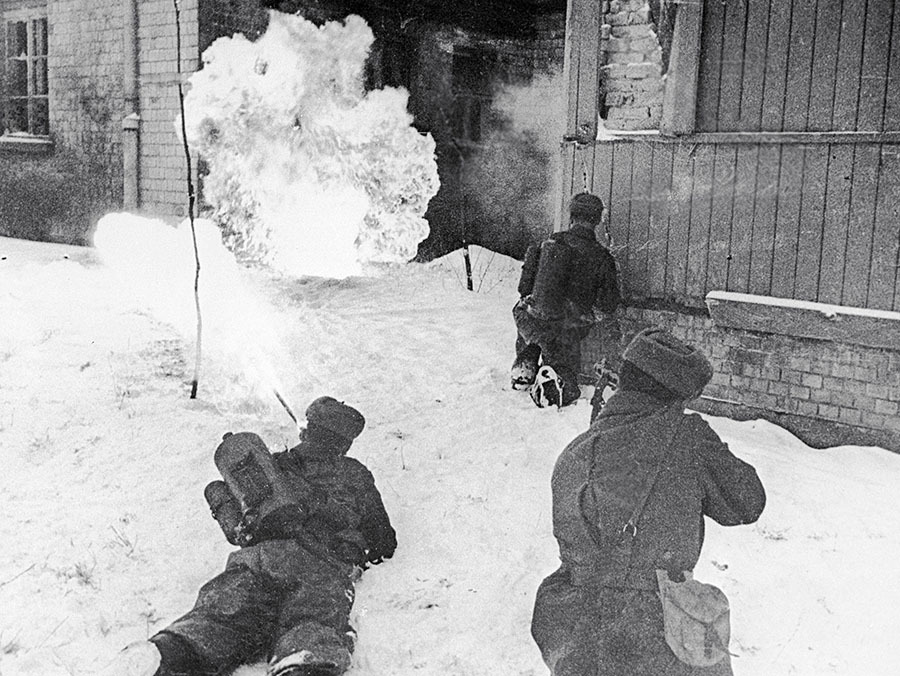 80 years ago, the State Defense Committee (GKO) of the USSR adopted a resolution "On the formation of flamethrower companies" in the Workers 'and Peasants' Red Army (RKKA).

By December 25, in addition to the existing ones, 30 new units and a reserve flamethrower battalion were created.

In January 1942, a significant change in the staffing of the flamethrower units of the Red Army began.

In particular, animal-drawn transport began to be actively replaced by automobile transport, which naturally increased the maneuverability and marching capabilities of the units.

By April 1942, 93 flamethrower companies were operating in the structure of the Red Army, and from the summer of 1943, flamethrower battalions began to be created on their basis.

The GKO decision on the formation of new units was preceded by the feat of the 26th separate Red Banner flamethrower company in the battle for Moscow.

The company commander was a recent graduate of the Kalinin Military Chemical School in 1940, Lieutenant Mikhail Sabetsky.

Initially, the formation was in reserve, but then it was sent to the front, where it took up positions in the Odintsovo district of the Moscow region.

The 1st platoon, under the command of Lieutenant Ivan Shvager, is located on the southwestern outskirts of the village of Dyutkovo.

The 2nd platoon, led by Lieutenant Ivan Shvets, also settled nearby - his detachment was sent to the anti-tank area near the village of Akulovo.

His servicemen were in no hurry to attack the advancing Germans.

They allowed the enemy 50-60 m to the positions, and then fired a "volley" of fire mixtures and began to fire at the Nazis with rifles and machine guns.

Having suffered losses, the enemy infantry retreated and no longer tried to break through in this direction.

At about the same time, the 2nd platoon had to fight the Wehrmacht tanks, which broke into the depths of the defense of the 32nd rifle division of the Red Army north of Akulov.

The flamethrowers managed to set fire to three enemy tanks, which were subsequently completely burned out.

The rest of the German cars tried to find a way around, but were also attacked by the Red Army.

In total, the 26th flamethrower company and servicemen of other formations of the Red Army were able to destroy 35 Nazi tanks in the Akulov area, preventing them from breaking through to the Minsk highway.

For courage and heroism shown in battles with the enemy, 15 soldiers and unit commanders were awarded orders.

Having received a message of success near the village of Akulovo, Supreme Commander-in-Chief Joseph Stalin summoned Colonel Shalkov, chief of the chemical troops of the Western Front, Colonel Bregadze, head of the chemical department of the 5th Army, and Lieutenant Shvets to a meeting in the Kremlin.

On December 6, 1941, the Soviet leader had a 20-minute conversation with them.

According to historians, Stalin was really impressed by the feat of the 26th company in the Odintsovo region and therefore decided to increase the number of flamethrower units in the Red Army.

“Flamethrowers in the Red Army were long before the Great Patriotic War, such weapons appeared in the First World War.

In 1941, the Soviet troops had flamethrower units, of course.

The GKO decree referred to the formation of a larger number of flamethrower companies, which showed themselves well in battles with the Germans, "military historian Boris Yulin explained in an interview with RT.

In turn, in a commentary to RT, the deputy director of the Museum of Russian Military History, Vadim Antonov, said that the GKO decree of December 9, 1941 was aimed at expanding the use of ampoule-throwers - a type of capsule flamethrower weapon.

At the beginning of World War II, the arsenal of the Ground Forces of the Red Army included a 125-mm gun mounted on a wheeled carriage.

It fired a glass or tin ampoule with a self-igniting mixture.

The range of use was 250-500 m, ammunition was loaded through the barrel.

The calculation of the ampoule gun consisted of three people: a gunner, a loader and a carrier of shells.

In total, Soviet industry produced just over 2 thousand units of such weapons.

“Ampoule guns were considered primarily as a means of fighting German tanks and armored vehicles, but in the end it turned out that this was not a very effective type of weapon.

But knapsack flamethrowers were rapidly developed.

Assault units were supplied with them.

Such formations showed high efficiency, for example, during the defense of Stalingrad, and then during the storming of cities that were liberated by the Red Army in 1943-1945, "Antonov said.

It is known that by the beginning of the Great Patriotic War, the Red Army was armed with tanks with flamethrower installations on the towers, the FOG-1 high-explosive flamethrower (disposable) and the ROKS-2 knapsack complex, designed by Viktor Klyuev and Mikhail Sergeev.

“The Red Army had chemical tanks, that is, tracked vehicles with flamethrower guns.

Most often they were mounted on the T-26 and less often on the T-34.

But the chemical tanks suffered heavy losses in the summer of 1941.

This type of equipment was also produced during the war, but mostly Soviet troops used other types of flamethrower weapons, ”Antonov says.

In particular, with the help of FOG-1, which was successfully used by the soldiers of the 26th company, the Red Army soldiers organized the so-called "flamethrower bushes" to the enemy.

They were installed at a distance of 100-200 m from each other along the front and in depth.

This order of battle was an ordinary rifle trench, a few meters from which 58 flamethrowers were placed in the direction of the expected movement of enemy infantry and armored vehicles.

Also, the soldiers of the Red Army deployed their guns towards the neighboring "flamethrower bushes" and to the rear, thus forming a continuous field of fire.

In addition, Soviet soldiers sometimes created a solid barrage of fire in front of the enemy.

For example, this tactic was used just under Akulovo.

On December 14, 1941, the Pravda newspaper wrote about this with reference to the commander of the 5th Army, Lieutenant General of Artillery Leonid Govorov.

“A barrier of hay, straw, brushwood and other combustible materials with a length of half a kilometer was created on the way of the German tanks.

They set it on fire: a continuous barrage of fire was formed, the flame up to 2.5 meters high raged for two hours, ”said Govorov.

According to experts, in battles for cities, high-explosive flamethrowers were not used so often compared to backpack-type weapons, which were more compact, lightweight and mobile, but noticeably inferior in the range of fire damage.

High-explosive flamethrowers were widely used by the Red Army in the Berlin offensive due to the fact that the enemy was massively armed with faust cartridges, fired dense rifle-machine-gun and sniper fire, preventing the passage of Soviet tanks and artillery.

The feat of the soldiers of the 8th separate flamethrower battalion, who, during the assault on the German capital, ensured the capture of the Oberbaumbrücke bridge on the Spree River, breaking the enemy's resistance with their decisive actions, is known.

After the capture of this infrastructure facility, flamethrowers organized its defense.

For courage and heroism in the performance of these tasks, by decree of the Presidium of the Supreme Soviet of the USSR, the commander of a platoon of high-explosive flamethrowers, Lieutenant Vladimir Myasnikov, was awarded the title of Hero of the Soviet Union.

Fyodor Badin, a fighter of this unit, also received a Gold Star.

According to Vadim Antonov, flamethrowers of the Red Army often risked their lives, as they operated at a close distance from enemy positions.

However, their dangerous work made a great contribution to the success of the storming of the cities liberated by the Red Army.

“The specificity of the flamethrower during the Second World War was that it was more of a melee weapon due to its limited firing range.

As a rule, flamethrowers operated in small groups and carried out assault missions in cities.

Most often, they were required to destroy long-term firing points of the enemy, ”explained Antonov.

Despite the fact that the flamethrowers of the Red Army first loudly declared themselves in the battle for Moscow, these units were much more adapted for offensive actions, Boris Yulin emphasized.

As the expert noted, in addition to the high efficiency of destruction, the flamethrower units of the Red Army had a powerful demoralizing effect on the soldiers of the Wehrmacht.

“Flamethrowers are an offensive weapon for breaking through fortified enemy positions.

During the Great Patriotic War, there was often no other more effective means of smoking the Germans out of reinforced concrete structures and fortified buildings.

But Soviet flamethrowers not only destroyed the invaders.

They often caused horror, forced the enemy to retreat, ”summed up Yulin.