This is the Food Hall of Galería Canalejas: luxury and haute cuisine two steps from Puerta del Sol

We could be in New York or London if Mariah Carey and her All I Want for Christmas Is You were heard in the background, which for a reason has already been declared the Christmas campaign. But... 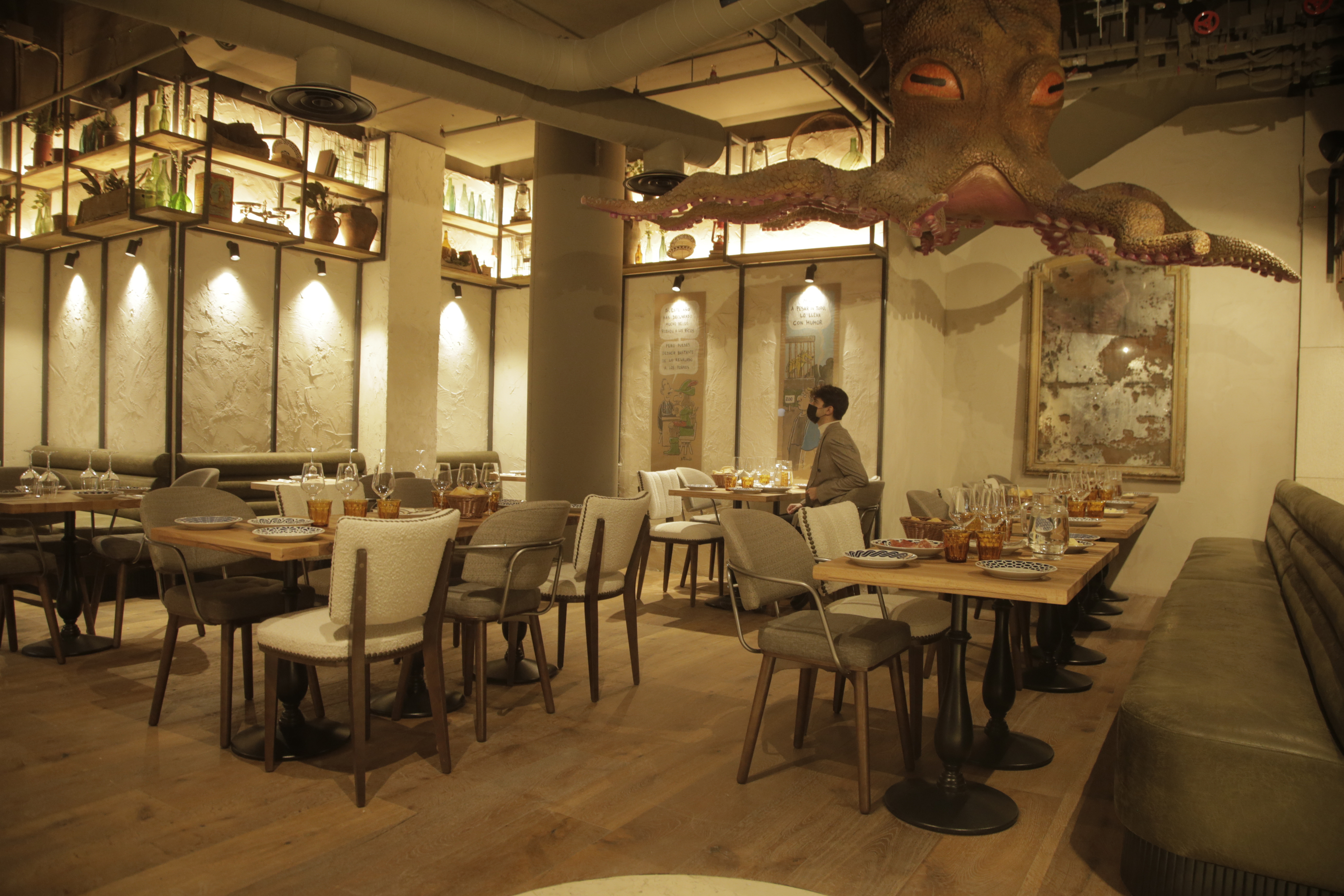 All I Want for Christmas Is Yo

were heard in the background

, which for a reason has already been

We are in the capital, close to Puerta de Sol and in the exclusive

The project, which brings together seven historic buildings in the capital, all rehabilitated and recovered to become benchmarks for avant-garde leisure and tourism, is completing stages.

After seven years of work, in 2020 the Four Seasons Madrid hotel was inaugurated;

A few days ago another great one of luxury, the Cartier jewelry ... And today, December 1, the Food Hall of Canalejas Gallery opens its doors, called to become a

and meeting point for locals, nationals and tourists in the also emblematic Alcala, 12.

And we have gone there to witness the last preparations for this space of more than 4,000 square meters that houses 13 restaurants of different styles and nationalities, whose area is already known by many as the

. The proposal ranges from Michelin-starred chefs to

, through country cuisine dining rooms, in a traditional or updated key, and establishments where delicatessens are the stars.

What is this Canalejas Gallery like, which totals 15,000 square meters in

(the top two, dedicated to the

, with large fashion houses and high jewelry that will finish arriving next spring, and the underground one for gastronomy)?

The less, shocking, sensation that increases when entering Food Hall, where

in the shape of a helix. As in the

, which seems to embrace her. The name of the space of

who at the age of 28 obtained a

from the Red Guide and who today officiates at

based on roots and territory- is also the year of his birth "a statement of intentions, of a lifetime dedicated to cooking, "he says.

Rubén, who shies away from labels, here remains faithful to his philosophy of spreading a land and a gastronomic culture 2with the usual flavor but cooked like never before. "He has the

,« hand in hand with our kitchen team », and the tables designed «to share» snacks taught by the chef, such as the revolcona with crispy bacon and smoked egg yolk and the royal salad with caviar (average price: 50 euros). Everything, with cocktails and "wines with soul, a lot of soul and selected from

, where the grill and an informal offer with "haute cuisine burgers" reign (average price: 35-55 euros). They will also serve breakfast and it will have a terrace. The second, in the subway,

, a Mexican restaurant but with a Japanese philosophy "when it comes to interpreting the product: minimal manipulation, small bites and taming spicy, acid, insects ... So that the main product predominates", points out the chef . For example, a

(average price: 55-65 euros) and private club for members, a format with which Marmól has worked for years at Yugo The Bunker.

We continue the tour in

s, the iconic Madrid rice bar where there is no shortage of a great rice menu (from mixed paella to black rice with cuttlefish, as well as up to twenty different elaborations featuring cereal), seafood, fish and meats.

In addition, it has a cocktail area (average price: 60 euros with rice and wine).

From a classic space to another warrior:

, where the Venezuelan F

combines Japanese cuisine with the flavors and techniques of half the world.

We continue in an international key with

, the latest adventure of the China Crown Group starring these artisan snacks of

In a European key,

- from the Davant group - and his "refined and contemporary" Italian cuisine, whose advisor is the well-known chef Jesús Almagro, and the favorite oysters of great creators brought from France by

We return to the homeland and to

, the updated traditional Galician gastronomy brought to the 21st century.

And, as Food Hall is above all a

, a must-see are the

, specialists in Iberian products, sausages and cheeses, which, for the first time, come from the hand of

, a renowned workshop in Tarancón (Cuenca), and the Italian ice creams from

But there is more: another 20 corner-type spaces grouped in

and to enjoy concepts such as signature sandwiches (John Barrita), with avocado as a common thread (Avocados) or vegan proposals (Huma), tapas

(La Carmela) ... And, if it comes down to it, live music, who knows, maybe with Mariah Carey.

Gastronomy13 restaurants to travel the world without leaving Madrid