"The beginning of a fundamental turning point": how the Soviet counteroffensive near Moscow changed the course of World War II

80 years ago, a large-scale Soviet counteroffensive began near Moscow. Despite the fact that the Red Army did not have either a quantitative or a technical advantage, by January 7, 1942, it managed to push the enemy back 100-250 km from the capital of the USSR, eliminating the immediate threat to Moscow and creating the preconditions for the continuation of the offensive. According to historians, the success of the Soviet command was achieved thanks to the skillful planning of operations, the courage of Soviet soldiers and the moral and psychological factor. According to experts, the Red Army men were inspired by the fact that the leadership of the USSR, even in the most difficult moments of the Battle of Moscow, did not leave the city. 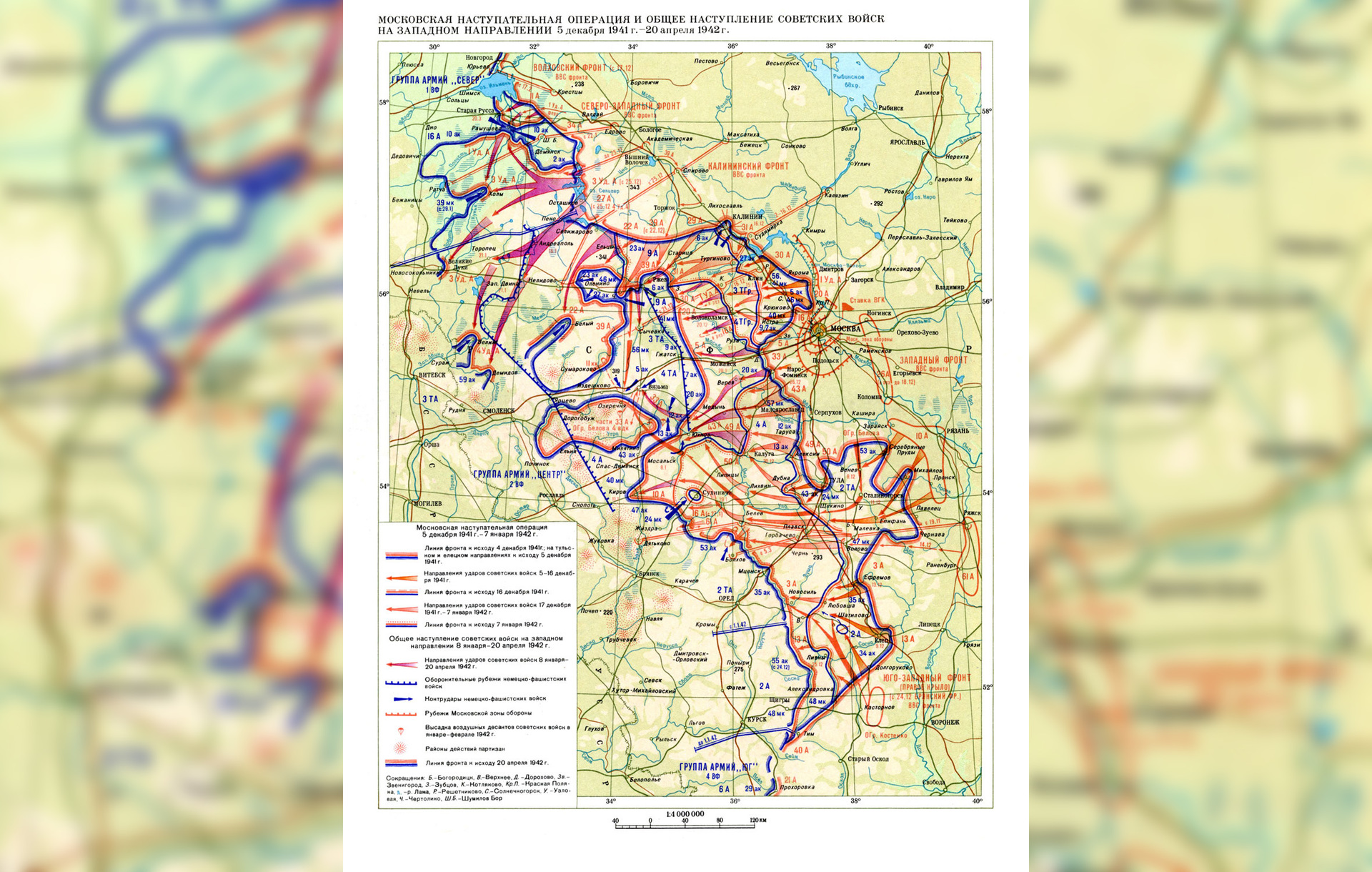 On December 5, 1941, Soviet troops launched a large-scale counteroffensive near Moscow.

According to historians, this was the first strategic offensive operation of the Red Army in the fight against Nazism on this scale.

The success of the Soviet troops, according to experts, was the beginning of a radical turning point not only in the Great Patriotic War, but in World War II as a whole.

As historians note, in late autumn - early winter 1941, the situation near Moscow for the Soviet troops was quite difficult.

In the Moscow direction, the Wehrmacht concentrated up to 40% of divisions, 70% of tanks, 40% of artillery and more than 30% of the aircraft of the entire army.

The first plans for a counteroffensive in the Moscow region appeared in the Soviet command as early as November 1941, but they were not implemented immediately due to the active actions of the enemy. All possible reserves of the Red Army were hastily deployed to the capital. Only for the transportation of the 10th, 26th and 61st reserve armies and formations intended to strengthen the right wing of the Western Front, the Soviet leadership had to find about 60 thousand cars within ten days.

The final plan for the counter-offensive was developed in an extremely limited time. On November 29, the commander of the Western Front, General of the Army Georgy Zhukov, reporting on the combat situation, asked the Supreme Commander-in-Chief Joseph Stalin to give the Soviet troops an order to launch a counteroffensive. He motivated his proposal by the exhaustion of German troops and the need to defeat them until the moment when they can receive large reserves. The rate supported the proposal. The very next day, the military councils of the fronts drew up specific plans for operations. On December 2, the headquarters of the Western Front issued a directive to launch a counteroffensive. On the same day, a combat order for a counteroffensive was signed by the commander of the Kalinin Front. And two days later, their example was followed by the headquarters of the Southwestern Front.

“The timing of the strike was chosen with the genius of the military leader Zhukov.

At the same time, the vulnerabilities of the Nazi troops were very well identified, "Mikhail Myagkov, scientific director of the Russian Military Historical Society, told RT.

The Nazis did not believe in the prospect of a Soviet offensive.

The chief of the General Staff of the German ground forces, Colonel-General Franz Halder and the commander of Army Group Center, Fedor von Bock, announced in early December that the Red Army did not have the strength to organize an offensive operation near Moscow.

Although the Nazis saw that the war was not developing according to the scenario they had planned, they still hoped for the imminent fall of the Soviet capital.

On December 5-8, 1941, the Red Army launched a large-scale offensive against parts of the Wehrmacht.

At the same time, according to the specialist-historian of the Victory Museum Alexander Mikhailov, the Soviet troops had neither a quantitative nor a technical advantage near Moscow.

The forces of the Red Army in the Moscow region numbered, according to various sources, from 1.1 to 1.3 million people, about 7.6 thousand guns and mortars, up to 800 tanks.

They were opposed by the Hitlerite group, the number of which, according to various estimates, reached 1.7-2 million people, 13.5 thousand guns and mortars, almost 1.2 thousand tanks.

“On the axes of the main attack, the Soviet troops were able to concentrate powerful groupings of troops.

The surprise effect of the offensive also played an important role, coupled with the falling morale of the German soldiers, ”stressed Alexander Mikhailov.

In addition, the Soviet command insisted that the forces of the Red Army, instead of frontal attacks, seep between the Nazi units, slicing through their positions and trashing the units that were surrounded.

For a long time, the Soviet leadership of those years did not publicly disclose the details of the offensive near Moscow.

Only on December 13 was it officially announced on the radio that the German offensive on Moscow had failed.

According to experts, this message caused a strong morale among Soviet citizens.

On December 15, the Red Army drove the Nazis out of Klin, and on December 16, Kalinin (now Tver) was liberated from the Nazi invaders.

At the same time, the Nazis managed to withdraw not all of their troops from the city, some of them were blocked and destroyed by the Red Army.

Although the Nazi leadership tried to attribute the failures of their troops near Moscow to severe frosts, historians emphasize the complete inconsistency of such statements, since the sharp drop in temperature was short-lived.

On the contrary, the heavy snow that fell in the future made it difficult for the Soviet soldiers to advance.

In the second half of December, the troops of the Kalinin Front defeated the Wehrmacht forces in the Staritsa area and launched an offensive in the Rzhev direction.

At the same time, the Soviet command insisted that the Red Army units pursue the retreating Nazis, preventing them from breaking away.

By January 7, 1942, the position of the Nazi Army Group Center was critical.

The Nazis were thrown back in various sectors of the front near Moscow by 100-250 km, having lost about 300 thousand personnel.

The total losses of Soviet troops over the same period of time and taking into account the offensive nature of hostilities amounted to about 370 thousand people.

End of the Battle of Moscow

On January 8-10, 1942, a new large-scale offensive of the Soviet troops began, in which the forces of the Kalinin, North-Western and Western fronts took part.

Experts note that the plans of the Soviet command at the beginning of 1942, taking into account the general balance of forces between the USSR and Germany, were still too ambitious, and they could not be fully implemented.

In order to somehow save the situation, Adolf Hitler was forced to hastily transfer to the Soviet-German front about 890 thousand soldiers and 18 echelons with weapons and military equipment from Western and South-Eastern Europe.

Most of them were aimed at strengthening Army Group Center.

At the end of winter - early spring of 1942, Soviet troops continued to push the enemy, but they failed to achieve decisive success, despite many days of bloody battles, in any direction.

At this stage, the achievements were mostly local in nature.

In April, the situation became even more complicated due to floods and muddy roads.

Stalin was forced to accept Zhukov's proposal to end the offensive.

Most historians associate the end of the Battle of Moscow with this date.

In total, from December 5 to April 20, Soviet troops liberated 13,171 settlements on the territory of the USSR from the Nazi occupiers.

Since September 30, 1941 (since the beginning of the Battle of Moscow as a whole), more than 7 million people and more than 33 thousand guns were involved in hostilities in the area of ​​the capital of the USSR on both sides.

In the battles for the Soviet capital, the Wehrmacht lost five times more people than in all military campaigns that preceded the attack on the USSR.

According to Mikhail Myagkov, the Battle of Moscow radically changed the entire situation on the Soviet-German front and finally thwarted Hitler's plan for a "lightning war" against the USSR.

"The Nazi army was now forced to wage a protracted war to exhaust the enemy, and the USSR got time to accumulate reserves, so that the enterprises evacuated to the east of the country were put into operation, for additional mobilization of the population and for the final formation of the anti-Hitler coalition," the expert emphasized.

Historians note that the preservation of Moscow played not only moral but also great logistical significance for the USSR.

The loss of the Moscow transport hub could lead to the collapse of all military traffic in the Soviet Union.

“But still, the most important thing is that the Soviet people were convinced: the enemy can be beaten!

In the rear of the enemy, the partisan movement intensified, and abroad, Western governments were convinced that the USSR was a powerful force, ”said Myagkov.

According to the executive secretary of the Association of Historians of the Union State Dmitry Surzhik, the moral and psychological factor played a huge role in the success of the Soviet counteroffensive near Moscow.

“People saw that Stalin was not at a loss and remained in Moscow.

This was reinforced at the same time by the belief in victory and the realization that there was nowhere to retreat.

The country mobilized all its forces in order to repulse the enemy.

But the German military increasingly expressed their dissatisfaction with Hitler's actions.

The morale of the Nazis was falling.

Moreover, the victory near Moscow was of tremendous importance not only for the USSR, but also for the whole world, united to fight against Nazism, "the expert emphasized.

As Mikhail Myagkov noted, the Moscow battle was "the beginning of a radical turning point, both in the Great Patriotic War and in World War II as a whole."

But without Moscow and Stalingrad there would not have been.

The basis for the future great Victory was forged just outside Moscow, ”summed up Myagkov.