From medicine to changing production chains: a Russian scientist on the prospects of 3D printing

Using materials from other planets for 3D printing is an important step in the development of space production. This was stated in an interview with RT by Vladimir Kuznetsov, associate professor of the Department of Materials Science of Non-Ferrous Metals at NUST MISiS, head of the digital production laboratory at FabLab. So the scientist commented on the recent statement of the European Space Agency about plans to use lunar metals for 3D printing. He noted that 3D-printed parts are already being sent into space. The scientist also spoke about the types of 3D bioprinting and the properties of materials created using additive technologies. According to him, the most important perspective for the development of 3D printing is its use in personal production. 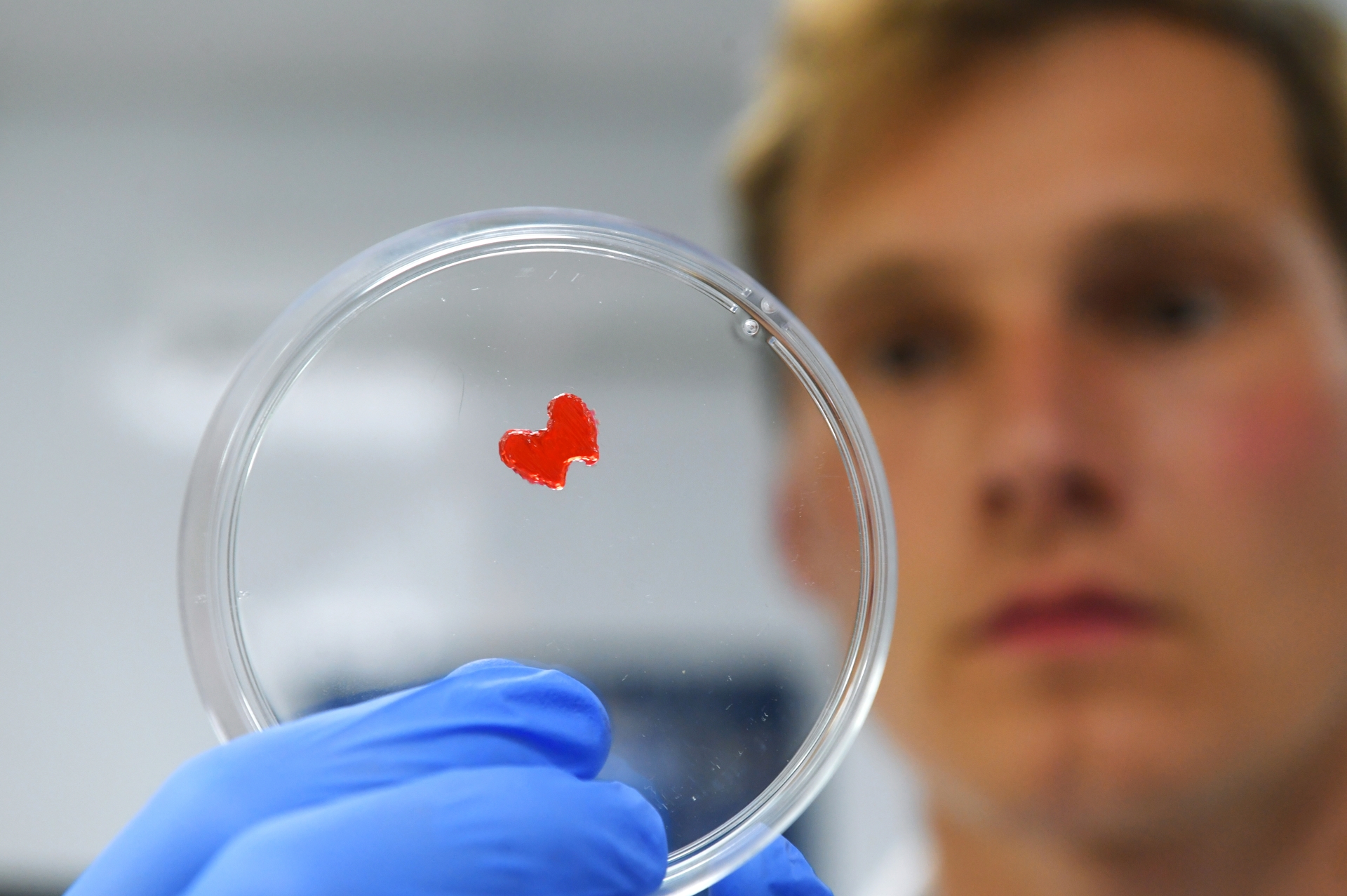 What can be printed in space and what materials will be used for this?

- The European Space Agency is now very far from the moon.

It is important to understand that the now popular term "3D printing" is often used too loosely.

The project with a lunar base assumed the use of elements of additive technologies (technologies for building up and synthesizing objects. -

), but the label "3D printing" glued to it is completely inappropriate.

At the same time, the very idea of ​​using local materials to produce anything on the Moon, Mars or Pandora is the only correct one. 3D printing will certainly play an important, but not exclusive role in these projects. The European Space Agency makes a kind of reserve for the future with such conceptual projects.

If we talk about 3D printing in space today, then the most widespread and affordable technology - Fused Filament Fabrication (production by fusing filaments. -

) is quite ready to work on a space station and in zero gravity and be used, for example, for the manufacture of devices and experimental equipment on the ISS.

The problem is the material that will have to be delivered from Earth.

The question is which is more efficient: deliver finished parts from Earth or deliver a printer and consumables into space.

- When will 3D technologies be launched in space and how will the use of 3D printers on the Moon differ from their use on Earth?

- Rockets with parts printed on 3D printers are already being sent into space.

Various 3D printing technologies can be used on the Moon, both adapted from "earthly" ones, and specially developed for new missions.

To solve the problems of building the outer hulls of lunar bases, for example, the technology of selective sintering can be used (the process of obtaining solid and porous materials from small powdery or dusty materials at elevated temperatures and / or high pressure. -

), in which the material will be the lunar soil , and the source of energy is sunlight.

- What is the difference between models printed on 3D printers and parts made using traditional technologies?

“There are many 3D printing technologies and there are different materials for them.

For these technologies and materials, it is more correct to use different references from the world of traditional technologies.

In the most widespread technology (Fused Filament Fabrication), one of the key features is a strongly pronounced anisotropy of properties (a characteristic of a physical body, which consists in the fact that its various properties in different directions appear quantitatively differently.

The printed product is not monolithic, it is formed by polymer threads laid in parallel layers.

Along the layers there are some properties, across - others.

“In the coming decades, bioprinting could be the next milestone in healthcare and personalized medicine.

Advances in 3D bioprinting have been the creation of human skin, cartilage, bones, blood vessels, and internal organs such as the heart and kidneys.

How safe are printed organs and can they be transplanted to humans?

- Traditional transplantation has never been and probably will not be safe.

The transplanted organ is perceived by the body as a foreign object and is constantly attacked by the immune system.

In this sense, artificial organs grown from an acceptor organism's own stem cells and printed on a 3D bioprinter may become safer than “traditional” solutions.

- Thanks to 3D printing, products such as chocolate, pasta, sugar and others can be produced.

Why do I need to print products?

“In edible 3D printing, it is important to distinguish between two completely different directions.

The first is shaping the edible material as needed, such as printing edible cake decorations.

The second direction, which has a very indirect relationship to 3D printing in its classical sense (non-tool production of simple and complex shapes by layer-by-layer addition of material), implies not so much giving the product the required shape as the synthesis of the material.

Why raise a whole cow when you can only “grow” a steak from stem cells?

- In the modern world, 3D printers are used in various fields: mechanical engineering, architecture, small-scale production and many others.

What other prospects does this area have?

- Digital additive technologies complement subtractive (traditional methods of production and processing, where the formation of the product's appearance occurs by removing excess material. -

) and deformation (traditional methods of processing materials by pressure. -

) in all branches of modern industry. We are currently experiencing major changes in the industrial order, but it is a mistake to link this solely with the advent of 3D printing. The revolution is about replacing digital manufacturing technologies with analogs, not replacing 3D printers with milling machines or stamping presses.

The most important perspective for the development of 3D printers, as well as other modern digital production machines, is personal production, and this concept has two meanings. First, with the help of digital machines, you can efficiently produce personalized products - one-of-a-kind products needed by a single person. And secondly, a 3D printer is a personal means of production.

For several centuries the world was divided into owners of the means of production and into everyone else, but today this line is blurring.

An inexpensive home (personal, desktop, hobbyist) 3D printer has a very low performance, but it is easily compensated by a large number of these printers, which allows you to start moving in the direction from mass production, which cannot exist without mass consumption, to distributed personal production.

In the midst of the first wave of the global coronavirus pandemic, when due to the epidemic and related restrictive measures, the supply chains for the production and supply of goods instantly collapsed, the whole world faced a shortage of personal protective equipment: masks, face shields, gloves. These products were in short supply for doctors and medical personnel, and “makers” - owners of home 3D printers - came to the rescue. They worked as volunteers and set up the release of various products and their donation to doctors. Thousands of hobbyist 3D printers worldwide - in the United States, India, Peru and Russia - went into production and, according to statistics from the non-profit organization Open Source Medical Supply, produced more than 40 million pieces of hard-to-find items before the global distribution and mass production system was restored to service.

- How are Russian 3D printing technologies developing and what 3D printers are used in Russia?

- 3D printing technologies have been developing since the mid-1980s, with significant progress in the 1990s.

At this time, both the USSR and Russia had very limited opportunities to create new science-intensive technology.

However, after 1991, the Institute for Problems of Laser and Information Technologies of the Russian Academy of Sciences produced a stereolithography unit (an additive manufacturing process, the result of which is achieved through photopolymerization of the resin. -

In the last decade, there are enough large and small developers and manufacturers of 3D printers in Russia, many solutions are competitive on the global market.

- Recently, AMT, a resident of the Skolkovo Foundation, announced that it would build a village of 12 houses in the Yaroslavl Region using a 3D printer.

How will the printing be carried out and will it be possible to live in such houses?

- Construction printing is a separate area of ​​digital additive technologies, and it also develops in different ways.

The most popular scheme now is printing with concrete or geopolymer concrete.

Another scheme, developed in Russia, is printing with a special polymer gel that hardens under ultraviolet light.

There are two different approaches.

In the first, a mobile 3D printer is deployed on a construction site and prints the walls of the building directly onto the foundation.

The second approach is to print the modules of the future building at the factory with their subsequent delivery to the construction site.

People already live in both types of houses.

What kind of printing is this?

- 4D printing is a popular and common term that can mean very different solutions.

The most popular interpretation: 4D printing is the printing of products whose shape is not static.

An example of 4D printing is the simultaneous printing of materials with different properties.

Rigid and elastic areas are formed in the product, and thus the behavior of the product under load is programmed.

4D printing allows you to print objects larger than the printer on which it is carried out.

The object removed from the printer unfolds, increasing in size.

A possible ultimate goal for the development of 4D printing is to print a robot that can itself get out, go out, crawl out or fly out of the printer that printed it.

- Can 3D printers help us in the exploration of other planets, such as Mars?

Is it possible that with colonization we will be able to create 3D parts directly from useful resources found on the planet?

- We need to stop dreaming about colonization and terraforming (the theory of the hypothetical possibility of changing climatic conditions on space bodies. -

It is necessary to work on terraforming our native Earth.

The Industrial Revolution and its main achievements - mass production and consumption - led to the fact that our habitat became toxic to life.

To continue development, humanity needs to develop new, more efficient systems for the generation and distribution of resources.

3D printing as part of the future distributed personal manufacturing system will play an important role in this.

Having solved critical problems on Earth, it will be possible to think about the colonization of other planets.