It is a real-time e-news that looks at the news that has become a hot topic on the Internet overnight. An article that exposed the private life of a male actor drew attention online, drawing attention to its authenticity. 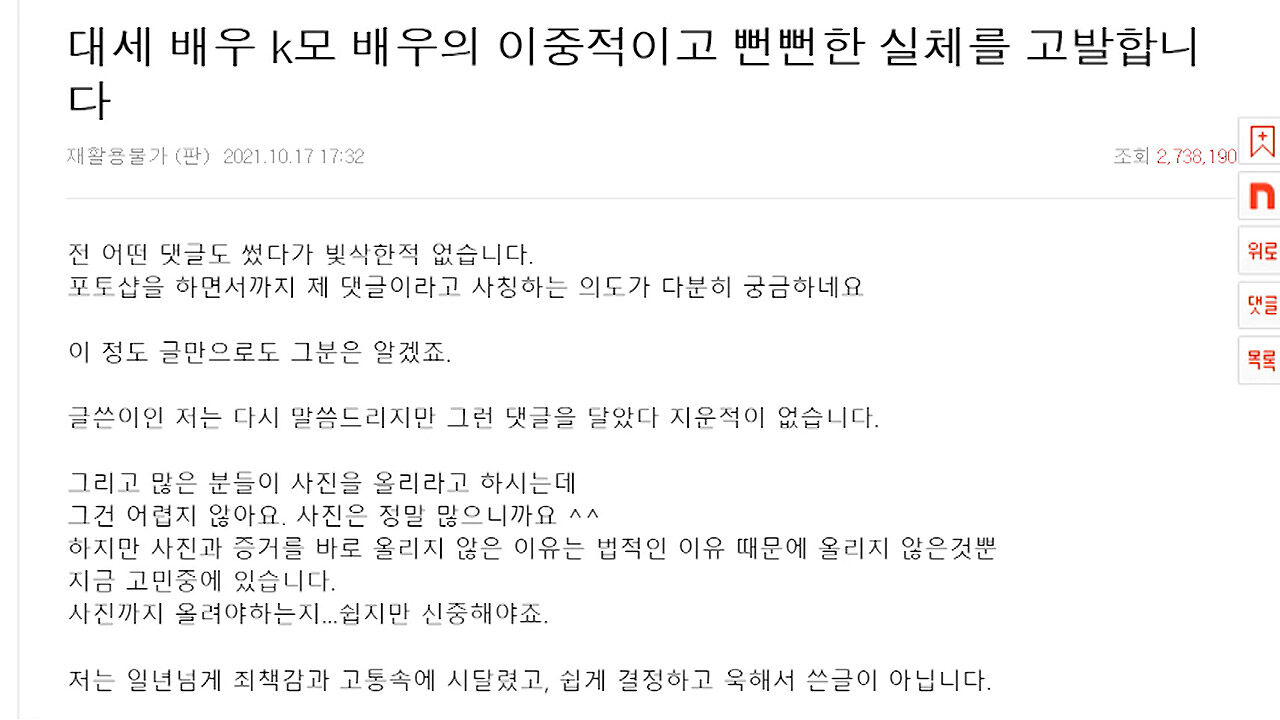 An article that exposed the private life of a male actor drew attention online, drawing attention to its authenticity.

On the 17th, on the online community, an article was posted saying, 'I am accusing the double and shameless reality of the popular actor K'.

The author, who stated that he had a relationship with Mr. K in the past, claimed that Mr. K forced abortion under the pretext of marriage, and that K.

It was he who suffered mental and physical damage and trauma in the process, but Mr. K revealed that he was annoyed and had severe emotional ups and downs using the work as an excuse.

The authenticity of the article is not known, but when some netizens pointed out that there is evidence that there could be unexpected damage, the author added that there are many photos and evidence, and that it was only not uploaded for legal reasons.

drama 'Squid Game' is gaining popularity around the world, I've seen many articles saying that the game of memories in the drama is being played even in the Netherlands.

Last weekend, on a street in Maastricht, the Netherlands, a large tagger doll from the first episode of the squid game, 'The Flower of Mugunghwa has bloomed' appeared.

When the sound of 'Mugunghwa Flower' was heard, people moved and stopped as if they had become participants in the drama.

Prizes such as dalgona and green sportswear were delivered to those who won the game, and the popularity of the drama was realized as not only the game participants but also the crowds who wanted to watch the game flocked to it.

There was also a lot of interest in an article that a rib restaurant in Busan, which was recently controversial for reusing kimchi, was eventually subject to administrative suspension.

Suyeong-gu Office in Busan announced that it had suspended business for 15 days at A Galbit House, where it was confirmed that kimchi was reused.

Earlier, on the 9th, an online community raised suspicions about the reuse of kimchi in A ribs.

The netizen who raised the suspicion pointed out that someone ordered the set meal, but there was grilled kimchi that was grilled on the fire inside the raw kimchi.

The owner of the ribs restaurant explained that at the time, a customer came while family and acquaintances were having a meal, and the employee mistakenly served the fried kimchi that was meant to be served to the family.

However, the article said that the explanation of the owner was a lie as the administrative disposition was issued by the competent ward office.