Aery Yormany is a time traveler, he comes from the year 2714, who has taken advantage of the popular Tik Tok network, where he has more than 870,000 followers, to warn humanity ... 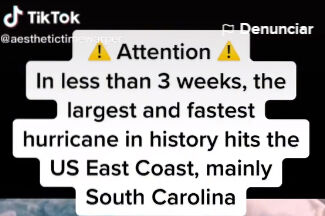 Aery Yormany is a time traveler, he comes from the year 2714, who has taken advantage of the popular Tik Tok network, where he has more than 870,000 followers, to warn humanity of three impending catastrophes that will change the planet earth.

In his videos, in addition to warning that these three hecatombs will take place

, one of them coinciding with the 20th anniversary of the attacks against the Twin Towers of New York on 9/11, he assures that this same year, or in what remains him, there will be eight people who receive

super powers of the sun

We do not know if for better or for worse.

Yormany, who is nearly 700 years ahead of us in time, has returned to tell us that in 2023 that the

, some extraterrestrials, will come to infiltrate governments (if they have not already seen what they have seen) and in 2024 we will have a big nuclear explosion.

But before these predictions we have those for September, on the 11th and 26th, more at hand to be able to check if this traveler is correct or not because, for now, planet earth will survive at least until 2024, the year of the supposed nuclear explosion.

The first misfortune that Yormany predicts is for next Saturday when "an alien will take 4000 skilled workers and children to planet Proxima B, as a result of the arrival of another hostile species."

will come three days later and will be a Category 6 super hurricane that will hit South Carolina.

"On September 14, the largest hurricane in history will hit the East Coast of the United States, making it the first category 6 hurricane."

The third and final misfortune (perhaps not under the category misfortune for other human beings) for this month, will be that

chimpanzees are able to speak

r "because of a mutation in their vocal cords."

Aery Yormany on his round trip through time has not been reported that a coronavirus pandemic has killed 4,586,369 people in the world

in 18 months, according to the latest tally by the US Johns Hopkins University.