Eight corners of Santiago (apart from the cathedral) that will make you fall in love, whether you are a pilgrim or not

Santiago de Compostela celebrates its big day, the most anticipated of the whole year. July 25 is the day of the patron saint of the city (and that of Spain, since 1630), but this time, in addition, 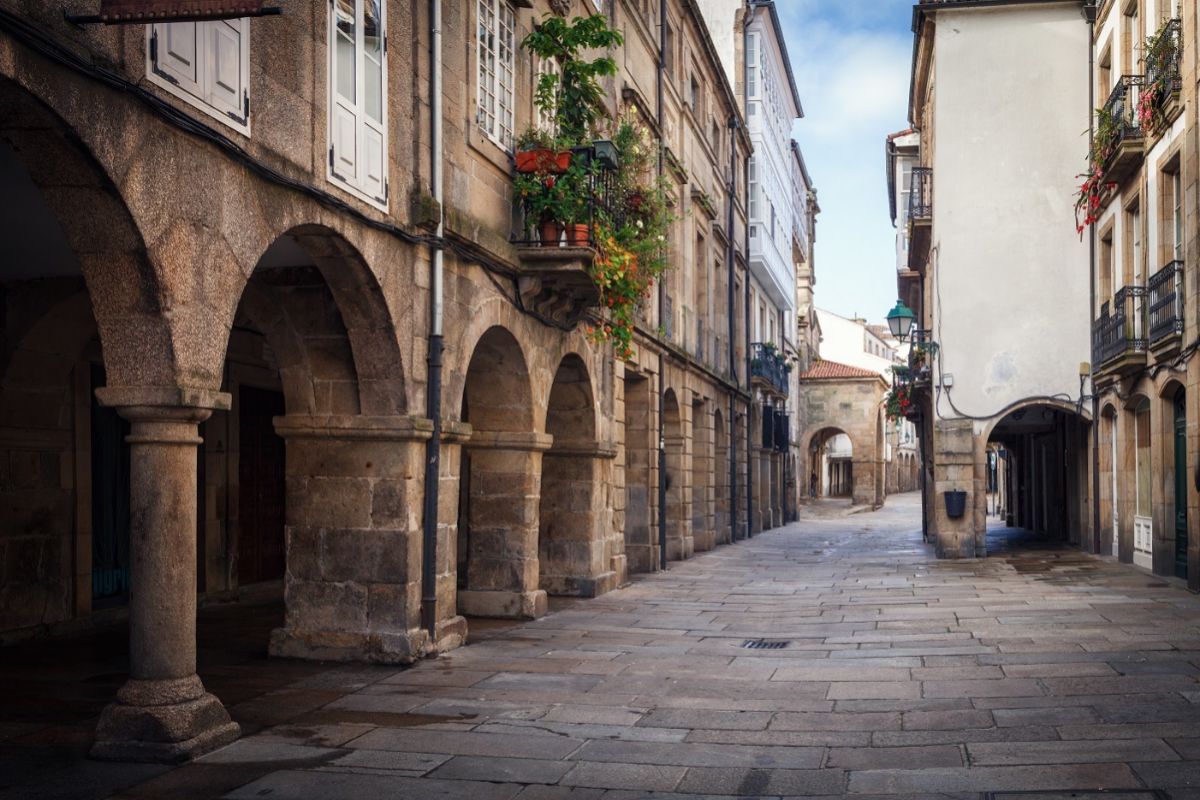 , the most anticipated of the whole year. July 25 is the day of the patron saint of the city (and that of Spain, since 1630), but this time, in addition, the joy is double, because it falls on a Sunday, which means that, for Catholics, it is Jacobean Holy Year or Compostela Holy Year. To the thousands of pilgrims who regularly go to the Galician city, there are now those who want to obtain the plenary indulgence (only in Holy Year) or those interested in going through the

, located at the back of the Cathedral, which only opens this time (the last time was in 2010).

Visitors who come to the city these days will also find

which, although marked by restrictive sanitary measures, will host all kinds of activities until July 31, such as concerts, monologues, open-air cinema , circus, sports, shows for the little ones, big heads and folklore days, also with the participation of Cantigas and Cariños (see program here).

Whether you are a pilgrim or a tourist, we recommend several corners of this magical city with legends that you must know, apart from, of course, the

, the Hostal de los Reyes Católicos and the

, where both are located. monuments and that they are two of the greatest claims of Santiago.

Old City and its streets

Streets of the Old City.

The old town of Santiago, within the walls, houses most of the most important monuments of the city. Declared a World Heritage Site for its cathedral and the historical complex that surrounds it, getting lost in its narrow medieval streets is a trip to the past. In addition to the famous squares of Obradoiro and Quintana, there are others such as La

, between the monastery of San Martiño Pinario and the cathedral façade of La Azabachería, which owes its name to the traditional presence of dedicated workshops. To the size of the jet, that of

, is the south square of the Cathedral, which owes its name to the goldsmiths' workshops located since the Middle Ages in the lower part of the cloister, or the charming squares of

, known in the 12th century as the Forum, for being a popular meeting point, that of

, with its terraces and flower

The center is full of narrow streets (

; some dead-end and more than 800 years old, such as Rúa Nova), flanked by important buildings, be they churches, convents or Renaissance, Baroque and neoclassical mansions, which respond to the prototype of urban pazo.

Among the most famous streets are that of

Mount Pedroso and the viewpoints

The city from Mount Pedroso.

Although the first panoramic view of the city for many pilgrims is from Monte del Gozo (it is the last stage of the Camino de Santiago Frances to reach the city), there are other places in the surroundings from which you can enjoy spectacular views of Santiago and the cathedral.

One of them is Monte Pedroso, about 6 km to the north.

The bucolic natural environment is full of trails ideal for hiking and cycling.

It has several viewpoints and it is advisable to go at sunset to see the last rays of the sun reflected on the facade of the temple.

Bonaval Park and its cemetery

Outside the walls, on a hillside, this park is located, one of the many green spaces in Santiago, also called San Domingos because it houses the medieval Dominican convent, next to the current

Museum of the Galician People

Quiet and with incredible views of the Cathedral, there are also a sculpture of Chillida and a unique cemetery with niches of different colors.

In the same monastery, in an empty church and inside the

, you can visit the majestic tomb of Rosalía de Castro.

Belvis Park and its labyrinth

Next to the old town this green space is nestled with meadows on the banks of a stream.

In it there are three identical labyrinths, created from camellia hedges, which occupy an area of ​​4,000 square meters.

Going into them and then finding the exit is quite a challenge (the height of the hedges is around 1.80 meters).

It is the second most visited place in the city after the Cathedral.

Although the current building dates from 1941, the City Market has been offering fresh local produce for three centuries.

Today, the market is a place to buy, admire and consume.

Hall 5 is dedicated to catering, with numerous establishments offering their traditional dishes to be consumed at the central tables with stools (open from Monday to Saturday, from 11:30 a.m. to 5:00 p.m.).

Faculty of Geography and History and its library

With its more than 500 years, the University of Santiago is one of the oldest in the world.

The Faculty of Geography and History stands out, a neoclassical building with huge columns built in the 18th century.

Inside, there are the magnificent Libraries (of origin in the 16th century and with invaluable copies) and a reading room, the cloister with a garden, the Paraninfo with frescoes by Fenolera and González, the Rectorate (with beautiful chairs from the 17th century ) and the terraces on the top floor with views of the entire city.

The site can be visited by expert guides.

This 12th-century architectural jewel, on the banks of the river Sar, is, together with the Cathedral, the church that preserves most of its primitive Romanesque factory.

Its appeal, among other things, comes from the singular inclination of its interior walls and columns.

The barrel vault that covers them had to be redone in the 16th century.

Inside, the baptismal font, an archaeological piece from the 12th century, and the cloister, the only one that the city has in Romanesque style, also stand out.

The porch of glory

It is the western entrance to the Cathedral of Santiago, considered

a masterpiece of universal Romanesque sculpture

Completed in 1188, this superb set of three arches, sculpted by Maestro Mateo in just 20 years, features more than 200 granite figures, as vivid and expressive as they had never been represented in the Middle Ages.

As if it were an animated painting focused on the Salvation of Man, in the upper part it represents scenes equivalent to the Earth, the Last Judgment and the Glory.

Visits only to the Portico are free, but you have to reserve the invitations here.

To visit this work of art and the Cathedral Museum with an audio guide, book here (price: 12 euros).

It occupies the spectacular building of the Hospital / Hostal Reyes Católicos, from the 15th century, in the Obradoiro square, next to the Cathedral.

A former accommodation for pilgrims, it preserves many original features, such as vaulted ceilings, stone arches and tapestries.

The rooms are spacious, decorated in a classic style and some have a four-poster bed.

Interior of the Parador de Santiago.

In the middle of gardens and with a large central atrium, this modern and quiet hotel is about a 20-minute walk from the historic center of the city.

The aforementioned nave 5 of the Mercado de Abastos has a very varied offer of Compostela and Galician gastronomy.

To taste the traditional octopus a feira, the

specialized in homemade and traditional food,

and experts in seafood,

(Hortas, 1. 981 558 580) is a bar very close to the Cathedral in which the protagonists are Galician and Japanese products.

(Virxe da Cerca, 7; 981 562 314) offers traditional dishes with a modern perspective, in which the ingredients are products from Km 0 (it even has its own garden).

* By booking these accommodations through our website, readers will not get discounts or additional benefits, but they will help Metrópoli to obtain a commission for each reservation as an affiliate of the Booking.com program.

GetawayCartagena exhibits its charms to the world

Tourism Getaway to the tiny medieval town that everyone talks about