More than 5,000 people struggle in Tokyo during the all-night siege… In front of the 'courier crisis'

Post office delivery workers belonging to the delivery union, which went on an indefinite strike since the 9th, occupied the first floor of the Yeouido Post Office building in Seoul and held a sit-down last night. 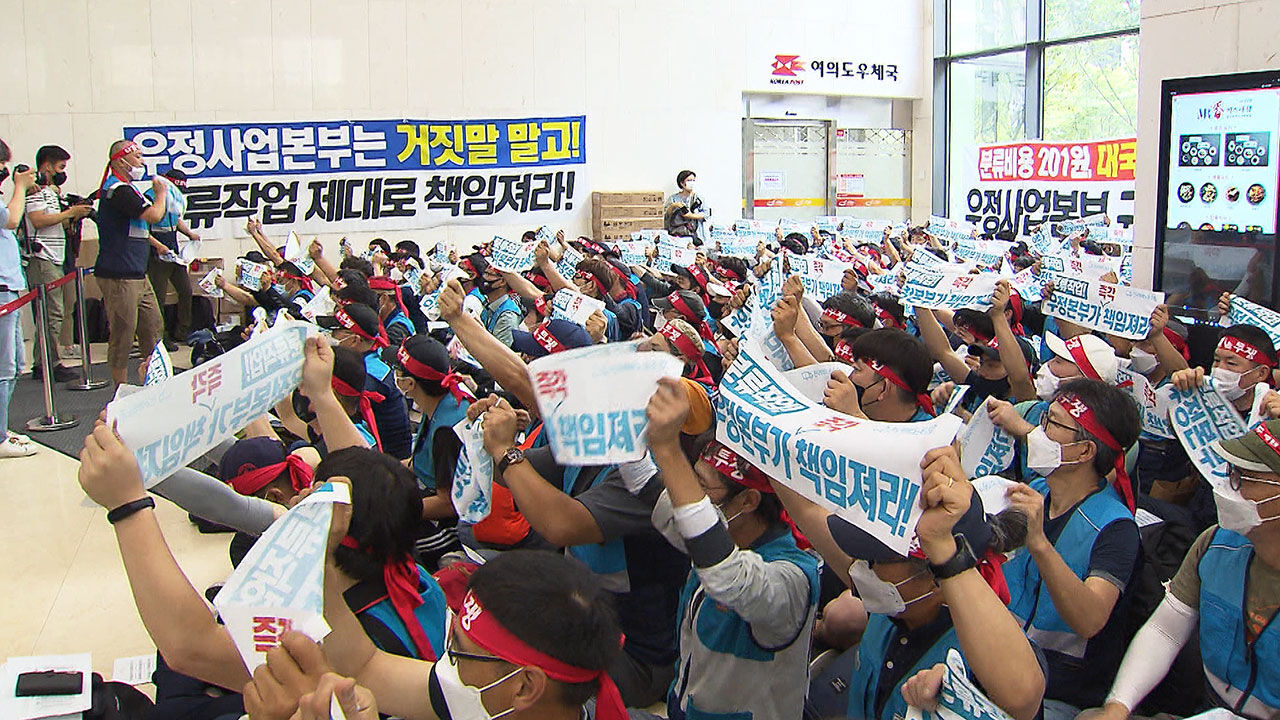 Post office delivery workers belonging to the delivery union, which went on an indefinite strike since the 9th, occupied the first floor of the Yeouido Post Office building in Seoul and held a protest last night. Today (15th), about 5,000 union members are going to fight in business. They are demanding that the social consensus not to pass the parcel sorting task on to individual workers is being followed, but the response from the employer is also strong. I am worried that this will lead to a courier crisis, where only consumers have to endure inconvenience.

Post office delivery workers belonging to the delivery union have occupied the first floor of the post office building in Yeouido, Seoul since yesterday morning, and about 80 people staged an all-night demonstration.

[Kim Tae-wan / Senior Vice President of the National Delivery Labor Union: We strongly condemn the fraudulent behavior of the public for not paying the sorting fee. The Postal Service Headquarters, a national public institution, is the biggest obstacle to social consensus.] The

union criticized the Postal Service Headquarters for not paying a fee for sorting costs, so the sorting work was passed on to individual workers.

He also protested the decision to employ couriers in a 'work gap' following the courier union's refusal to deliver, calling it 'neutralizing the union'.

The next day, a delivery driver belonging to Lotte Global Logistics claimed that the collapse of multiple cerebral hemorrhage was due to overwork and demanded immediate improvement of the working environment.

The courier union announced that over 5,000 people will fight in business for two days starting today.

In response to this, the Association of Courier Agents, which can be said to be the management side, also announced that the business would be suspended as early as the day after the next day, increasing the possibility of a realization of the Courier Disaster.

Distributors oppose a general strike by the courier union and have demanded that couriers also clarify when to deploy sorting workers.

[Agents Association official: We will report the assembly on Thursday, Friday, Saturday, and Sunday. I'm also trying to do something like completely shutting down the terminal... If you claim one thing too unfairly, another one... .]

Couriers, however, demand a grace period of one year for sorting personnel, so there is still a difference in their positions.

There is also a move to resume negotiations for the second social agreement in the National Assembly tomorrow, so it is expected to be a watershed in this situation.