From a machine gun to a TT pistol: what inventions the gunsmith Fyodor Tokarev became famous for

On June 14, 1871, the famous Russian gunsmith, creator of the TT pistol Fyodor Tokarev was born. Real fame came to him after the revolution while working in Tula. The designer's talent was clearly manifested in the manufacture of automatic weapons. Tokarev's best inventions are considered to be the TT pistol and the SVT-40 self-loading rifle. Not all of the samples he created were put into mass production. However, experts believe that Tokarev's activities gave impetus to the development of weapons thought in the USSR and provided the Soviet troops with several types of effective firearms. 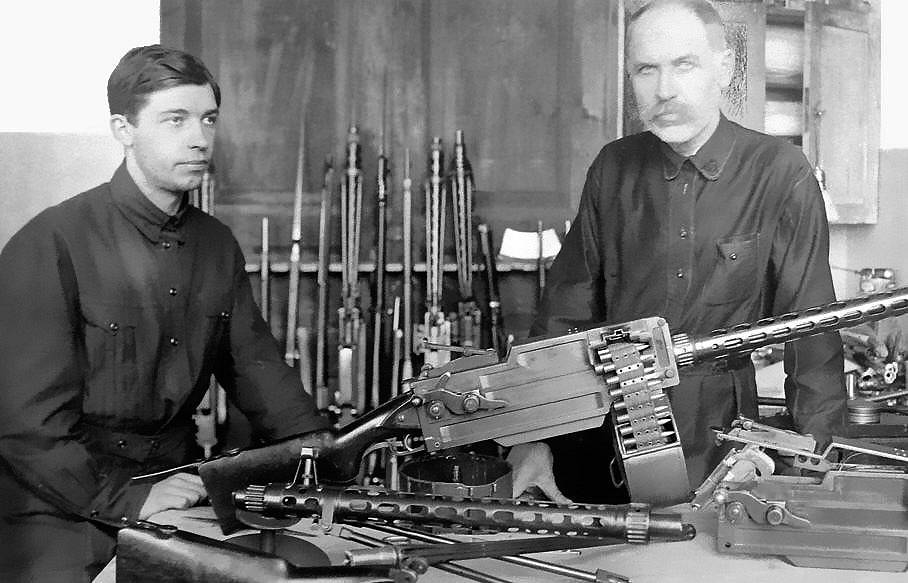 He became famous for the development of highly effective army firearms.

Tokarev's most famous products are the TT pistol and the SVT-40 self-loading rifle.

The future designer graduated from a military craft school in Novocherkassk.

In 1907, Tokarev, who at that time served in the 12th Don Cossack Regiment, was sent near St. Petersburg to courses at the Officer Rifle School of Oranienbaum (now Lomonosov).

In this institution, Tokarev studied various types of automatic weapons.

Their research prompted him to create his own model of an automatic rifle, taking as a basis the three-line model of Sergei Mosin that was in service.

Based on the results of testing a prototype of a new weapon, Tokarev received a cash prize and was seconded to the Sestroretsk Arms Plant to refine his brainchild.

The improvement of the prototype automatic rifle was delayed, and in 1914, the First World War made adjustments to the designer's plans.

Tokarev was sent to the front.

As Alexander Mikhailov, a specialist-historian of the Victory Museum, noted in an interview with RT, the work on the automatic rifle was not in vain.

Work on this model of firearms subsequently allowed Tokarev to create original self-loading firearms, some of which were put into service.

After the October Revolution, the Bolshevik government sent a former officer of the tsarist army to the Izhevsk arms factory.

In 1920, on charges of industrial marriage, Tokarev almost fell victim to repression.

The designer was sentenced to death, but the death penalty was replaced by 15 years in prison.

In 1921, the harsh sentence was appealed, and Tokarev began work at the Tula arms factory.

From this moment, the heyday of his design activities begins.

Thanks to the development of Tokarev in 1925, the Red Army received the first domestic light machine gun MT ("Maxim-Tokarev").

The weapon was made on the basis of the Hiram Maxim heavy machine gun, which is widespread in the Red Army and abroad.

Tokarev found technical solutions that made it possible to lighten the basic sample.

In particular, the heavy water-cooled Maxim machine gun was replaced with a lightweight removable casing.

Also, the gunsmith created a new trigger mechanism, thanks to which it was possible to significantly reduce the length of the receiver.

In total, the inventor was able to "remove" more than 7 kg of "excess weight" from the base product.

Structurally, the MT was considered a very modern weapon, although by today's standards it turned out to be quite large and heavy: the length of the machine gun was 1330 mm, the weight without cartridges was 12.9 kg.

The widespread production of Tokarev's brainchild was not established, but the main reason was not the weight and size characteristics, but the unsatisfactory quality of the manufacture of individual elements.

According to experts, this situation was the result of the devastating consequences of the First World War and the Civil War.

Nevertheless, in its short century, MT still managed to make war - the Soviet authorities transferred a batch of these machine guns to the supporters of the republic during the civil war in Spain in 1936-1939.

Also in the USSR, Tokarev made a significant contribution to the development of submachine guns: the Tula inventor became a pioneer in the manufacture of the latest class of army weapons at that time.

In 1927, he introduced the PPT-27 model for a modified revolving cartridge of the 7.62 mm Nagant system.

The mass of the weapon was 2.4 kg, the magazine capacity was 21 rounds.

However, the leadership of the Red Army did not appreciate the efforts of the Tula gunsmith.

The military were dissatisfied with the insufficient power of the ammunition used and the presence of such a problem as the periodic sticking of the edge of the cartridge case.

In this regard, a new cartridge was created for the PPT-27, and the design itself underwent a radical modernization.

This brainchild of Tokarev successfully competed with the submachine guns of another famous domestic gunsmith - Vasily Degtyarev.

But, perhaps, the legendary TT pistol can be called the most popular model made by the Tula designer.

This invention was created to replace the super popular Nagant revolver and became the first self-loading personal weapon of the Red Army officers.

The pistol was designed for a powerful 7.62 x 25 mm cartridge.

Initially, the capacity of the TT magazine was eight ammunition, but later modifications appeared for 12 and 15 rounds.

Tokarev created a weapon with high destructive power and accuracy of fire.

In 1933, the TT underwent a small modernization and was produced in this form until the early 1950s, before the appearance of the Makarov pistol.

The brainchild of the Tula designer was produced in the USSR, China, Hungary, Poland and Yugoslavia.

More than 1.7 million units were manufactured in total.

TT is one of the symbols of Victory in the Great Patriotic War.

When developing the pistol, Tokarev analyzed the design of the samples of the Colt and Browning families.

As a result, he integrated into the TT automation based on recoil energy with a short barrel stroke, a longitudinally moving trigger and a locking mechanism.

At the same time, many original solutions were implemented in TT.

For example, Tokarev was the first in the world to develop a trigger mechanism, which was a block separately removed from a pistol.

The disadvantages of TTs are usually attributed to a low firing range, the absence of a mechanical safety lock and a weak fixation of the store.

However, as experts note, these problems were offset by significant firepower, unpretentious operation, simplicity and low cost of production.

In the Armed Forces of the Soviet Union, TT was used until the early 1960s.

Basically, it was used by officers of the tank and air forces, employees of the NKVD and special services.

“The advantages of the TT pistol are ease of operation and the presence of a rather powerful caliber at the time of creation.

The TT became a worthy personal weapon of Soviet officers after the revolver of the Nagant system.

Its appearance played a significant role in the development of domestic pistols.

Along with the PPSh, Tokarev's pistol is one of the symbols of victory, "Alexander Butyrin, columnist for the Fire Frontier magazine, explained in a conversation with RT.

From the point of view of experts, the pinnacle of Tokarev's design skills is the SVT-38 self-loading rifle.

After being used in the war with Finland, the weapon was modified and put into service under the SVT-40 index.

In the troops, the novelty was affectionately called "Svetka".

The mass production of the Tokarev rifle was deployed before the start of the Great Patriotic War.

It was assumed that in the future, Tokarev's product will gradually replace the less rapid-fire three-rulers.

Armed with a new automatic rifle, a fighter with a timely change of stores could produce up to 30 rounds per minute or use it as a sniper weapon.

Experts believe that the SVT-40 was superior in efficiency to the best Western models.

“The creation of a self-loading rifle became Tokarev's main occupation in the pre-war period.

And I must say that the SVT-40 turned out to be a very successful product.

She was received with great respect in the career army, "Vasily Zabolotny, deputy director of the Museum of Russian Military History, emphasized in a conversation with RT.

According to the specialist, leading Western companies worked on the problem of creating an effective automatic rifle, but they did not succeed in achieving success.

Only Tokarev was able to solve this most difficult task.

As Zabolotny said, the enemy of the USSR in the Great Patriotic War highly appreciated Svetka - the Germans used captured SVT-40s and copied a number of mechanisms from there.

“Subsequently, some of the technical solutions used by Tokarev in the SVT-40 helped develop the famous Dragunov sniper rifle (SVD -

), which is still in service with the Russian army,” Zabolotny said.

As noted by Alexander Mikhailov, the high tactical and technical characteristics of the Svetka for its time significantly increased the firepower of the infantry, however, the Great Patriotic War intervened in the plans to equip the Red Army units with this weapon.

The SVT-40 was expensive to manufacture and difficult to operate for poorly trained recruits.

In this regard, during the Great Patriotic War, preference was given to Mosin rifles and Shpagin submachine guns (PPSh), the design of which made it possible to ensure mass production in the most difficult conditions of those years, experts say.

“And yet our soldiers did not part with the weapons that Fyodor Tokarev created from the first to the last days of the war. His talent helped to defend Brest, Minsk, Kiev and Moscow, to fight on the streets of Stalingrad, near Kursk, and then liberate the whole country and half of Europe, "Mikhailov emphasized.