Haute cuisine within the markets of Madrid

Just over a decade ago, Madrid's markets were dying. The stalls of the food centers closed and left many of these spaces on the edge of the precipice. 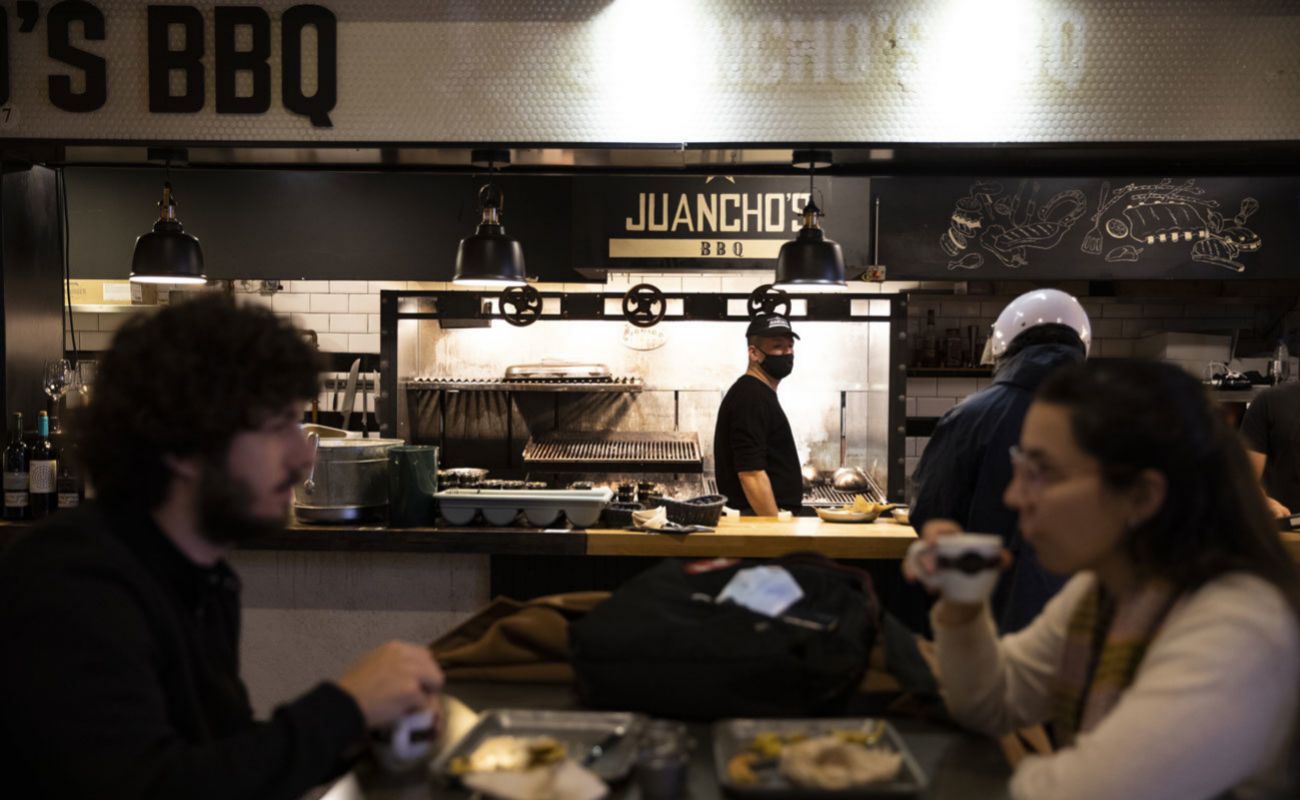 Just over a decade ago, Madrid's markets were dying. The stalls of the food centers closed and left many of these spaces on the edge of the precipice. Everything began to change when young people found in them a business opportunity ... Now, the usual stalls coexist with the new gastronomic spaces. "Markets, to be competitive, have to adapt their commercial and service offer to the demand of their customers", says

Concha Díaz de Villegas, head of the General Directorate of Tourism and Hospitality of the Madrid City Council

And so much, since in the last year, thanks to the strategic plan promoted by this organization, not only have the facilities of these centers been improved, but the opening of a hundred stores has also been promoted, as well as applications such as lacomprasidagusto.com.

In the midst of a pandemic ... Because Madrid's markets are in fashion and

its culinary possibilities are (almost) endless

680 543 942/689 486 951 | From 1pm to 4pm and from 7.45pm to 10pm. | Closed on Sundays and Mondays | Average price: 25 euros. Of Indonesian origin, Izzy Tan is the person in charge of the stoves of this position located on the ground floor of the food center. In its menu, various street dishes from Southeast Asia coexist, without merging. In a tiny military-chic-style dining room, recipes with authentic flavors are served, such as laksa, a long noodle soup with shrimp and coconut, very aromatic and spicy, which in this house is prepared according to the recipe of the grandmother of the cook. It is addictive.

91 530 54 99 | Lunch shifts: 1.30pm and 3pm. Dinner shifts: 7.30pm and 9.15pm. | Closed on Sundays and Mondays | Average price: 40 euros. Three years after closing his restaurant La Candela Restó (distinguished with a Michelin star), chef Sami Alí reappeared during the summer of 2020 in this corner of Antón Martín. Your culinary proposal has no labels. Its menu mixes everything: flavors, textures, culinary techniques from here and there ... The result? A gastronomic mischief that has spread like wildfire among Madrid's palates. To eat, grilled banana kare with roasted pickles or crunchy taco of sweet shrimp and jalapeño tartare.

Yoka Kamada was a pioneer in the gastro revolution of the Antón Martín Market.

She was the first to find herself among vegetable stalls and butchers to offer, in a picturesque sushi bar (later it was expanded with a small lounge), Japanese specialties of all kinds.

Daniel Pozuelo is the creator of this modest position, where it is committed to a cuisine of Mediterranean flavors dotted with exotic memories.

The menu varies often, depending on the market itself (the suppliers are the neighboring shopkeepers), but here are some dishes to compose an idea: grilled rabbit with green curry, wild boar with beans, horse mackerel in semi-salted with pink tomato and pesto of cilantro...

Juancho's BBQ: in the Chamberí market, the best hamburgers in Spain.Antonio Heredia.

Closed on Sunday nights and Monday |

In La Chispería, the gastronomic space of the Chamberí Market, among the different options to eat, you will find this small branch of

, a restaurant specializing in grilled meats famous for its

, a version of the

improved with Iberian bacon and a secret dressing.

In 2019 it was chosen the Best Burger in Spain.

601 359 850/690 018 701 | From 1:30 p.m. to 11 p.m. | Closed Saturday noon, Sunday and Monday | average price: 25 euros. La Guindalera's clandestine sushi is commanded by José Fernando Tizón and Lucía Mancheno, from Peru and Ecuador, respectively. They met while working on the late (and much-missed) Yataki by Emiliano Reyes, a visionary of Japanese-Latin fusion. The best of its menu are the special makis, such as the Fruit Roll (eel and avocado covered in mango) or the Tataki Roll (tuna flambé with yakiniku sauce). Also, tiraditos and ceviches.

An unexpected Italian space run by a couple of Sicilians who strive to elaborate authentic pasta recipes, such as spaghetti puttanesca, macaroni a la norma, authentic carbonara with guanciale, orecchiette with tuna and artichokes ... The offer is completed with pizzas (Diavola , with spicy salami; Rianata, with anchovies, onion, capers and pecorino) and a delicious cannolo for dessert.

Closed on Sundays and evenings |

A peculiar little place located in the most multicultural market in the city.

It began as a space for traditional Chinese cuisine, but it did not work ... At the height of Peruvian cuisine in Madrid, they decided to turn their offer towards chifa specialties.

Since then, the business has not stopped growing.

There is corvina ceviche, chaufa rice, tamales ... All at very affordable prices.

Casa Dani: in the La Paz market, their tortilla is among the best in the Villa and Corte.Antonio Heredia.

91 575 59 25 | From 7 a.m. to 7.30 p.m. | Closed on Sundays | Average price: 15 euros. There is no Madrilenian who has not heard of this establishment, opened in 1991 by Daniel García and Dolores Cuerda, famous for the potato omelette, one of the best in the Villa y Corte. More than 400 are made a day, with sour potatoes from Castilla-La Mancha and Galicia and eggs from the chicken man next door. They are stewed by eye (a single turn and less than a minute on each side) in iron pans, with and without onion. Chef José Andrés does not miss it when he comes to Madrid ...

| Ayala, 28 (places 12-13) | Phone: 91 449 70 43 | From 9 a.m. to 8 p.m. (Saturdays, until 2.30 pm) | Closed on Sundays | Average price: 20 euros. The comal (a kind of Mexican iron plate) is the king of this house. Tortillas, gorditas and other snacks are prepared daily in it, always made with corn, which are then accompanied by stews such as cochinita pibil, Oaxacan mole or pressed pork rinds. You can also order chilaquiles, guacamole with tortilla chips and very fresh chelas to pass the drink.

A space dedicated to French gastronomy where Gallic wines, champagnes and oysters are the main characters.

It has an ideal bar to have an aperitif (waffle bravas, ham croquette, Russian salad) and a dining room designed for dishes with more substance (grilled foie with mango cream, confit duck thigh).

91 143 52 16 | From 9 a.m. to 2 p.m. and from 5 p.m. to 8:30 p.m. | Closed on Saturday nights, Sundays and Mondays | Average price: 10 euros. Brewery and vermouth shop located in the center of the market that has become a meeting point for all its visitors. The beers are poured with authentic grace and each drink comes with a cap. The Russian salad has a legion of fans.

A bar dedicated to international tapas run by Isabel and Juan, who are fond of traveling and eating.

And that shows in his proposal, full of culinary winks from around the world: couscous salad (Tunisia), sausages (Germany), cauliflower curry (India), chicken wings in Filipino marinade, cod tripe Madrid-style. ..

A fun and affordable place to buy and drink wine.

Its offer includes a wide catalog of natural wines ("for intrepid drinkers", they say) from small producers and far from the big distributors.

(closed nights from Monday to Wednesday) |

Located in the Latina district, Tirso de Molina is surely the most unknown of Madrid's markets.

In addition to its structure, the work of the architect Luis Bellido, its stalls hide several surprises, such as the casqueria counter or this Paellamar, whose menu offers up to 17 varieties of rice (vegetable or seafood paella, black rice or seaweed and squid. ..) that can be taken there or ordered to take home.

Closed on Sunday nights and Monday |

Daniel Varea and Nacho García are responsible for this business specialized in fermented products.

In other words, kimchis, sauerkraut or hot sauces are embroidered here.

To try them, dishes like the meatballs with sauerkraut and red cabbage or the kimchi and cheese sandwich.

With some 70 references, almost all from Spain and some foreign, wine is the watchword in this small market wine bar.

For snacks, trendy torreznos seasoned with herbs or tripe with leg and nose.

Chef Roberto Martínez Foronda opened this position in 2017 with a bar and show kitchen.

It only offers a closed tasting menu (35 euros) full of exotic recipes, many made with Spanish products, such as torrezno with five Chinese spices or wok mussel ceviche.

Bombas, Lagartos y Rohetes: a temple of the aperitif in the Villa de Vallecas market.

Since 1964, the best banderillas that can be eaten in Madrid have come out of his post.

To accompany, one of the best vermouth selections in the capital.

One hundred and thirty degrees (bread and coffee);