Where did all of the '1.8 billion poured' election banners go?

The re-election was held on April 7th, and two weeks have passed. In Seoul and Busan, election banners that were hung in every neighborhood are now gone. Most of them are buried in the ground or burned, but the problem is that environmental pollutants are released in the process. 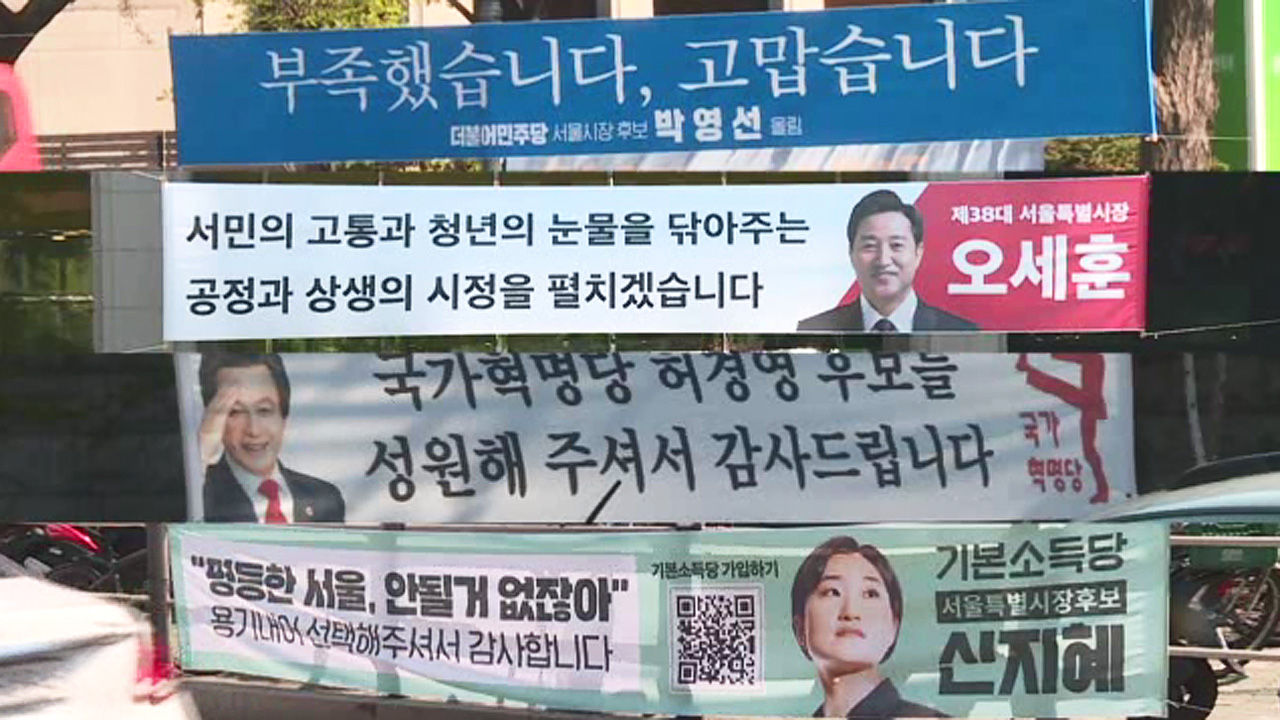 Two weeks have passed since the re-election was held on April 7th. In Seoul and Busan, election banners that were hung in every neighborhood are now gone. Most of them are buried in the ground or burned, but the problem is that environmental pollutants are released in the process. For this reason, there are voices asking not to use banners that are rarely recycled in future elections.

Two weeks after the re-election of the mayor of Seoul ended, banners with the winning and unsuccessful greetings are visible on the street.

Each candidate may place a banner in return for each building, but under the Public Official Election Act, it is only allowed for 13 days after the end of the election.

From today (21st) onwards, all postings are illegal, so you will be sentenced to up to a year in prison or a fine of up to 2 million won.

During the election, if 15 candidates for the mayor of Seoul walked two in each dong according to the law, there were 12,720 in total.

In addition, if you add the banner in return and the election encouraging banner of the election committee, it is estimated that more than 18,000 banners were hung only in the by-election of the mayor of Seoul.

In one line, it is 180km, which is farther from Seoul to Daejeon.

Where did those many election banners go?

When I asked the 25 district offices in the city of Seoul, they said that only 5 districts have plans to recycle, but the remaining 20 districts will be disposed of.

[Owner of the antique dealer: I do not handle it. I don't do it at all. (What is the reason for not handling it) First of all, it's not money.]

Banners that waste companies turn away are also the main culprit of environmental pollution.

This fabric is often used in the production of election banners.

Since it is made of plastic synthetic resin, it generates various environmental pollutants in the process.

When incinerated, carbon dioxide as well as dioxin, a first-class carcinogen, are released, and when buried in the ground, chemical dyes flow out and the soil is contaminated.

However, it is not easy to enforce eco-friendly banners.

The production cost is 3~4 times higher and the fabric is weak, so it is easily damaged by rain and wind.

So every time, the NEC, the government, and local governments pledge to upcycling like a habit, but there aren't many places that actually do that.

Eco-bag production is known as a representative recycling method, but even this has its limitations.

[Boyeon Yoon/President of Tiny Tiger/Creation of recycled eco-bag: The production cost is a bit high because there are parts that need to be cut and coated with clean parts, which have to be touched one by one, and that cannot be done with a machine.]

So, in the US It has already disappeared in Europe and Europe.

/Seoul Gocheok-dong: It's a part that's seen on TV or anywhere on the Internet, and I'm getting it by mail, but I think the banner isn't helpful.]

It's taken away. It

is pointed out that it is the greed of the politicians to stick to the banner every election.

[Kim Mi-hwa/Chairman of the Solidarity of Resource Recycling Society: I hope that we will not use the people's taxes to remove trash while causing inconvenience to the people." So, I ask the NEC to change the law and ban the use of banners..] If it

doesn't change, next year's presidential and local elections will be held in turn, and it's obvious that the banner riots will be on fire.

[Hongjongho / Seoul National University Graduate School of Environmental Studies Professor: If once in a political banner chongryangje, hadamothae national presidential election will not hang a few more, this is the mind that want to show some effort Toka voluntary agreement.]