What will Thomas Pesquet's mission be on board the ISS?

The French astronaut had participated in more than a hundred scientific experiments during Proxima, his previous mission. His second, Alpha, which will start this Thursday, will be just as busy. 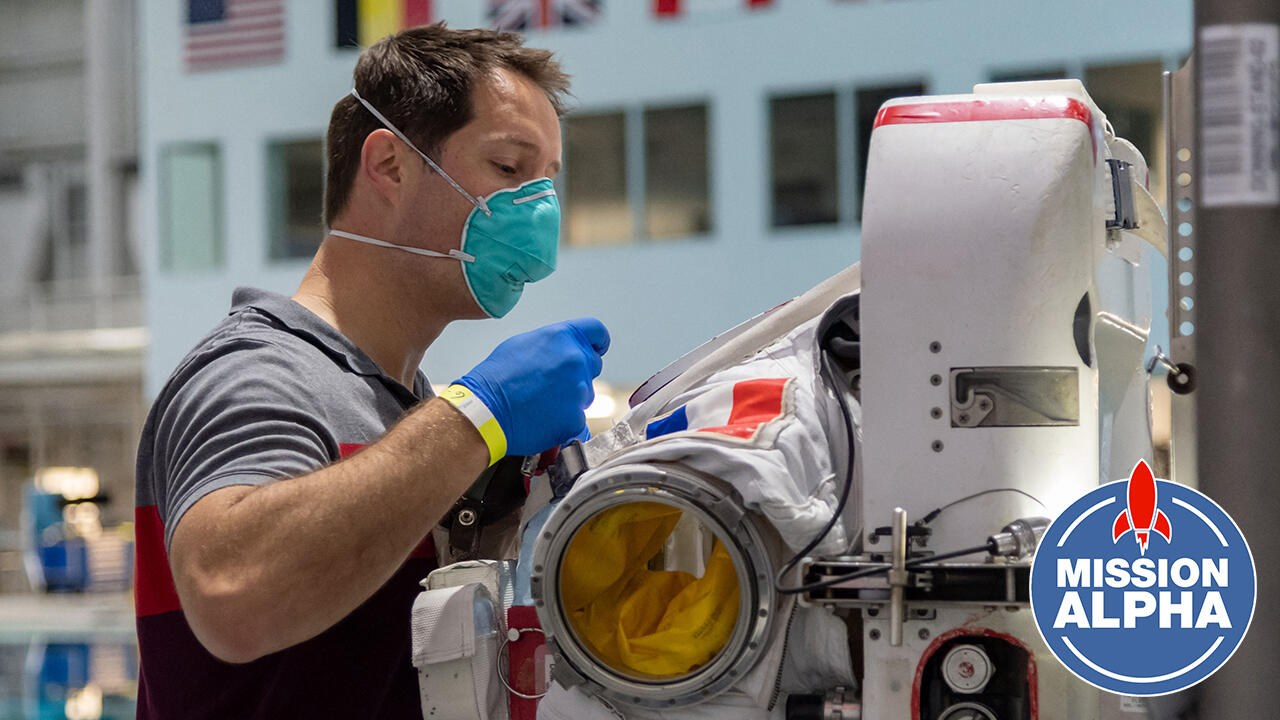 What will Thomas Pesquet's mission be on board the ISS?

Thomas Pesquet training for the Alpha mission, in July 2020, in Houston.

The French astronaut had participated in more than a hundred scientific experiments during Proxima, his previous mission.

His second, Alpha, which will start this Thursday, will be just as busy.

From our special correspondent in Cape Canaveral,

The daily life of an astronaut aboard the International Space Station is very busy: you first have to take care of the craft, one of the most complex human structures, which requires several hours of work per day. You also need to take care of yourself: micro-gravity weakens muscles and bones; two hours of daily sport are necessary to limit the effects. Finally, there is what the astronauts are on board for: science, with

the realization of experiments

impossible to carry out on Earth: “

The first objective of the Station is to be able to observe phenomena which are not subject to gravity,

All fields are concerned, whether fundamental physics, chemistry, biology or even botany. “

You have to see the Station as a unique laboratory in the world. It is in space because that is where we find these special conditions, but it is not a space laboratory,

”continues Sébastien Barde. Thus, the benches of this laboratory are open to the various scientific communities who wish to take advantage of this environment to carry out their experiments. “

The difference with the soil is that it must be trained to use this laboratory, which is still very special. When he goes up there, we say to him:

"these are all the experiences that you will have to carry out".

But they weren't specifically designed for him.

This “exceptional laboratory technician” work concentrates a very large part of the time dedicated to science in space. That said, when a national astronaut leaves for space, his space agency - in this case the European Space Agency and CNES for Thomas Pesquet - can tailor a program for him. For the French astronaut's Alpha mission, this takes the form of 12 experiments designed by Cadmos, the CNES Center for the Development of Microgravity Activities and Space Operations. “

The Alpha mission is a mission of ESA, the European Space Agency. In this context, we have a national contribution

”, explains Rémi Canton, project manager of the mission at CNES.

We have a set of twelve experiments, but choices had to be made because there is a very strong demand from the scientific community. We have tried to keep a balance between three poles: scientific, technological and educational while covering a fairly wide range of fields; life science, physics, preparing for the future with advanced technologies

. "In this sense, we feel a change in philosophy since the previous mission of Thomas Pesquet, Proxima in 2016: it"

was very access to health. Alpha is more about exploration,

This reflects a change of direction on the part of NASA, which sets the main lines.

For three or four years, with the announcement of the return to the Moon with the Artemis program, the emphasis has been placed more and more on the exploration and preparation for this trip and that to Mars.

Such a journey has in particular effects on the cellular aging of the brain.

Outside the atmosphere, it is in fact more subject to space radiation.

To better understand this phenomenon, Thomas Pesquet will therefore work on nerve cells for the

(brain aging). It will be a question of proving that the culture in space of nerve cells and their return to Earth for analysis is possible. This experiment is therefore above all a technical demonstration, which, if successful, will make it possible to refine the experiment to better understand this mechanism of cerebral aging. This will have repercussions for future space travel, but also on Earth by providing a better understanding of the functioning of certain genetic diseases such as progeria, which causes premature aging in children.

At the same time, Thomas Pesquet will also participate in the Lumina experiment, which consists of measuring more precisely the level of radiation to which astronauts are exposed.

The stake is paramount: on board the ISS, the crew receives a dose of radiation on average 100 times higher than an earthling, and this dose level only increases as it moves away from the Earth.

The precise measurement of these levels is therefore crucial to protect astronauts from a future Martian trip.

Thomas Pesquet in the ISS during his first mission, in 2016. ESA / NASA

Study of sleep in space

Always with a view to preparing as well as possible a mission lasting several years to the red planet, Thomas Pesquet will also participate in an experiment to study the sleep of astronauts. Their day / night cycle is indeed greatly disturbed: the Space Station circles the Earth in 90 minutes, astronauts therefore witness 16 sunrises and sunsets per day. Dreams is thus a headband equipped with an encephalographic sensor which will allow the study of Thomas Pesquet's sleep on board the ISS. This data will be compared with that taken before the flight, and the sensor will remain in the Station after the

so that other astronauts can complete the database.

Another experience prepares both the trip to the Moon or Mars, and also has a direct application on Earth: Eco Pack. “

Any experience that we board the Station must be packed, to withstand the vibrations of the launch,

The problem is that on board, these packaging are no longer useful, are bulky, and are even a little polluting since they are derived from hydrocarbons. We therefore wondered if we could not do something more virtuous on our scale.

”Thus was born the idea of ​​reusable packaging, even edible. "

During feedback, Thomas told us that he was so fed up with these wrappers that if he could eat them, he would!

So we took it at its word, and we developed it into gingerbread or Genoa bread

The blob is a

, neither animal, plant, nor fungus, capable of moving and even learning.

Physarum polycephalum, its scientific name, will be sent to space where Thomas Pesquet will study its development in micro-gravity.

Partner schools will also receive a copy and will be able to compare their development with that on board the ISS.

In parallel with all these experiences, the mission of Thomas Pesquet should also know some notable events.

Four spacewalks are planned during his stay on the International Space Station.

They have not yet been assigned but it is likely that the astronaut performs at least one.

He already has two on his account, carried out during the Porxima mission.

He had done them then with the American astronaut Shane Kimbrough.

The latter will also

rediscover life in the ISS

, since he will take off like Thomas Pesquet this Thursday, April 22, in the company of his compatriot Megan McArthur and the Japanese Akihiko Hoshide.

► The Alpha mission is live on RFI!

Throughout his stay aboard the International Space Station, Thomas Pesquet will share his daily life with RFI listeners.

Every month, the French astronaut will tell us in a video logbook the highlights of his mission.