Japanese billionaire offers eight seats for trip around the moon

`` I invite you to join me on this mission, '' explains in a video released Wednesday the Japanese tycoon Yusaku Maezawa, who has bought all the seats aboard a shuttle that is to make a trip around the Moon in 2023 . &amp; nbsp; 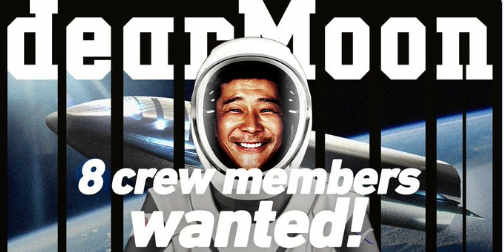 "I invite you to join me on this mission," said Japanese magnate Yusaku Maezawa in a video posted Wednesday, who has bought all seats on a shuttle that is scheduled to travel around the moon in 2023.

It's the kind of opportunity that comes only once: Eccentric Japanese billionaire offers eight tickets to people around the world to accompany him on a space tourism trip around the moon, slated for 2023 with SpaceX .

"Every person who does something creative"

Initially, he planned to find a girlfriend for his flight around the Moon, by launching a strange contest with "single women aged 20 and over".

He then changed his plans, not without having attracted nearly 30,000 applications, saying he wanted to invite six to eight artists instead.

In a video posted on his Twitter account on Wednesday, the billionaire, 45, finally opted for a broader hiring policy, saying he now believes "everyone who does something creative can be called an artist."

Get your FREE TICKET to the MOON !!

“I invite you to join me on this mission. Eight of you from all over the world,” he said.

"I bought all the seats so it will be a private trip."

Applicants will only need to meet two criteria, he said: be willing to "push the limits" of creativity and be willing to help other crew members do the same.

In all, about 10 to 12 people are expected to participate in the expedition supposed to circle the moon before returning to Earth, said Yusaku Maezawa.

The schedule calls for aspiring astronauts to pre-register by March 14, with a first selection due a week later.

Two prototypes of the rocket crashed on landing

No deadline is given for the next steps - a "mission" and an online discussion - but final interviews and medical exams are scheduled for late May this year, according to the billionaire's website.

Yusaku Maezawa and his companions will become the first lunar travelers since the last American Apollo mission in 1972, at least if SpaceX is able to complete this project on time.

Two prototypes of his Starship rocket have crashed on landing in recent months.

“I am very confident that we will reach the orbital level with Starship before 2023 and that the safety will be sufficient for human flight in 2023. It is very promising,” said Elon Musk in the video of Yusaku Maezawa released. Wednesday.

A first space tourism mission in 2021

It will host the American billionaire Jared Isaacman, who also offered three seats at his side.

Her first elected, announced at the end of February, is a 29-year-old American survivor of pediatric cancer