This is the first time that the descent to the surface of Mars has been filmed, and the result is at the level of expectations 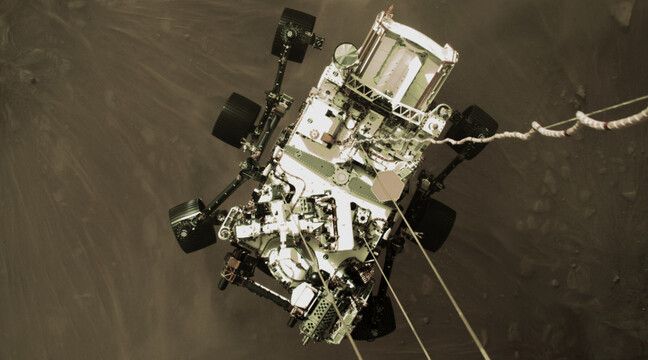 On Monday, the US space agency unveiled a historic video of the landing of its Perseverance rover on Mars.

This is the first time that the descent to the red planet has been filmed.

In the end, everything worked except the microphone, with a transmission problem that does not detract from the feat.

Perseverance carried seven cameras to capture the final approach to Mars from all angles.

We see in turn the deployment of the supersonic parachute, which allows it to slow down from more than 1,600 km / h to 320 km / h.

Then comes the separation of the heat shield that protected the rover from atmospheric friction, with hellish temperatures reaching 1,300 degrees.

While the on-board computer searches for an ideal site to land, one can admire the dunes and the relief of the crater of Jezero, an area of ​​nearly 50 km in diameter which probably sheltered a lake 3.5 billion years ago. 'years.

The sound of martian winds

In a perilous moment, the descent stage lowers the rover to the surface of Mars via several cables.

The plume of retro-rockets is invisible to the naked eye, but you can see their breath chasing the sand.

The descent stage can go up and crash a little further.

Perseverance, which has already sent in several pretty photos, will get to work in the coming weeks.

The rover must in particular take samples of clay soil to, perhaps, detect traces of past life.

But we will have to wait until these tubes are brought back to Earth by a future mission to be analyzed there, if all goes well in ten years.

Meanwhile, Perseverance has, for the first time, recorded the sound of Martian winds.

Close your eyes, turn up the volume and listen: you are on Mars.

Perseverance on Mars: Can we (and should we) speak of economic profitability with the conquest of space?

Perseverance on Mars: Why this mission is essential in the continuation of the Martian exploration