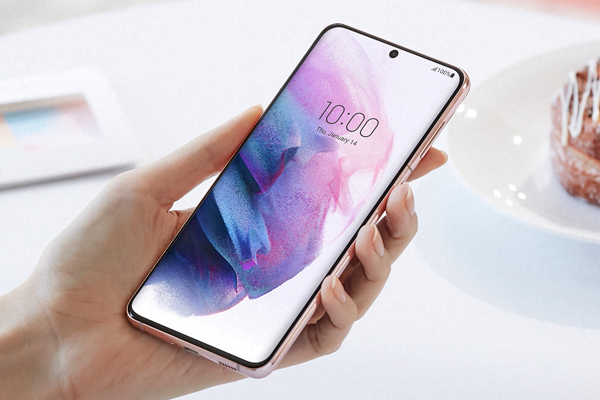 , made up of three mobiles:

, each bigger, with better features and a more colorful and contrasting design than to come. being the norm in the industry.

The new Samsung mobiles have new colors (up to 11), a matte finish and

that fuses with the metal that surrounds and protects the edges of the mobile.

Although all mobile phones today seem the same from the front, at least behind there is some variety and, in the case of Samsung, it is far from what Apple does.

is a slightly superior model, with a larger 6.7-inch screen and a 4,800mAh battery.

Finally, the most advanced model,

All phones look the same from the front: screen and camera hole

They will be available from

(they can be reserved from January 14) and each model will have a price:

the battery work in a more intelligent

and specific way, resting completely when we do not use the mobile and adapting the power required by each action we execute on the mobile, because it is not the same to play a game. video game (Samsung has an agreement with League of Legends: Wild Rift) to send a WhatsApp message.

The three models will have 5G coverage and the same processor, which in Spain is the

, which this year seems to have closed the fence with respect to Snapdragon processors and promises an almost similar power.

The screens of the three phones, despite having different sizes, are

, have a new fingerprint reader on the bottom and have technologies to regulate the brightness, the blue light emitted and recognize where it is touched to adapt the image to the user's eyes.

Its resolution is FullHD (1080p), except for the S21 Ultra, which reaches QHD (2K) resolution

Cameras are the key

But what Samsung has boasted the most is its cameras, which

record video in 8K, HDR and have a remodeled interface

to make it easier to use while reorganizing the zoom options, switching between photography and video or Quick settings to capture better snapshots.

It will be possible to record video with more than one camera, thus allowing, for example, to record your daughter doing a trick and your reaction face with the selfie camera.

These changes in the use of the cameras

, such as portraits that are more natural and can be corrected once the photo is taken;

slow motion videos that can be edited to highlight the moments that the user wants;

or a more powerful stabilization mode so that the image does not shake when zoomed in depth.

We can give up the Note mobile game

Of course, the mobile with

the best cameras will be the highest-end, the Galaxy S21 Ultra

, which has a second 10x zoom module and better lenses.

Thus, it has a 108 megapixel sensor to take sharper photographs, the possibility of making 3 or 10x optical zoom (up to 100 by software), a better night mode for night photography, it can process

and 4K video can be recorded with all four lenses.

Beyond photography, it also stands out that the screen of the Galaxy S21 Ultra is capable of working at

, which is not usually the norm.

compatible with the S-Pen

, the pen that until now was only possible to use with Samsung's Note range.

Since it seems that this range is doomed to disappear, Samsung seems to have decided to allow its use with its other range of premium mobiles.

Along with its new terminals, Samsung has announced new bluetooth headphones, the

They have a small size, a polished design and resistance to water and sweat (IP67).

They abandon the bean design of their predecessors last year, but Samsung promises that they are comfortable, that they separate the sound very clearly, that better calls can be made thanks to the greater number of microphones.

The application dedicated to the Buds Pro allows you to manage noise cancellation and how powerful it is, although the brand ensures that this can be managed automatically.

Headphones recognize when you are speaking to deactivate the soundproofing and let you hear the answer, for example.

When it comes to pairing them, by opening the case, the Buds Pro will automatically connect to Samsung phones.

Its battery with the case promises to be more than 30 hours.